Cooking the Books: A Glimmer of Death by Valerie Wilson Wesley 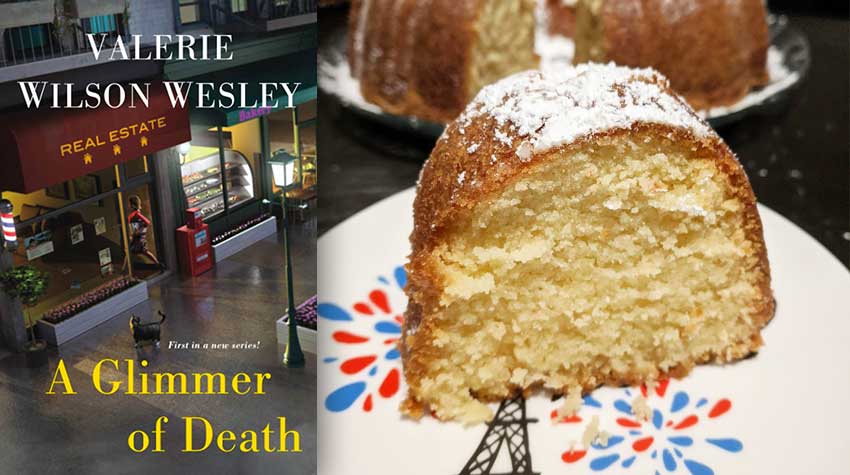 I’m so pleased to be able to kick off Black History Month in this column with an #OwnVoices culinary cozy mystery series debut!

Dessa Jones is a 40-something widower who’s a little resentful that her familial gift of second sight—usually manifesting itself in glimmers or scents—didn’t foretell the sudden demise of her beloved husband, Darryl. Unable to bring herself to continue the catering business they’d started to supplement his teacher’s salary, Dessa gets a job working for Risko Realty. She harbors the hope that forcing herself to work in an office with others will go some way to assuaging the loneliness that’s plagued her since Darryl’s death a little over a year ago.

Unfortunately, her boss, Charlie Risko, is a poisonous human being, and his attitude makes for a strained work environment despite the friendships Dessa is kindling with several of the other agents. When Dessa is assailed by the overpowering scent of nutmeg—a scent she knows foretells death—while at work one day, she hopes this is only further proof of the unreliability of her gift. But then, Charlie is found shot to death in his office, and Dessa realizes that her gift, at least in this case, did not lead her astray.

So when her gift is also very clear as to the innocence of the co-worker arrested for Charlie’s murder, Dessa knows she can’t just sit by and let poor Harley Wilde go to prison for a crime he didn’t commit. But how on earth is she supposed to help exonerate him in a way that doesn’t put her in the crosshairs of a killer who’s likely one of her very own officemates? With the help of her exasperating Aunt Phoenix and the handsome ex-cop who runs her favorite barbecue joint, Dessa is about to find out.

I am a sucker for a good paranormal mystery, and for the cast to be predominantly Black is just icing on my enjoyment of this satisfying culinary cozy. A Glimmer of Death feels so thoroughly modern, from its middle-aged heroine struggling to make ends meet to the steady gaze leveled at how it feels to be part of a minority in 21st-century America. I was a little concerned at how the ending seemed to wrap up the subplots completely, but I have been assured that there will be more books featuring Dessa, her sleuthing, and the wonderful treats she bakes!

Included in this volume is the recipe for one of those treats: 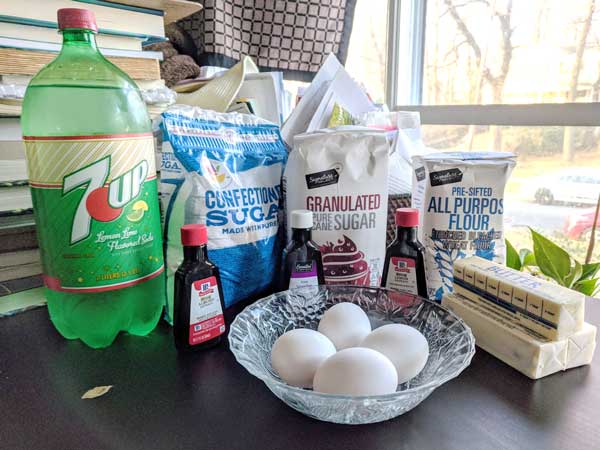 1 teaspoon almond extract (If you like a lemony taste, use lemon extract instead of almond—or use all three if you dare.)

Confectioner’s sugar for dusting, when the cake has cooled

Preheat the oven to 325 degrees F.

Grease and lightly flour a 10-inch tube pan (or fancy Bundt pan) and set it aside.

In a large bowl, cream the butter and sugar. Add the eggs one at a time, and beat well each time you add one. Add the flour and the extracts. Beat well. Gently fold in the 7-Up, ¼ cup at a time.

Pour the batter into the prepared pan. 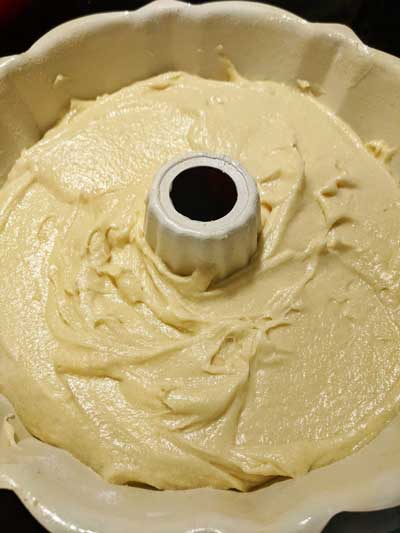 Bake for 1 ¼ to 1 ½ hours. You’ll know it’s done when you poke a toothpick into the cake and it comes out clean. Transfer the cake from the oven to a wire rack and let it cool for 15 minutes.

Unmold it on the rack and let it cool completely, and then, and only then, dust it with as much confectioner’s sugar as your heart tells you to. 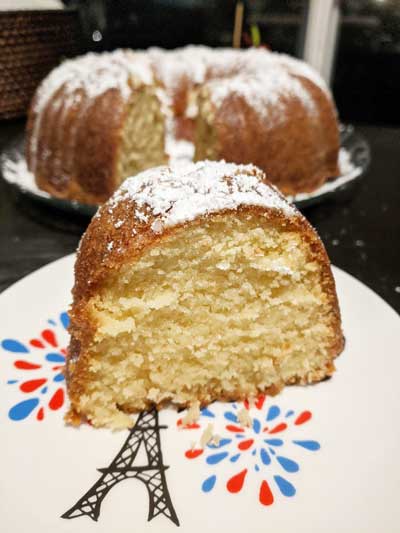 For some weird reason, my husband bought extra-large eggs instead of our usual large, and I might have compensated incorrectly for that while baking this. I don’t think it affected the final product, though the texture was a little bit denser than I expected. Nonetheless, it was still very delicious!

Being the adventurous sort, I used half a teaspoon of almond extract and half a teaspoon of lemon, and I think the blend came out quite nicely. I probably did use a little more confectioner’s sugar for dusting than I should have—the cost of not thoroughly buttering my Bundt pan was a less than perfect cake unmolding that I thought to cover up with the sugar—so if you don’t like tremendous amounts of sweet, go easy on the dusting. Otherwise, I can see why this is Dessa’s “Go-To Cake,” even as I’m super intrigued by all the chocolate goodies she also mentioned in the novel! Hopefully, we’ll get to see some recipes for those in upcoming installments.

Next week, we leave America altogether for balmier—if still murderous—European climes, while cooking up a delicious sauce. Do join me!

See also: Cooking the Books: A Room with a Roux by Sarah Fox