Cafe owner and caterer Val Deniston is looking forward to her Maryland town’s annual Dickens Fair, held every year in early December. Her grandfather Don is slightly less enthused. He’s been replaced as Santa by newcomer Jake Smith and has been given the role of Scrooge instead. While he tries not to let his assigned “bah, humbug” persona sour his mood and the festivities overall, things come to a head at the volunteer tea held to thank reenactors for their participation at the end of the day. Jake’s alarming behavior is already draining any enjoyment Don and Val were having of the festival even before Jake abruptly falls over dead.

Val is certain that the limping figure of the Ghost of Christmas Present, who distributed gingerbread cookies with skeletal icing to the assembled volunteers before vanishing as mysteriously as it arrived, was responsible for Jake’s death. But no one knows who was under the mask, and while Jake certainly had enemies, Val and her part-time private investigator granddad are stumped as to who might have hated him enough to want him dead. But then, more Bayport residents start turning up poisoned, with no seeming connection to one another. Could a serial killer possibly be on the loose in Val’s bucolic Eastern Shore town?

Gingerdead Man is the intricately plotted seventh book in the Five-Ingredient Mystery series. I very much enjoyed it even as it had me totally guessing (wrongly) right up until the very end, in an excellent feat of fair play plotting. I also really enjoyed getting to spend time with Val’s family and friends, particularly Granddad, and even her newish boyfriend, Bram, whom I guess is starting to grow on me. Anyone that good a son can’t be all bad in my book. This was also a wonderfully seasonal cozy mystery to start getting us in the holiday mood!

One of the coolest things about this series is that all the recipes, in keeping with Granddad’s themed cooking column, require only five ingredients (with optional add-ons for those who want to get a little fancier). This volume included recipes for six of the dishes mentioned in the book, and I decided to try this one:

Preheat the oven to 350 degrees. 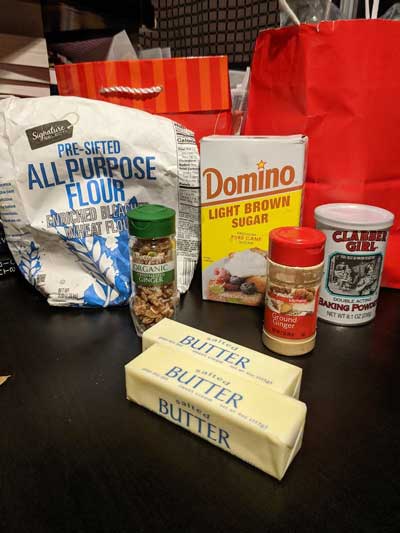 Mix the dry ingredients together.

Melt the butter and add it to the dry ingredients.

Add the chopped crystallized ginger to taste, one tablespoon if you’re not sure if you like it and two if you know you do.

Spread the mixture over the pan in a thin layer, pressing it down lightly with your fingers or the bottom of a glass.

Cut the gingerbread into bars (approximately 1 x 2 inches) while it is still hot. Leave it in the pan until it cools. Remove the gingerbread by lifting the parchment paper. 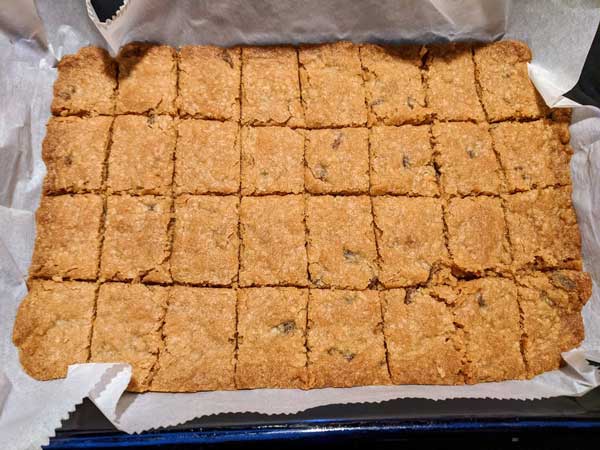 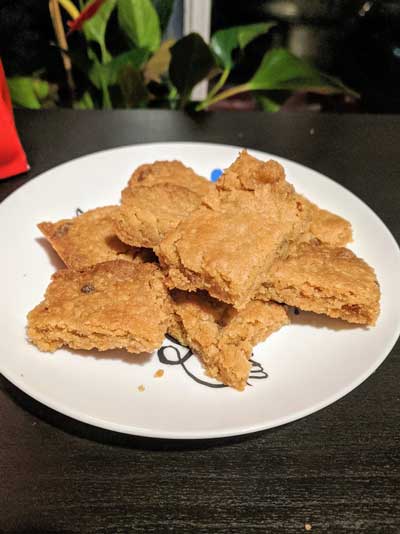 This gingerbread was so good that immediately after I tasted a sample I messaged my lovely assistant Karin, whom I haven’t seen in person since pretty much March, to tell her to look out for this column because she’ll definitely want to make this too! It’s so deliciously buttery and decadent, almost like shortbread but with the added kick of ginger to literally spice things up. I used two tablespoons of the crystallized ginger, naturally, and thought it perfect for my tastes. It’s also so easy to prepare and tastes like it was made by someone with greater professional skills than mine! This gingerbread is a wonderful alternative to the usual holiday cookie, especially if you cut it into bars for serving instead of my somewhat raggedy squares. I’m already planning on making another pan soon.

Next week, we head north a ways to spend time with not one but three amateur sleuths who know how to cook up a solution to dastardly crimes while whipping up a tasty quick bread. Do join me!