Sarah Blair is a little skeptical when her mother—who insists on being called Maybelle even by her own daughters—enters a reality TV show competition for Southern Belle brides to be. Her eyebrows rise even further when Maybelle tells her that she’s needed on set as her mother’s chaperone, in the grand Southern tradition of decorous, supervised courtship. Sarah is happy enough to humor her high-maintenance mother—in no small part due to her own congenial relationship with Maybelle’s fiancé, George—until she discovers that the role of chaperone means that she’ll have to stay with Maybelle at the bed and breakfast of her nemesis, Jane Clark, for the duration of filming.

Things go from bad to worse when everyone learns that the producers have decided that pitting Jane’s Place against Sarah’s own nearby restaurant, Southwinds, will make for an excellent reality TV subplot. Jane is the person most upset by all this, but when she’s found standing over the corpse of one of the producers with blood on her hands, Sarah’s first instinct is that Jane had nothing to do with killing him. Sure, Jane can be conniving and entitled, but Sarah just doesn’t see her as a killer. After calling the cops, Sarah also calls her boss, lawyer Harlan Endicott, asking him to give Jane any assistance she might need.

True to form, Jane is ungracious and contrary, but even she is shocked when the Southern Belle producers insist that the show must go on. Convinced that a killer lurks amidst the remaining crew and contestants, Sarah vows to investigate—in large part to protect Maybelle from any harm. But what will she do when the killer strikes again, setting off a firestorm of chaos and putting her own life in peril when she gets too close to the truth?

This is another solid installment of the Sarah Blair Mystery series, as Debra H. Goldstein dives into the nitty gritty of reality television, exposing the way contestants and viewers alike are manipulated into following storylines that belie the “reality” part of the genre’s name. All the contestants here were a hoot, and none more so than Maybelle and George, whose relationship we’ve been following since the very first book in the series. I also really like how Cliff, George’s nephew and Sarah’s former love interest, comes back into the picture, even if he and Sarah insist that they’re just friends (and even if I still think that she and Harlan make the best match out of all her potential suitors in these books!).

There were three recipes included here, and I couldn’t resist trying out this one: 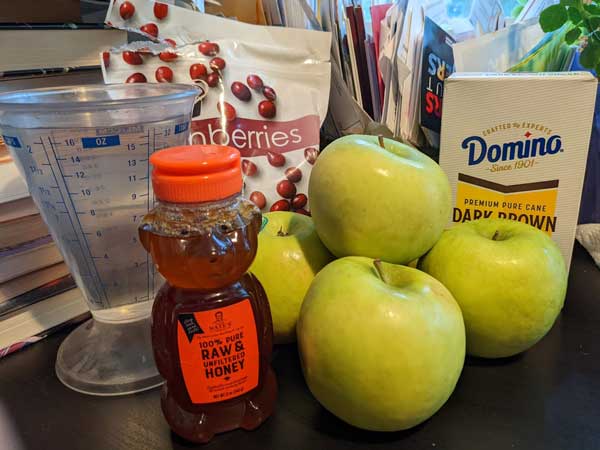 1 ½ cup of cranberries (works best with fresh ones)

Preheat the oven to 350 degrees.

Core the apples, removing the peel from the top third of each apple.

Place the apples in a baking dish.

Fill the core holes with cranberries. 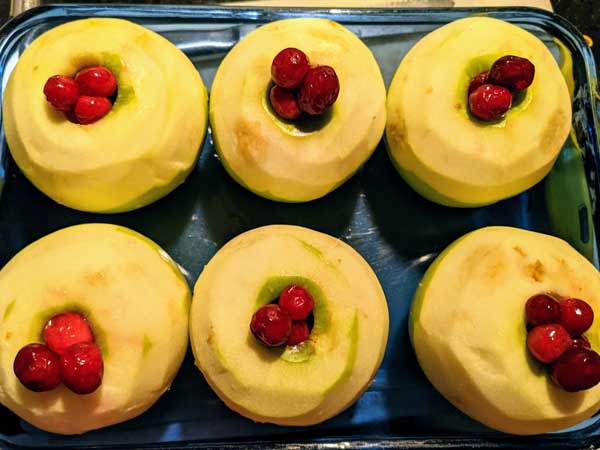 In a small saucepan, mix the water, brown sugar, and honey.

Bring to a boil. Note: Stir occasionally, making sure, if necessary, the sugar and honey dissolves.

Once boiled, pour the hot mixture over the apples.

Bake one hour at 350 degrees. Every fifteen to twenty minutes, baste with the juices. 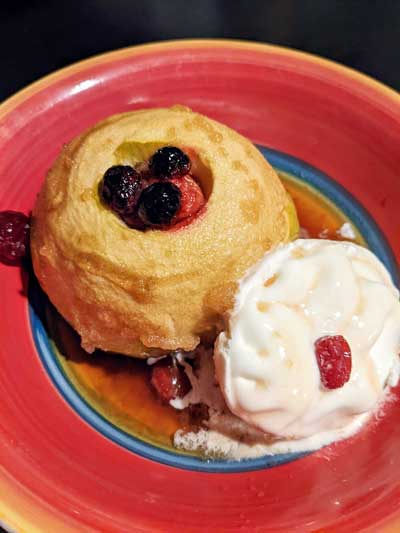 I didn’t have fresh cranberries available, so I made do with frozen, letting them defrost first before stuffing them into the cored apples. They tasted wonderful in this delicious, fruit-forward dessert! I sprinkled a few cranberries into the sauce too before baking it all up, as I do enjoy the contrast of sweet liquid with tart berry. The entire dish came out really nicely, especially with the creamy coolness of the vanilla ice cream introducing another flavor and sensory contrast to the rest of the hot, baked dessert. The apples came out at the perfect consistency too—soft but not mushy and a perfect textural background for the rest of the dish.

Next week, we travel to the West Coast to mix up a refreshing salad while getting to the bottom of what seems to be a fatal poisoning. Do join me!

See also: Cooking the Books: The Proof Is in the Poison by Diane Kelly