Cooking the Books: A Fatal Yarn by Peggy Ehrhart 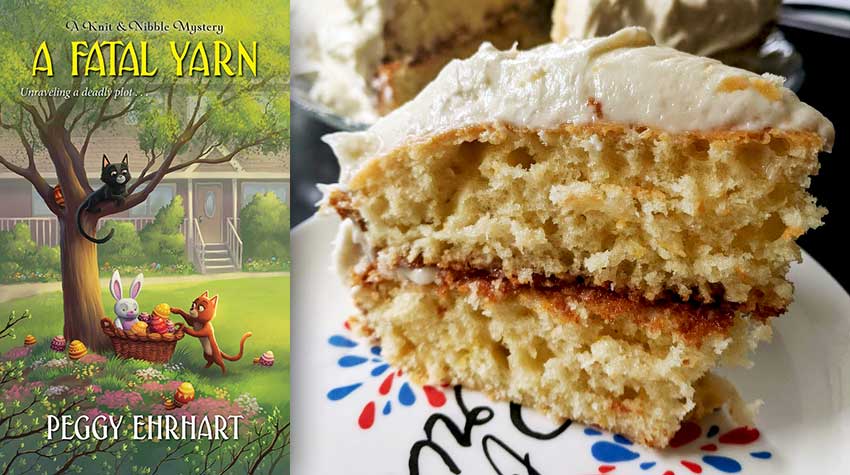 The fourth installment of the Knit & Nibble Mystery series came out right as the pandemic took hold here stateside, and I got a little lost in all the chaos. Fortunately, I was able to catch up with my favorite introverted cozy culinary sleuth before the latest book comes out later this month!

It’s another weekly meeting of Pamela Paterson’s Knit & Nibble group, and talk is all about the recent death of Mayor Bill Diefenbach, a pro-business politician whose pushes to increase Arborville’s tax base seemed to threaten the small-town character that many local residents love. Witnesses overheard Bill getting into an argument with an unseen suspect on the night he was killed, and further accounts have led to the police knocking on the door where the knitting group is having its meeting in order to arrest their sole male knitter, Roland DeCamp.

Roland is a prickly lawyer who’d been seen arguing with Bill on a separate occasion despite sharing political views. While he’d occasionally butted heads with other members of Knit & Nibble as well, the group knows that he would never stoop to murder. Pamela and Bettina, her best friend and across-the-street neighbor, quickly decide that they need to turn their own talents for investigation towards the effort of clearing their friend’s name. But who could have hated the mayor enough to resort to murder? And could his death have anything to do with the yarn bombs suddenly turning up all over town, to the mystification of Arborville’s residents and especially to the town’s premier knitting group?

I was really hooked on the idea of Roland being wrongly accused of murder, and I think that the main plot revolving around the murder mystery itself was very intriguing. I only wish as much time had been spent on it as with the otherwise interesting minutiae of Pamela and Bettina’s meals! I did enjoy the development of Pamela’s relationship with her neighbor Richard Larkin, even as I disapprove of new character Jocelyn’s opinion of black cats being a bad omen. Given a choice between Jocelyn and the cat, I would 100 percent choose the cat.

As always with books in this series, there was a knitting pattern included as well as a recipe, which I’ve lightly edited here for format:

Ingredients for the Cake 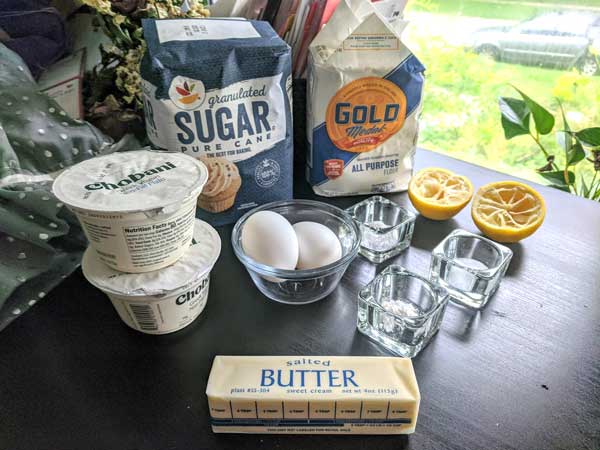 Juice and minced or grated rind of ½ lemon (about 2 tbsp. juice)

Ingredients for the Icing 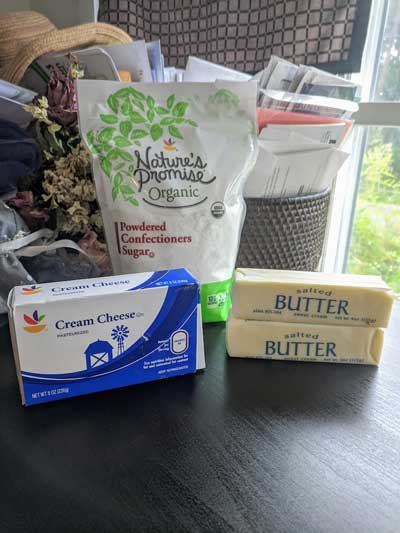 Set the butter and cream cheese out a few hours ahead of time to soften.

Sift the flour, salt, baking soda, and baking powder into a large bowl. Mix in the sugar using a large spoon. Crack the eggs into a smaller bowl and beat them lightly with a fork or whisk. Add the yogurt, lemon juice, and minced or grated lemon rind to the smaller bowl and use the fork or whisk to blend them thoroughly with the egg. Add the moist ingredients to the dry ingredients and blend them together with the big spoon. Blend in the melted butter.

Divide the batter between two greased and floured 9” cake pans and bake at 325 degrees for about 35 minutes. Test for doneness with a toothpick. If the toothpick comes out clean, remove the cake pans from the oven and let them cool.

Using a mixer, cream the cream cheese and butter until soft and blended. Add the sugar and continue to cream until fluffy.

Remove the cake layers from their pans. Place one on your serving plate and spread about one-quarter of the icing on it. Top with the other layer and ice the top and sides of the assembled cake with the remaining icing. 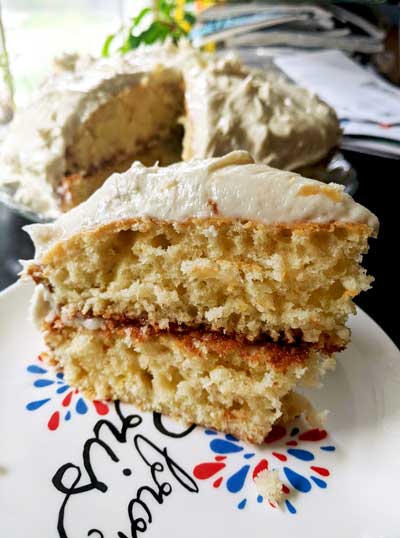 In addition to all the other reasons to miss my lovely assistant Karin, I do keenly feel the absence of her frosting skills, as mine are distinctly subpar. Fortunately, a cake doesn’t have to look amazing to taste wonderful, as this one definitely does despite my cosmetic hackery.

I used a zester (a gift from Karin oh these many months ago) to make easy work of the lemon rind and managed to squeeze out just enough juice despite my naughty children having gotten hold of the lemon prior to my work time in order to experiment with juicing it. This was a fairly quick and easy cake to put together, though I think the addition of a little lemon rind or juice to the frosting wouldn’t have gone amiss. I do like a stronger lemon flavor to my desserts, however, people who prefer something milder will find this cake perfect as is. I also wonder whether my using Greek yogurt instead of regular made for a slightly chewier texture than I’d originally expected; I’ll have to try this again with the latter to find out!

Next week, we catch up with my favorite competitive chef and crime solver to catch a wily killer while serving up some award-winning food. Do join me!

See also: Cooking the Books: Death of a Wicked Witch by Lee Hollis