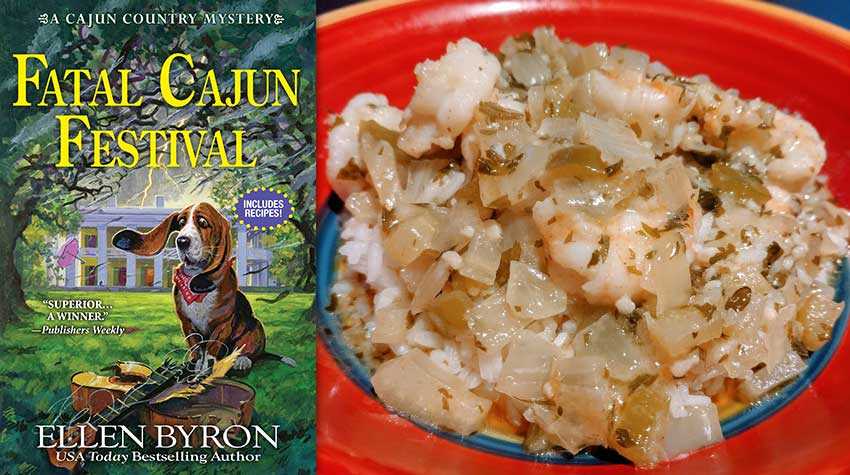 Maggie Crozat is pretty jazzed at her beloved grandmère’s idea for encouraging tourism during the slow season of their small Louisiana town. Hoping to take advantage of business on its way to the New Orleans Jazz and Heritage Festival, Charlotte Crozat proposes that Pelican should hold its own music festival on the Sunday to Thursday leading up to the bigger event. When Tammy Barker—a local girl made good through a reality singing competition program—agrees to headline, the Cajun Country Live! Music and Culture Fest looks to be a sure success.

So it’s a surprise to Maggie when her younger friend and co-worker, Gaynell Bourgeois, seems less than enthused by Tammy’s return. Gaynell is a talented musician herself who—with her band, Gaynell and the Gator Girls—is hoping to make an impression at both festivals. Gaynell finally confides in Maggie that Tammy had bullied her back in high school, so they’re both understandably wary when the country star and her team arrive to stay at Maggie’s family’s B&B.

At first, Tammy appears to have matured past her high school behavior, even offering to set Gaynell and her band up with her own manager, Pony Pickner. But when Pony makes an unwanted pass at Gaynell and Tammy’s proverbial claws start to show, Gaynell’s dreams of stardom begin to fade—and that’s even before Pony is found dead and Tammy accuses Gaynell of murder.

Even if Maggie wasn’t already an (unofficial) auxiliary member of Pelican’s police department, Gaynell’s plight would definitely encourage her to investigate. But it will mean pretending to break off her long-hoped-for engagement with handsome police detective Bo Durand in order to pose as a groupie on the rebound so she can uncover the secrets of Tammy and her entourage and find out who really wanted Pony dead.

This was another winning entry in the Cajun Country Mystery series, packed full of local color and pizzazz. I felt truly immersed in the music and the characters depicted, and I very much enjoyed the subplot regarding Grandmère’s efforts at döstädning, the Swedish tradition of paring down one’s belongings as the end of life approaches. It’s always a pleasure to come back to Pelican and enjoy the company of its denizens (and the cover art is definitely my favorite of the series so far!).

It’s also great to read about the mouthwatering food! Ellen Byron included recipes for five of the dishes described, and I decided to try out the following: 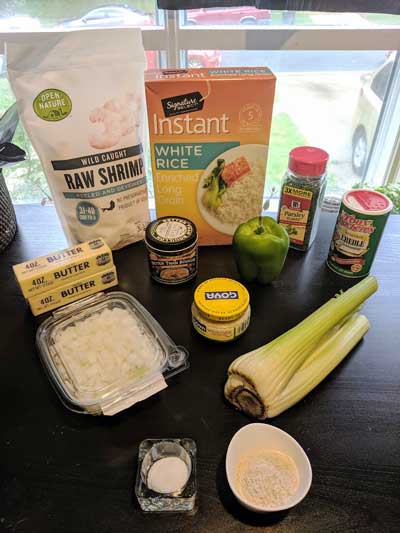 Using medium to high heat, melt the butter in a heavy, large skillet. Add the onion, pepper, celery, garlic, parsley, salt, and Cajun seasoning. Stir well to combine all the ingredients, then reduce the heat a bit and cook until the onion softens.

Add the flour, stirring well. As soon as the flour begins to stick to the bottom of the skillet, add the stock slowly until you’ve added it all to the mixture, stirring well to combine.

Simmer the mixture until it bubbles, add the shrimp or crawfish, and stir well. Bring the mixture to a bubble again, then reduce the heat to low. Cover the skillet and simmer the ètouffèe for ten to fifteen minutes, stirring occasionally.

Serve over 1 cup of white rice per serving. Or, if you want to make it low calorie, serve it over riced cauliflower instead of rice. 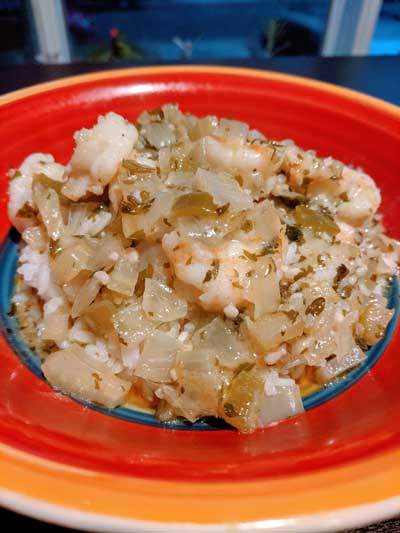 I used lobster stock with this dish because I’m fancy like that (and already had a bottle in my fridge). I figured it didn’t matter so long as I used something seafood-y, given the other options presented in the recipe. I am not, however, fancy enough to pass over the convenience of using instant rice. Neither choice detracted from the rich, velvety taste of this seafood, vegetable, and rice dish, though! Even my lovely assistant Karin, who doesn’t care for peppers, and my husband, who doesn’t care for celery, enjoyed the ètouffèe. Personally, I could have done with a little more of both vegetables, and perhaps more spiciness, but this easy recipe would serve as a great introduction to Cajun cooking for anyone wanting to explore the cuisine.

Next week, we head north to investigate murder and mischief on the banks of Lake Michigan while making delightfully gory Halloween candy. Do join me!