Cooking the Books: The Elusive Elixir by Gigi Pandian 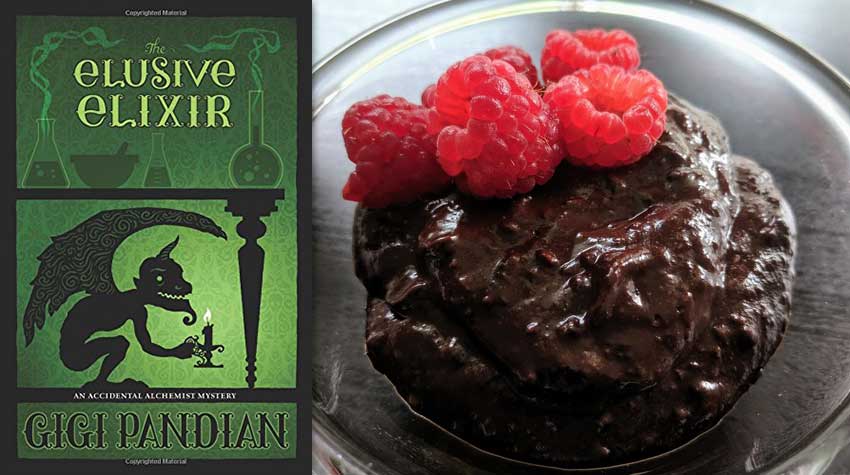 The third installment of the Accidental Alchemist mystery series finds our namesake alchemist in Paris following the clues unearthed in the last novel, The Masquerading Magician. Zoe Faust is convinced that coming back to the Notre Dame Cathedral will allow her to discover more clues to save the life of her best friend, living gargoyle Dorian Robert-Houdin. Unfortunately, while there, she runs into an elderly woman who claims to have known her during World War II and accuses her of witchcraft, as Zoe hasn’t aged a day since the 1940s.

Now, Zoe actually hasn’t aged—one of the perks of being an alchemist—but she’s also been careful about not leaving a trail, forging documents and moving judiciously from place to place in order not to arouse suspicion. She protests that the old lady must have mistaken her for her grandmother, but the other woman isn’t buying it and sics the gendarmerie on Zoe. The alchemist must flee Paris for her home in Portland, Oregon, but not before confirming that another living gargoyle exists and that backward alchemists may be better documented than she thought, if a helpful bookseller is to be believed.

Zoe barely has time to settle back into home life and admit her failure to Dorian when their teenage friend, Brixton, comes by with unsettling news. Zoe has been mentoring Ivan Danko, an ailing chemistry professor who discovered Zoe’s secret and wants to learn alchemy for himself. In Zoe’s absence, and without her knowledge, Dorian and Brixton were spying on Ivan to make sure his intentions were pure. Unfortunately, Brixton discovers that someone else is keeping tabs on Ivan as well. When Brixton follows this mysterious figure into the woods one day, he’s shocked to stumble across a corpse in the figure’s wake.

While Zoe’s boyfriend, Police Detective Max Liu, investigates the body, Zoe herself becomes more and more convinced that the mysterious figure is a backward alchemist himself—and that he isn’t the only one in town. Zoe must race against time to unmask whoever else may wish her and her friends harm, even as she seeks answers that could help keep Dorian alive.

This was a really satisfying ending to the story arc that occupies the first three books of the series. And while I’m sorry that the characters who went on the lam in this novel don’t show up in the next one, I’m very much looking forward to when they do return. I also enjoyed the developing relationship between Zoe and Max as well as the surprising appearance of a figure from the past who threatens to throw a wrench in their happiness. Gigi Pandian definitely hit her series groove with this book.

The Elusive Elixir also included three recipes, of which I decided to try the following: 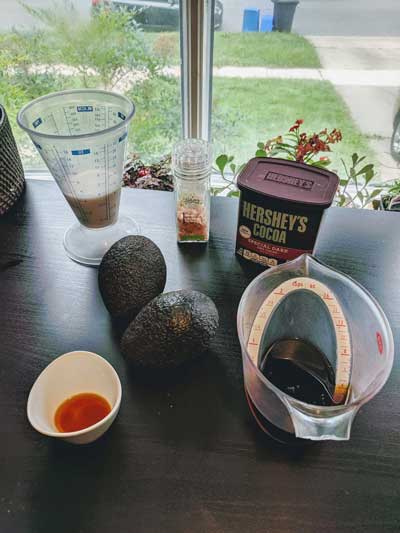 ¼ cup maple syrup (or ⅓ cup for a sweeter mousse)

¼ cup cashew milk (or other nut milk of choice)

Add all ingredients to a food processor. Puree for at least 1-2 minutes, until smooth and creamy. If lumps persist, stop the food processor and stir the mixture before resuming blending. 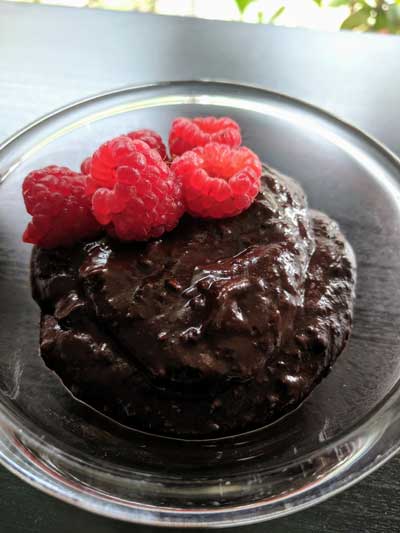 As this recipe makes two servings, I decided to double it up to feed my family of five plus my lovely assistant Karin (assuming slightly smaller servings for my three kids). I also used almond milk because it was the easiest nut milk to find; I’m not sure if cashew milk is as sweet, but almond definitely adds a nice bit of flavor to the mousse. I also added fresh raspberries on top for a delicious contrast.

That said, I thought this had a bit of a weird aftertaste that I couldn’t quite identify. No one else seemed to notice it, and after a few days of sitting in my fridge, the aftertaste definitely went away. Perhaps, it was because I used avocados that weren’t completely ripe; for those of you trying this at home, use completely ripe avocados as they’re so much better. Otherwise, it was a rich, chocolatey dessert that will satisfy not only vegans and those on a raw food diet but also anyone with a sweet tooth (who isn’t allergic to nuts).

Next week, we bid adieu to Portland and travel to the Midwest to enjoy a hearty lasagna while hunting down a killer. Do join me!