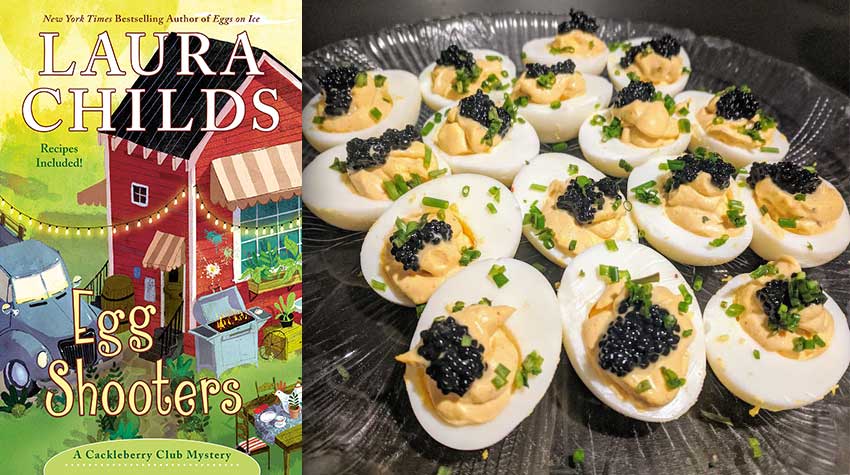 Laura Childs’s latest Cackleberry Club Mystery starts off with a heart-pounding bang! Our heroine, Suzanne Dietz, is heading to the emergency room to drop off a thermos of chili con carne for her surgeon fiancé, Dr. Sam Hazelet. She’s just gotten to chatting with Ginny Harris, the nurse at admissions, when a loud commotion draws their attention. A masked gunman bursts out through the dispensary doors, bearing a duffel bag full of stolen pills. When security guard Harold Spooner tries to intervene, the gunman shoots him down before Harold can even draw his gun. A distraught Ginny rushes to the fallen Harold’s side, and the gunman shoots her too. Her fight response fully engaged, Suzanne chucks her thermos of chili right in the gunman’s face, finally driving him out of the ER.

While medical staff hurry to aid Ginny and Harold, Suzanne runs outside to see if she can spot the gunman’s getaway vehicle and is baffled to find no trace of his escape. She reports all this to her good friend Sheriff Doogie but can’t help feeling personally invested in the on-going investigations. Still, she tries to focus on her business, running the delightful Cackleberry Club restaurant and knitting-and-book store with her two best friends, the outrageous Toni and the sensible Petra. They have several important events coming up that require their full attention, but the fact that the Cackleberry Club is a social hub for the town of Kindred means that leads and potential suspects are constantly coming through the premises. Suzanne passes along as much as she can to the overwhelmed sheriff, but some leads are too hot to pass up investigating herself. This leads to Suzanne and Toni getting into some really crazy situations—befitting a thriller novel—imperiling their own lives and, perhaps even more frightening for Suzanne, their relationships with the ones they love.

This was another exciting installment of the long-running culinary cozy series that features just as much crime-fighting as it does delectable food descriptions and recipes. I particularly enjoyed the different themed events the Cackleberry Club hosted as well as the loving attention paid to detail in the menus, decor, and entertainment of each. It was also interesting to see how Ms. Childs wove in all the different suspect plot lines, introducing new characters with various shades of suspiciousness. I wasn’t quite sure who to place my bets on as being the killer until near the very end!

As always, there are a wealth of recipes included in this volume. Of the ten, I decided to try out the one most closely linked to the title. 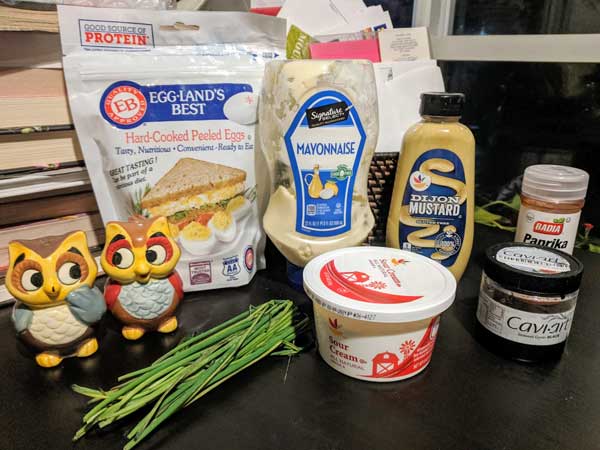 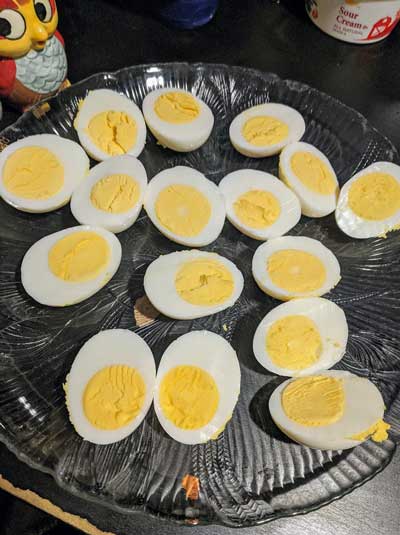 Place yolks in food processor and add mayonnaise, sour cream, mustard, paprika, and salt and pepper to taste. Process until nice and smooth.

Transfer mixture to a resealable plastic bag and snip off one corner. Pipe the yolk mixture into the eggs. 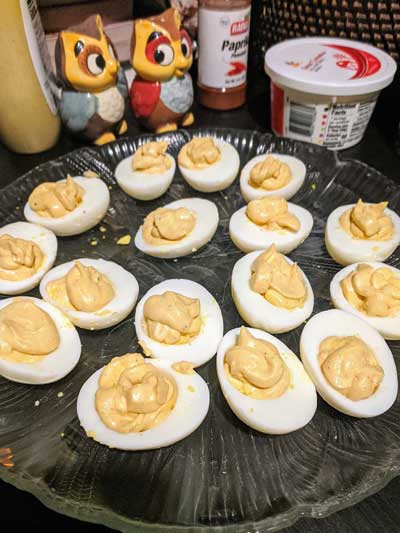 Top each egg with a generous teaspoon of caviar and a snip of chive. Yields 16 egg shooters. 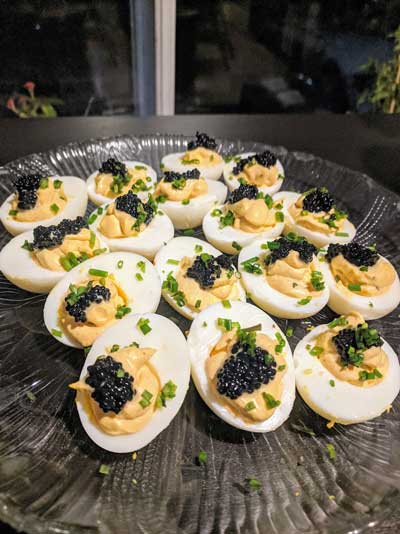 While this does differ somewhat from the eggs served at the Cackleberry Club’s Parisian-themed dinner, these were changes my family could definitely get behind. My husband doesn’t like celery so was glad for the omission of the same. Since we’ve both found creme fraiche to be a challenge to find at our local grocery stores, we were happy to see sour cream used in the recipe as printed instead. I was also feeling particularly lazy and decided to hand mash the yolk mixture; I think it turned out pretty nicely, but purists might want to stick to using a food processor to ensure a perfectly uniform taste and texture. I also went a little lighter on the caviar than recommended, in tweaking the recipe just slightly for my family’s preferences. A teaspoon is a lot, so I stuck with about a heaping quarter teaspoon for each shooter, just so that the caviar taste wouldn’t overwhelm the entire deviled egg otherwise. Of course, if you’d rather just use the deviled egg as a convenient delivery device for caviar, by all means, use the whole teaspoon. Overall, this was a very fancy presentation for deviled eggs that I’ll want to use again in the future!

Next week, we travel to Colorado to make another delicious apple dessert while solving murder most vile. Do join me!