Sage Caplin is taking her Ground Rules coffee truck on the road! Or at least to Campathon, an annual eco-friendly music festival held on a farm just outside of Portland, Oregon. She’s hoping that being the only coffee vendor at the festival will help recoup the cost of buying a second truck, as her first is still anchored in its prime downtown location. Ground Rules was actually lucky enough to be able to step up and replace the original vendor slated for the festival, and Sage is hoping this good luck will hold throughout the weekend run.

Alas, trouble starts almost as soon as she parks her truck when her immediate vendor neighbor turns out to be shockingly unfriendly. Campathon’s organizers are quickly on hand to smooth things over, but there’s little they can do when some of the bands and their entourages get into heated discussions right in front of Ground Rules. Sage can’t help being drawn in and is inclined to side with Maya Oliveira, the singer whose close friendship with Sage’s boyfriend, Bax, got Ground Rules this coveted spot in the first place. She’s even more sympathetic after hearing how Maya was ousted from her former band and how their manager, Ian Rabe, is waffling on sending Maya the royalties she’s earned.

Even so, Sage is utterly horrified when she stumbles over Ian’s corpse the very next morning. The cops immediately suspect both her and Maya, though Sage knows that Ian had had far more serious run-ins with people outside of the two of them. As she’s plagued by suspicious detectives, annoying podcasters, and malicious fellow food truck owners—not to mention concerns over exactly how close Bax and Maya are now that she’s able to observe them together over an extended period of time—Sage has to call upon the observational skills her con-artist mother taught her in her childhood in order to get to the truth. An innocent person’s life could be at stake otherwise—possibly even her own when a murderer realizes just how close she’s coming to the truth.

This clever sophomore installment of the Ground Rules Mystery series doesn’t feel quite as socially conscious as the first, which tackled meatier problems of homelessness and gentrification, but it definitely still has genuine, if less serious, Portland vibes. Double Shot Death embraces coffee and music culture in an entirely wholesome way, even as Sage has to puzzle her way through a murder mystery that is light on clues and heavy on suspects. Bonus points, too, for the introduction of an adorable orange cat who adopts Ground Rules for its own.

There were several drink recipes included here, but only one for food:

Ingredients for a single serving 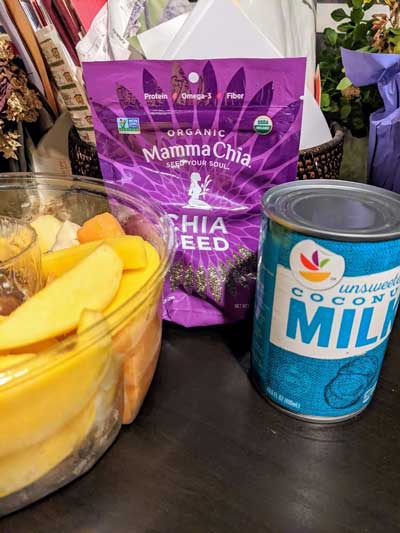 ½ cup coconut milk (or your milk of choice)

Ingredients for a week’s worth of pudding

Maple syrup or other sweetener

Peanut butter or other nut butter

Mix the chia seeds and milk in a bowl, and let the pudding sit for 5 minutes. Stir it again, taking care to break up any clumps of chia seeds, and add any optional add-ins.

Once everything is combined, put the pudding in the fridge to set for at least 2 hours, ideally overnight, before serving. 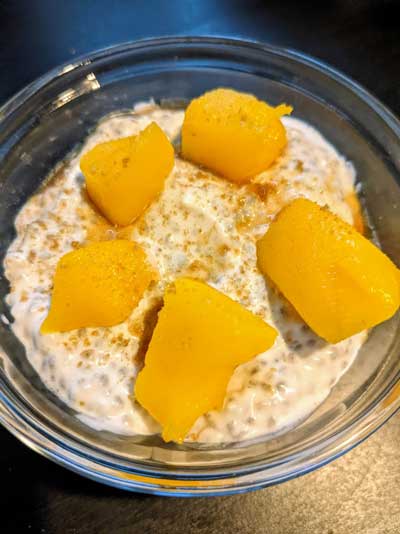 I’ve had chia seed pudding with other milks before and have been singularly unimpressed, so I was not prepared to be completely blown away by the use of coconut milk here! The rich and creamy end-product was reminiscent of the traditional sago coconut puddings of my Malaysian youth but required no cooking and very little effort to put together—honestly perfect for the warmer weather already rolling in where I am.

For my toppings, I decided, at first, to add only cut mangos but then decided to experiment by adding a sprinkle of brown sugar and a splash of vanilla extract. While the pudding on its own has a wonderfully delicate sweetness, I do think that the vanilla and brown sugar enhance it very nicely. The next time I make this (which will be sooner than later, as I have that whole bag of chia seeds to go through still), I’m planning to add the vanilla and brown sugar to the pudding before letting it set, then ripe cut fruit later. Mango is an excellent choice, but really any sweet, soft fruit would go well with this delightful dessert (or breakfast! It’s healthy!).

Next week, we stick around Oregon to solve the case of a disappearing dead body, while baking up a decadent treat. Do join me!