Cooking the Books: Died in the Wool by Peggy Ehrhart 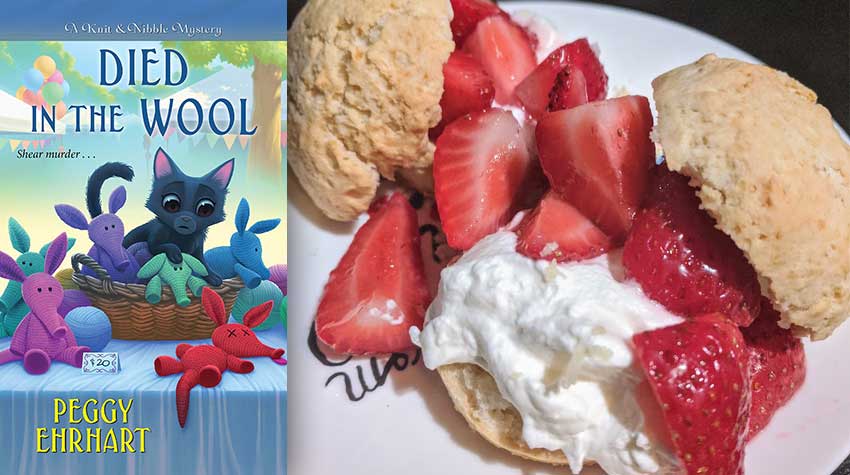 The second book in the Knit & Nibble Mystery series opens with Arborfest, the New Jersey town of Arborville’s annual celebration of civic pride. Our heroine, Pamela Paterson, and the knitting club she founded have set up a booth to sell knitted aardvarks, the local high school mascot, with proceeds going to help fund Arborville High. Even the school’s short-tempered football coach, Brad Striker, is pleased about that—though it doesn’t stop him from giving Pamela and her best friend, Bettina, an earful about people who dislike high school sports programs. One of his co-workers, history teacher Randall Jefferson, has recently published an op-ed decrying their football team in particular, and Brad is still steaming mad about it.

So when Pamela later finds Randall’s corpse tucked away beneath her knitting club’s booth with a knitted aardvark perched on his chest, she immediately suspects Brad of murder. Unfortunately, the other residents of Arborville have an entirely different idea, believing that one of the members of the Knit & Nibble group must have been responsible given the location of the body. When Pamela learns that one of her friends was not only neighbors with Randall but also has a key to his home, she knows this is the perfect opportunity to do a little sleuthing—okay, snooping—in order to help clear her knitting club’s name.

The weird thing about Died in the Wool is that I knew early on whodunnit, but I was so swept up in Peggy Ehrhart’s storytelling that I totally forgot about the culprit as Pamela and Bettina investigated all their leads. As always, I love how Ms. Ehrhart turns her kind heart and wry eye on human foibles, and I laughed long and hard when Nell had finally had enough of Roland’s griping. My only regret is that I did not have the energy to pick up my own knitting while reading this novel. It was, however, fun to vicariously enjoy the characters’ yarn crafting instead.

As with the other books in the series, instructions for a knitting project are included in the back, as well as a recipe! Here is what I made this week, edited lightly for format: 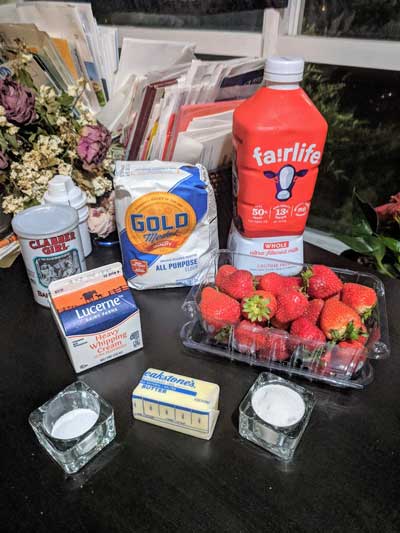 5 tbs butter, plus extra for spreading

Preheat oven to 425 degrees. Mix the dry ingredients in a bowl. Slice the butter into thin bits and add it to the bowl. Cut the butter into the dry ingredients with two knives, a pastry blender, or your fingers, until the mixture resembles sand. Sprinkle the milk over the mixture, tossing with a fork until the dough holds together. Flour your hands and a pastry cloth or board and knead the dough briefly until it forms a smooth ball.

With a floured rolling pin or your hands, flatten it until it is about ¾” thick. Now, using either a biscuit cutter or an inverted glass, cut out eight 2” rounds. You can use your fingers to shape the scraps into rounds or ovals too. Arrange your biscuits and scraps on a buttered baking sheet and bake at 425 degrees for 10 minutes, or until they are golden.

While the shortcakes are baking, prepare your strawberries. Wash and core them, and, depending on their size, slice them or cut them into halves or quarters. Sprinkle them with a tiny bit of sugar, a few teaspoons or less, to bring out the juice. 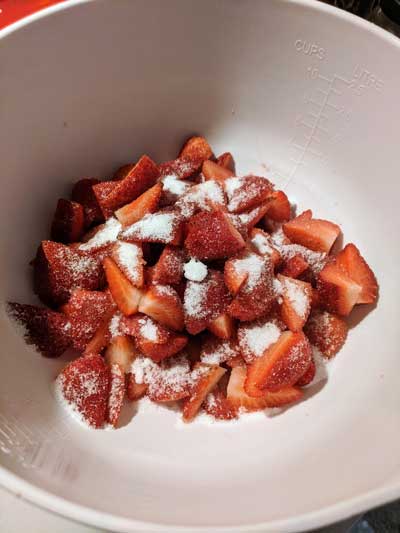 For a classic old-fashioned presentation, split the shortcakes while they are still warm and butter the cut surfaces. 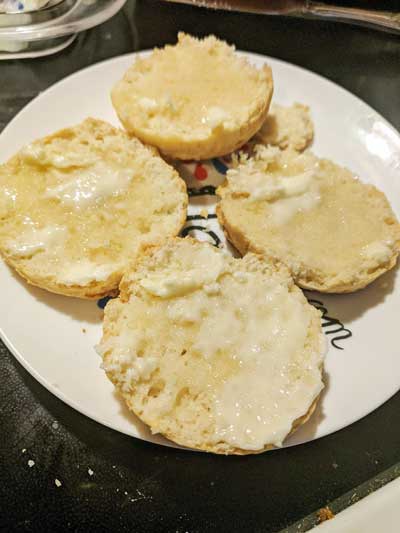 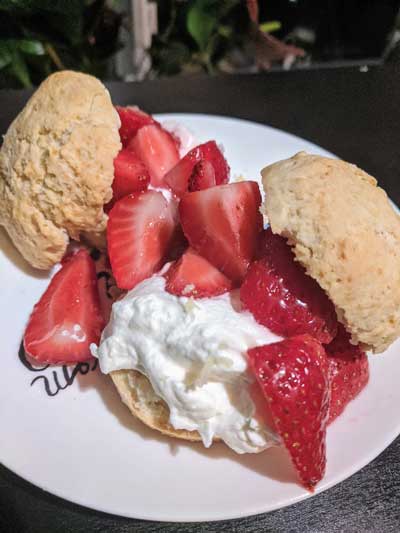 I love traditional strawberry shortcake presentations like this one, even though my biscuits wound up being very much on the small side. My first clue that I was doing it wrong was when I managed to shape 17 biscuits out of the dough instead of the 8+ listed in the recipe. Fortunately, that just meant more small biscuits to be eaten with the delicious strawberries and cream. I actually added a little more sugar to the strawberries and none to the heavy cream I whipped—though I did add a smidge of vanilla to the latter—and I feel like the balance of sweetness was perfect that way, especially with the biscuits already being on the sweet side themselves. It was also nice to have a recipe where I could continue working on the rest of the components while the bulk of it baked so I could concentrate on completing the dish all at once instead of having to wait between parts of it.

Next week, we travel north up the coast to enjoy another baked goodie while solving murder most foul. Do join me!