Cooking the Books: Death of a Wicked Witch by Lee Hollis 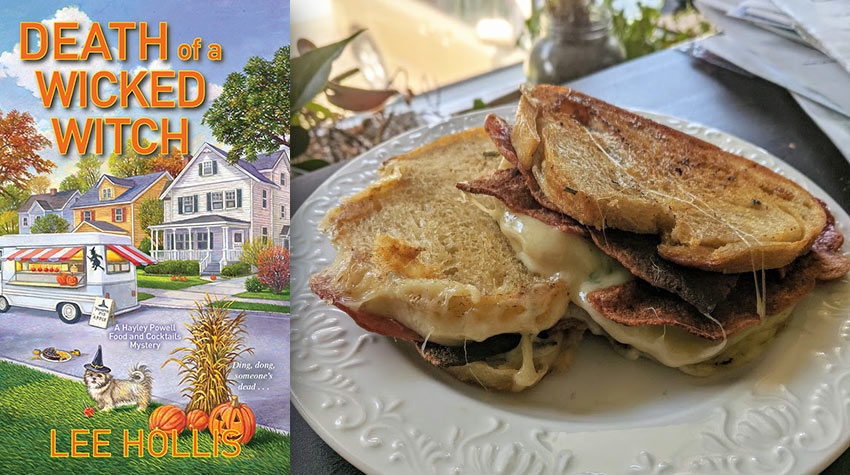 There’s a new food truck in town, much to the delight of our food columnist heroine, Hayley Powell, and the chagrin of Cloris Fennow, owner of the only other food truck in Bar Harbor, Maine. While the burgers Cloris serves out of Burger She Wrote are of varying quality, her attitude towards her customers leaves a lot to be desired. Unsurprisingly, Hayley isn’t the only one thrilled that Cloris is about to face some much-needed competition.

Enter Trudy Lancaster, the beautiful and bubbly young wife of the new Congregationalist minister, Ted. Her Wicked ‘Wiches food truck serves some truly outstanding and inventive sandwiches. When she’s hired to cater the Garbers’ annual Halloween Witches Ball, Cloris nearly blows a gasket, never mind that Burger She Wrote was never in the running for the gig anyway.

Cloris isn’t the only one whose emotions have been heightened by Trudy’s arrival in town, though. The retiring Reverend Staples seems to have lost his head completely over his successor’s wife, to the very public displeasure of his own wife, Edie. When Trudy is found gassed to death in her food truck on the night of the Witches Ball, there is, unfortunately, no shortage of suspects for what was clearly cold-blooded murder.

Hayley and her new husband, Bruce, had taken quite a shine to the Lancasters, so Hayley is determined to help her brother-in-law, town sheriff Sergio, crack the case. But when sightings of Trudy’s ghost start coming in from all over town, Hayley begins to wonder whether justice can be served before vengeance is meted out from beyond the grave.

This was another highly entertaining installment of the Hayley Powell Food and Cocktail Mystery series—spooky number thirteen, in fact! In addition to the ghostly hijinks are a whole host of relationship troubles that provide further emotional depth for our cast of characters. Hayley’s 20-something daughter Gemma is back in town with boyfriend Conner in tow, but the couple seems to have very different viewpoints on the state of their relationship. Tensions overall are played for good-spirited laughs, though, with Edie’s hilarious meltdown during her husband’s last sermon being just one standout. I was actually very pleased with the general feel of feminine solidarity in the face of atrocious behavior on the part of their menfolk, which made for a nice contrast from some of the attitudes of this novel’s immediate predecessor in the series, Death of a Blueberry Tart.

As with that book, however, there is a whole slew of themed food and cocktail recipes accompanying Hayley’s delightfully written column for the local newspaper. While Death of a Wicked Witch is set around Halloween, all of its food recipes revolve around sandwiches, which make for perfect summer fare as well. Of the seven recipes included, I decided to try this sandwich for all seasons: 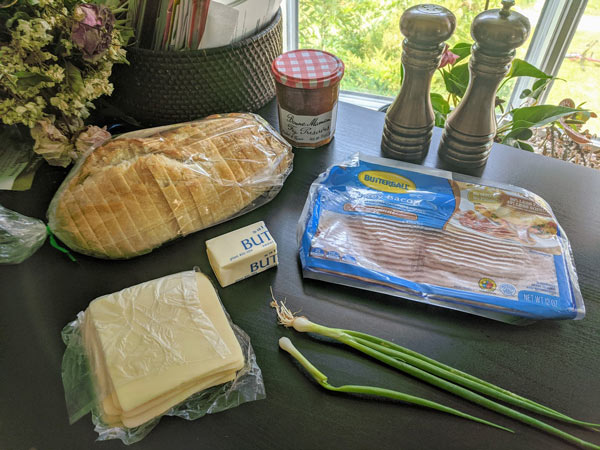 2 slices sourdough bread (or bread of your choice)

Add 1 tablespoon butter to pan and heat to medium low.

When bread in pan is toasted golden brown carefully flip your sandwich over and toast other side until cheese is melted and bread is golden brown on that side. Remove from heat, place on plate, slice in two, and enjoy! 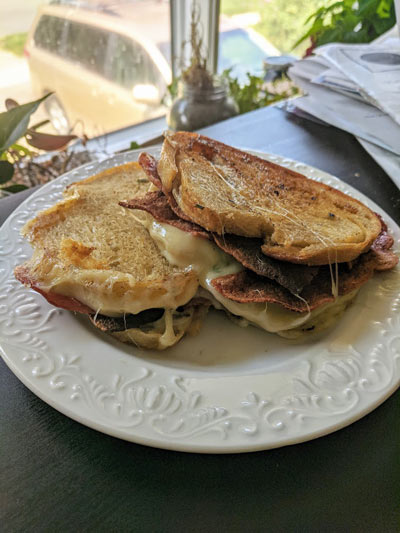 My main takeaway from trying out the resulting grilled cheese is to be very generous with your application of fig jam, or else it will be overpowered by the flavors of every other component of this otherwise tasty dish. I found myself dabbing the sandwich with more jam as I took each bite just to balance out all the delicious flavors. Personally, I love both a classic grilled cheese sandwich as well as one with caramelized onions, but adding bacon and fig jam is a delight at once comforting and decadent. This is definitely a recipe to keep handy for when you want to add just a little something extra to a comfort food staple.

Next week, we catch up with the latest in a series ahead of the upcoming release of its next installment, solving a murder here on the East Coast while baking a delicious cake. Do join me!