Cooking the Books: Death of a Kitchen Diva by Lee Hollis 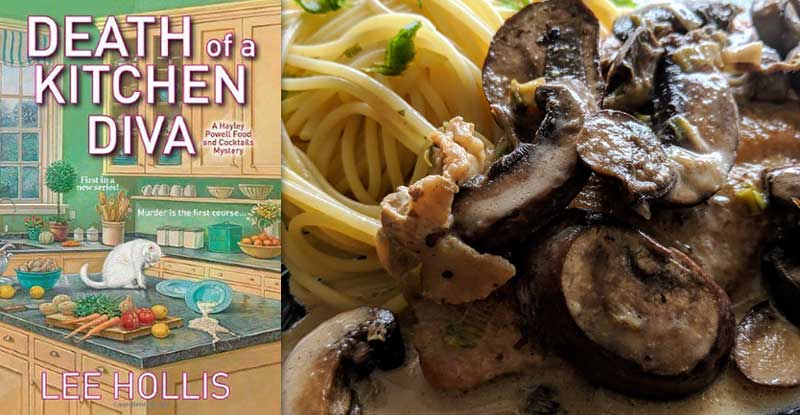 Hayley Powell is a 35-year-old single mom of two teenagers who works as the office manager at the Island Times, the smaller of two newspapers based in Bar Harbour, Maine. Her deadbeat ex-husband’s alimony checks don’t come as often as they’re supposed to, so when her boss, Sal, offers her a weekly cooking column for extra money, she finds it hard to say no.

Her food is always a hit with family and friends, but Hayley isn’t really a writer, so she’s plagued with self-doubt. Her insecurity isn’t helped by Sal taking a strong dislike to her chatty debut. When positive reviews start pouring in, however, even he’s won over to her conversational writing style.

One person who isn’t happy about Hayley’s success is Karen Applebaum, the food-and-wine columnist at the rival paper. Part of her anger stems from her certainty that Hayley stole her crab-stuffed mushroom recipe for Hayley’s first column. Of course, Hayley didn’t, but Karen’s revenge culminates in a bake sale food fight that has Hayley loudly proclaiming before dozens of witnesses that she will kill Karen.

These are rash words that mean little—until Karen turns up dead and Hayley becomes the prime suspect. For all that Karen wasn’t well-liked around town, no one else seemed to have disliked her enough to want her dead, much less make public death threats against her. When Hayley realizes that she’s being framed, she goes all out—with some help from her friends—to bring the real killer to justice.

Death of a Kitchen Diva is a light-hearted romp of a culinary cozy, as Hayley and her friends and family dash around Bar Harbour investigating Karen’s murder. Hayley is a very relatable protagonist with a delightfully quirky and diverse supporting cast. I also really enjoyed the format of her columns, which are included in their entirety in the book. She lays out a seven-course meal over as many weeks, leading into each recipe with charming anecdotes regarding her life as a mom and pet owner and murder suspect. Cocktail recipes often accompany each course. I decided to try out this entree for our own column this week:

Sauté chicken in a large skillet for 15 to 20 minutes or until cooked through and juices run clear when pricked by a fork.

Add green onion and mushrooms and sauté until soft.

Add the Marsala wine and bring to a boil.

Boil for 2 to 4 minutes, seasoning with salt and pepper to taste. Stir in the cream and milk and simmer until heated through.

I first learned to make chicken marsala in an Italian kitchen using chicken that had been pounded flat and lightly breaded, so I was a little hesitant to use just plain old chicken breasts here. I shouldn’t have worried, though. They turned out perfectly fine.

I did make a few small adjustments to how the recipe wanted them cooked, seasoning the chicken with salt and pepper before adding them to the skillet, then only sautéing them for 7 minutes on each side before adding the vegetables, etc., as I was concerned the chicken would dry out if cooked for too long. The end result was a very delicious dish that wouldn’t have been out of place in the Italian restaurant where I once worked. I served the chicken with a side of spaghettini, to the acclaim of everyone who tasted it. I’m definitely going to make this dish again!

Next week, we stick around Bar Harbour to check out the latest in Hayley’s ongoing misadventures—and to try out some nutty pastries. Do join me!