Buckle up, fans of the Death by Chocolate series, it’s going to be a bumpy night!

Jake Tiptree and Ellie White are dazzled when movie star Ingrid Merryfield steps into their Chocolate Moose Bakery one evening, interrupting their discussion over whether to keep their somewhat out-of-the-way store open for the winter. Ingrid has just bought Cliff House, a supposedly haunted manor way up on the cliffside of their Maine island town, and wants to throw a housewarming party for select guests. Towards this end, she’s intent on hiring Jake and Ellie to cater desserts.

There’s a weird proviso though: Jake and Ellie are required to stay overnight in order to keep serving sweets to the night owl guests. Jake is resistant to the idea, especially after visiting Ingrid up at the mansion. The place is creepy, and Jake is highly susceptible to the manor’s grisly history—but she’s even more susceptible to the large paycheck Ingrid is dangling in front of her. The sort of money Ingrid is offering for what should be a fairly simple affair would help keep the Chocolate Moose open through the winter. Ellie is enthusiastic, so Jake swallows her concerns and agrees.

At first, everything goes well. The dinner caterers are competent, and while the guests—who seem to be a mix of Ingrid’s Hollywood friends—certainly expect the best, Jake and Ellie know that their products meet the highest standards. With the help of Mika, Jake’s daughter-in-law, and Bella, Jake’s stepmother, the evening goes smoothly, with the guests enjoying dinner, drinks, and desserts in the beautiful, if irregularly maintained, manor.

But then, someone has the bright idea of bringing out a Ouija board, and the night just goes downhill from there. With unexpected storms and earthquakes racking the estate, the four dessert caterers are determined to keep their heads down and ride out the night—at least until Jake and Ellie see a figure fall over the side of the cliff that gives the place its name.

The body seems lost to the storm-tossed waves crashing on the rocks below, but as more bodies keep piling up and strange figures appear and disappear at the manor, Jake and Ellie must keep their wits about them in order to escape this horrifying place with their loved ones. How much peril will they be able to endure, and how many death-defying feats will they enact in their quest for safety? And will they be able to get to the bottom of all the murders in the process?

This was another action-packed installment of the series, filled to the brim with danger and mayhem. Jake is definitely a “move first, think later” kind of heroine as she escapes more perils than the fabled Pauline. Series fans will love this puzzling tale of adventure as Jake braves the haunted house again and again in order to save the people she loves.

There was one recipe included in this book, and it was brilliant.

Start with a 12-inch plain pizza crust. You can make your own, with these ingredients: 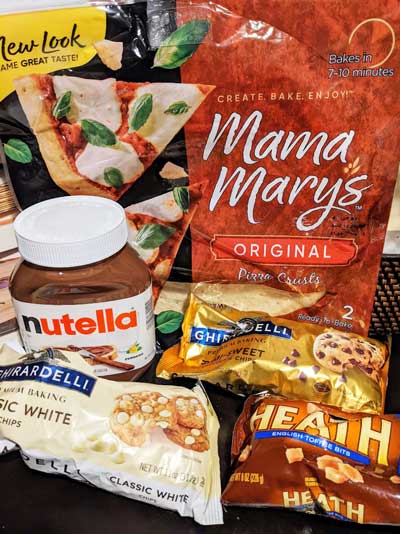 Dissolve the yeast in the warm water. Mix together the flour, sugar, and salt. Add the dissolved yeast and warm water. Add the olive oil. Mix it all together until it forms a dough. Dump the dough out onto a floured surface. Knead until the dough is soft, adding more flour to the kneading surface if needed.

Put the dough in an olive-oiled bowl and let it rise in a warm place until it doubles in size–45 minutes or so.

Then punch it down in the bowl, cover, and refrigerate. When it’s time to use it, punch it down again and turn it out onto a 16-inch square piece of parchment paper. Let it rest for 10 minutes and then use a rolling pin to roll it out into a 12-inch circle.

Slide the crust, paper and all, onto a pizza stone (or a cookie sheet). Bake for about 20 minutes in a preheated 450 degree oven. The time is approximate, though–you want it browned, not burned, so check it starting at about 15 minutes.

Cool the baked crust until it is just warm, then spread with chocolate-hazelnut spread. Top with bits of white, dark, and milk chocolate plus chopped nuts if you like them (salted nuts are great on this!).

Slide the pizza back into the oven until the chocolate bits melt slightly, remove from the oven, cut into slices, and enjoy! 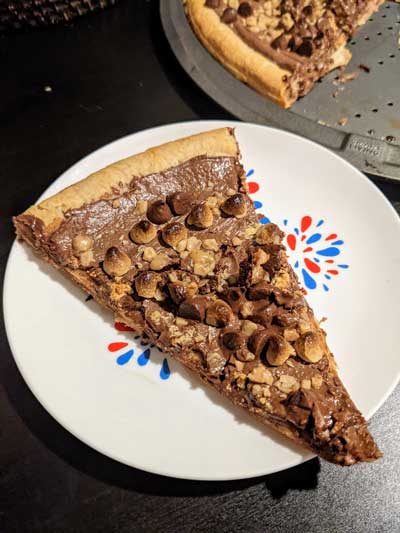 Honestly, I’m rather surprised the book wasn’t named for this dish, given its prominence in the proceedings. It’s also super delicious and super easy to make, especially if you’re lazy like I am and decide to just buy a pizza crust from the store. Since I’m not a fan of nuts but did feel like a little texture wouldn’t be amiss on this, I decided to sprinkle on some leftover Heath Bar English Toffee baking bits I had, along with the white and semi-sweet chocolate chips. It proved to be an excellent choice, providing the perfect hit of crunchiness and salt without being as tough as nuts might have been. Leftovers keep quite nicely too. Overall, I was impressed with how quick and easy this was to whip up and am thinking of teaching my 11-year-old how to make this on his own as a snack for himself and his younger brothers.

Next week, we travel cross country for even more paranormal culinary hijinks as we seek to foil a killer who will do anything to stop a wedding from happening. Do join me!