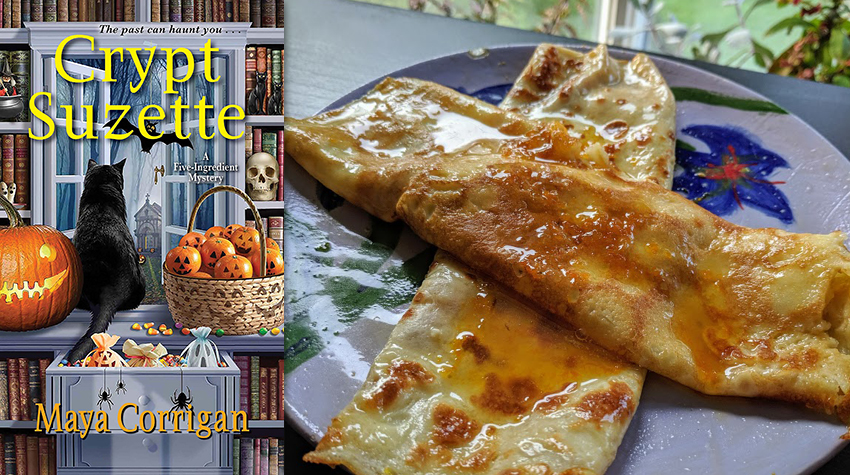 The Maryland town of Bayport’s newest bookstore is having an invigorating effect on every member of Val Deniston’s household. She herself is excited to be catering the bookstore’s Halloween event, while her housemate grandfather is exploring his tender feelings for bookstore owner, Dorothy Muir. Meanwhile, Granddad’s lodger, Suzette Cripps, is working hard on her entry for the bookstore’s costume contest. As a student working her way through college, the bookstore’s gift voucher grand prize would mean a lot to her, so it’s a pretty big deal when she wins.

Their good spirits are cut short, alas, when Suzette is killed in a seeming hit-and-run accident while out jogging the morning after. Val and her granddad have barely even started grieving before Suzette’s complicated family life rears its ugly, intrusive head. Suzette had been a private person, reluctant to talk about her past. So it comes as a shock to Val and her granddad when they find that Suzette had a very tangled personal life made uncommonly difficult by her penchant for standing up to bullies.

And then, the head of Suzette’s writing group contacts Val with suspicions of her own regarding what happened. Having heard of Val’s reputation in bringing murderers to justice, Gillian Holroyd wants her to sit in on the group’s first meeting since Suzette’s death, as Gillian is convinced that Suzette may have been in the middle of writing her own demise. Worse, she believes that one of the other writing group members might be a killer, and she wants Val’s help in bringing that person to justice.

This was an intricately plotted murder mystery with all sorts of interesting twists that made the matter of Suzette’s death a real whodunit. Suzette’s complicated life opened the door to all manner of criminal suspects, and I truly felt sorry that a person as well-intentioned as she had her life cut short far too soon. I also sympathized with Val’s romantic plight, even if I’m still a bit iffy on the guy she starts dating in this novel. How that romance develops is definitely something to look forward to in future books!

Included in this one, however, were five recipes, and I chose to try these two together, for obvious reasons: 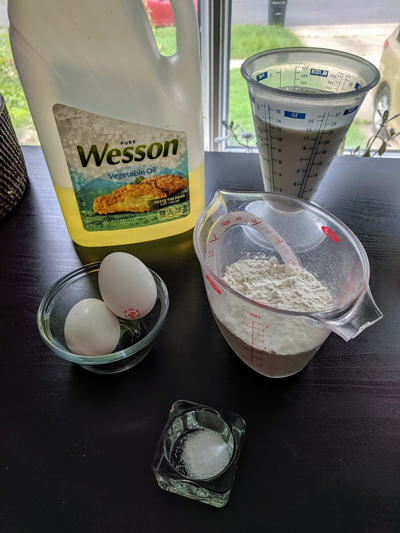 1 teaspoon oil for the pan plus additional oil as needed

Whisk the eggs, milk, and salt until well mixed. Slowly whisk in the flour.

Note: You can cook the crepes immediately, but refrigerating the batter for 20 minutes will smooth out any lumps or bubbles. Letting the batter rest makes it less likely the crepe will tear in the pan. The batter can keep for a day or two.

Heat a 10-inch skillet or crepe pan at a medium setting. To keep crepes from sticking, do not put the oil or batter in until a few drops of water sizzle in the pan and disappear in 2 seconds.

Add enough oil to cover the bottom of the heated pan. Pour a scant ¼ cup of batter into the pan and tilt it so the batter spreads into a thin circle coating the bottom. Cook at medium heat until the edges turn light brown and the center of the crepe has hardened past a liquid stage. Gently loosen the crepe with a spatula and flip it. Cook for another minute and transfer it to a large plate or platter, where the crepe can lie flat.

Repeat the preceding step, stacking the cooked crepes on the plate, until the batter is gone. Add a small amount of additional oil after every other crepe to keep the batter from sticking.

Melt the butter in a large skillet over medium heat until it foams. Stir in the sugar, orange juice, and liqueur. Simmer on low heat until the sauce thickens a little and looks syrupy. Remove the skillet from the heat.

With tongs, add a crepe to the pan, coat both sides in the syrup, and fold it into quarters or roll it into a flattened cylinder. Put it on a warm plate.

Repeat the previous step for each crepe.

Serve crepes as is or with ice cream for dessert. 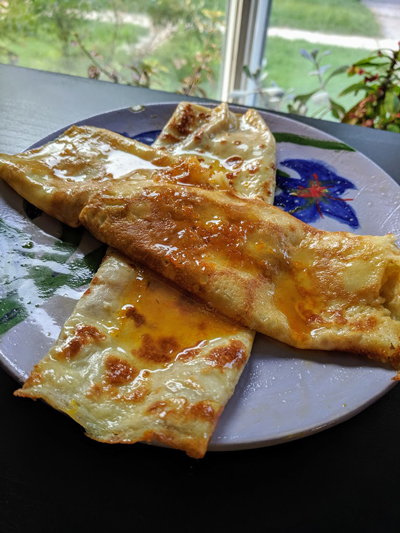 I love making crepes, even if I’m not very good at it, as you can tell from the pictures. I always feel like I’m either making them too thick or too big, as I always fall short of the number the recipes assure me I’ll produce. In this instance, I managed eight crepes, but oh, were they delicious! And that orange sauce is a true delight! I had some left over (unsurprisingly, given that it’s meant to coat 10-12 crepes) and stored it to have with bread later on as a sort of buttery marmalade.

Next week, we head south to make a Cajun culinary delight while reading about backstage shenanigans that culminate in murder. Do join me!