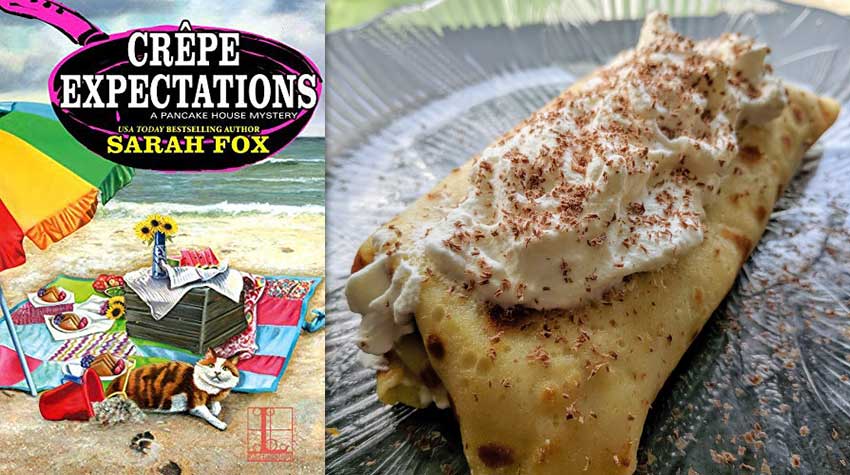 In this fifth book of the Pancake House mystery series, our heroine, Marley McKinney, is fully enjoying the life she’s building on Washington State’s Olympic Peninsula. Her pancake house, The Flip Side, is thriving, and her domestic life is going even better than expected since her landscaper boyfriend, Brett, moved in. Her cat and his dog are also getting along well in their blended fur family.

When the two animal lovers see a stray kitten darting off into the woods behind the inn where Brett is working, they immediately set out to find and rescue the ball of fluff. What they don’t expect to find is a human skull unearthed by recent flooding from a shallow grave in the woods.

Forensic investigation reveals that the skull belongs to Demetra Kozani, an 18-year-old who went missing around a decade ago. The graduating class of the local high school had thrown a party out in the woods the night Demetra disappeared. She had big plans to move to New York City to model once she was done with school, so everyone assumed she’d just taken off without further notice. But then her mom, who had moved to Arizona, started calling around to ask questions, and the inhabitants of Wildwood Cove realized that perhaps Demetra wasn’t safely on the road to stardom after all.

Ten years later, the question of where Demetra went is finally, tragically solved. Marley, who only moved to the area as an adult, finds herself immersed in the case regardless as the sheriff’s department starts questioning the townsfolk who knew Demetra in high school, including Brett’s sister, Chloe. Everyone knows that there was no love lost between the two and that Chloe and Demetra had had a very public argument at the party. Demetra had been the kind of hateful person who made more enemies than friends. As the official investigation progresses, more and more of Marley’s own friends get caught up in its web.

In addition to the cold case, Marley is also involved in Wildwood Cove’s amateur chef competition, which is starting to look like the victim of sabotage when people fall ill while taking part. Add to this the appearance of a stranger who looks shockingly similar to Marley’s dad—who died before she was born—and Marley is having one heck of a springtime.

I quite enjoyed the twisty layers of mystery that kept the reader guessing throughout, but my favorite part of this book was probably Marley’s relationship with Brett. It’s so refreshing to read of a culinary cozy heroine whose boyfriend backs her up 100 percent. It helps that Marley doesn’t go rushing headlong into danger while doing her sleuthing, but I did very much appreciate the lack of manufactured drama between the two.

Three delicious breakfast food recipes were included, and I decided to try one of my favorite flavor combinations in crêpe form: 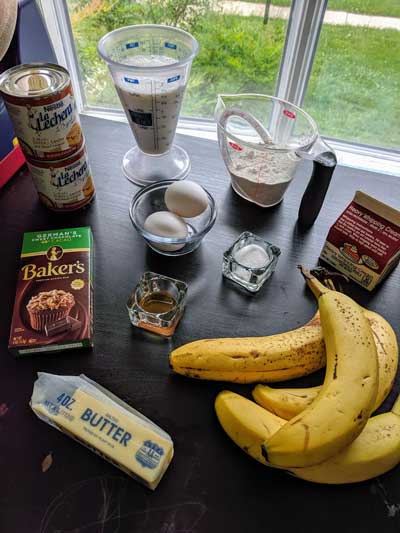 Butter or oil for greasing pan

Optional: Refrigerate batter for up to 6 hours.

Heat crêpe pan or small skillet over low heat for several minutes. Grease lightly. Increase to medium heat and leave for 1 to 2 minutes. Pour ¼ cup batter into the pan. Tilt and swirl to coat the pan. Cook until lightly browned. Remove from pan; repeat process. Makes 12 to 16 crêpes.

Spread some dulce de leche on each crêpe and add several banana slices. Fold the crêpe and top with whipped cream and chocolate shavings. 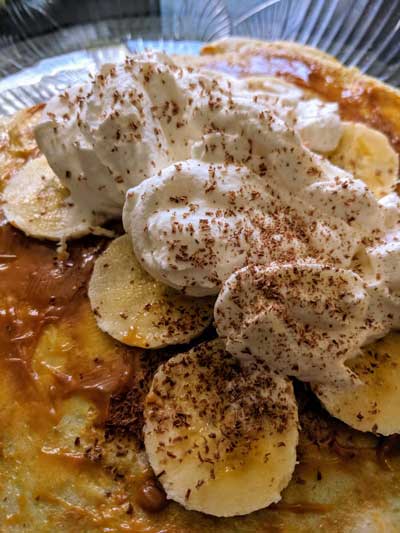 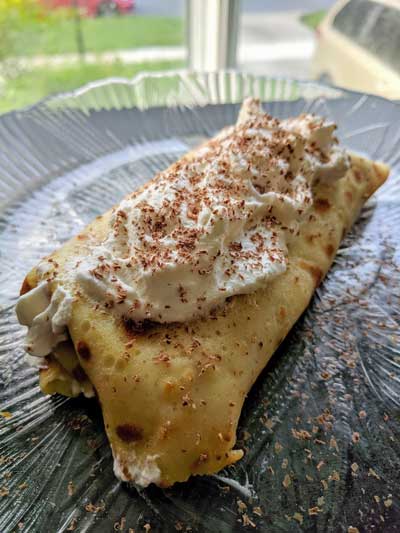 I’d never made crêpes before, so I don’t know if I got the thinness exactly right, but I think I did a pretty good job. The crêpes themselves were very tasty even before adding the filling. I must say that I didn’t use even an entire tin of the dulce de leche, but I also wound up making only nine crêpes total from the recipe provided above. I did find that it helps to spread the dulce de leche as far over each crêpe as you can and be generous with the bananas and chocolate shavings. I used a German chocolate bar for that last and made my own whipped cream, as is my wont.

This is a truly delightful breakfast recipe that feels like a decadent dessert, and it’s one I’m looking forward to making again—especially since I still have that other tin of dulce de leche waiting in my pantry!

Next week, we increase our altitude and make a yummy tea time treat to go with our mystery-solving. Do join me!