Cooking the Books: The Chocolate Shark Shenanigans by JoAnna Carl 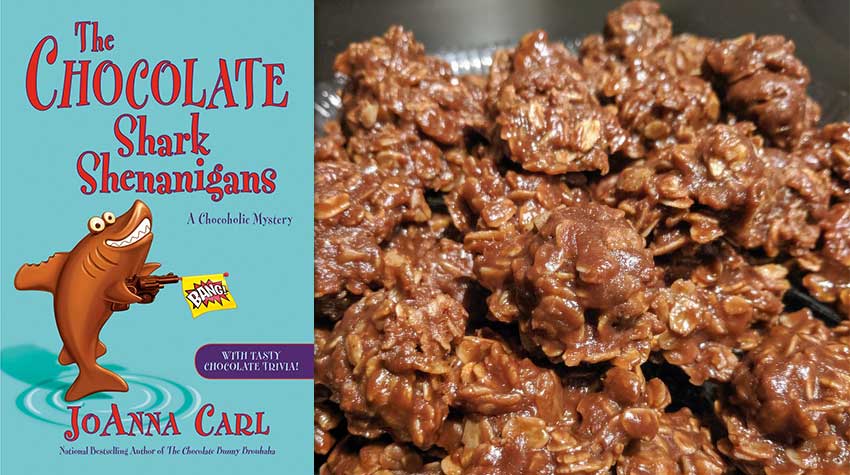 The 17th Chocoholic Mystery finds our series heroine, Lee Woodyard, feeling extremely grumpy. When the Bailey house near where she lives with her husband, Joe, goes up for sale, she’s happy enough to cheerlead his plans to purchase the house with her uncle by marriage, Police Chief Hogan Jones, with the intent of flipping it for future resale. Not a bad investment for their rapidly appreciating neighborhood—until Lee finds out that Joe plans to mortgage their own home in order to afford it. Being in debt has never sat well with accountant Lee, so she’s not in the best mood when she brings the plumber Joe and Hogan hired, the gossipy Digger Brown, on an inspection of the premises.

Lee has even more reason for concern after Digger finds a dirty bundle of rags behind a pipe in the Baileys’ basement. When he accidentally drops it, a gunshot rings out, barely missing her. Soon, Lee is on a quest to figure out who owned the gun and why it was hidden there. At first, she thinks this will be an easy case of making a few phone calls—she’s had a little bit of experience solving crimes in Warner Pier, Michigan, after all—but when a man is subsequently found beaten to death in the Baileys’ carport, things take a decided turn for the complicated.

The dead man is Richard “Spud” Dirk, a local real estate developer who had a very public argument with Joe over the Bailey property. Seemingly, the deceased Mr. Bailey had an informal agreement to allow Spud first crack at the sale, so Spud was spitting mad that the Bailey children were uninterested in honoring that pledge. When his body turns up on the very property everyone in town knows he was fighting over, suspicion quickly falls on Joe.

While Lee is fairly certain that no one in their right mind would think her husband a killer, she knows it would probably still help to present the state police with the identity of the actual murderer. As she digs, she discovers that Spud was once a member of an infamous group of cool, young teenagers who called themselves The Sharks and that a prank gone out of hand decades ago could be the reason for his homicide today. It could also place her and Joe in the crosshairs of a killer who will do anything to hide a truth long thought buried.

This was a fun installment in the long-running series that will absolutely delight fans and may pick up a few new ones along the way. It’s just the right blend of cozy and danger, with tons of delightful chocolate-related moments embedded in the narrative. I was actually quite a fan of the little vignettes on chocolate that end several of the chapters, one of which included the following recipe: 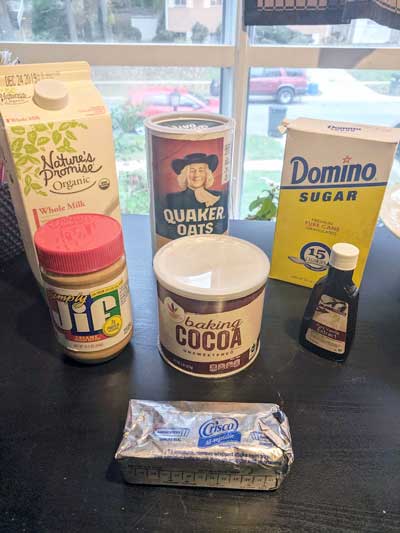 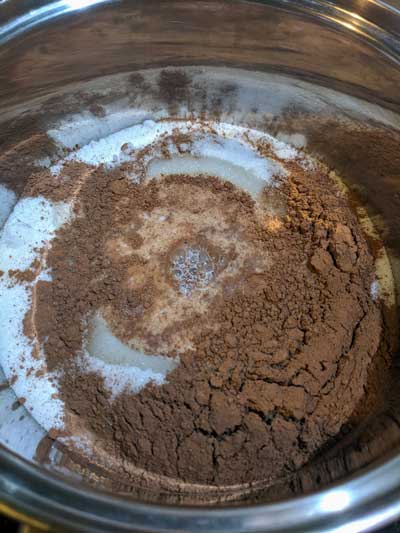 Add margarine, bring to a boil, and cook for one minute. 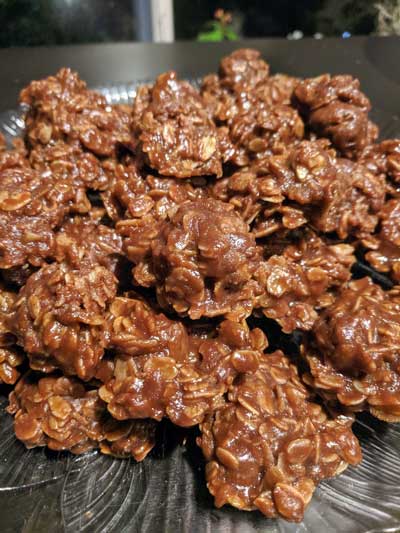 In all my years of cooking these books, I have never found a cookie recipe easier to make than this one! I did have a similar recipe once for “Icebox Cookies” that I found took forever to cool, even in the fridge; this recipe eliminates that problem by having you drop the cookies in order to cool them instead of trying to cool an entire uncut pan. So smart and, honestly, so delicious!

Ordinarily, I’m not the biggest fan of peanut butter or oatmeal cookies, but the combination together with chocolate here makes for a really delicious treat. One cooking note: I substituted shortening and a little bit of water for margarine and it came out wonderfully.

Next week, we head southeast to make a family-style side dish while trying to clear another beloved relative’s name of murder. Do join me!

See also: Cooking the Books: Three Widows and a Corpse by Debra Sennefelder