It seems like the entire town of Lake Eden is doing its best to help make the inaugural Walleye Fishing Tournament a success. Hosted by sporting goods mogul and Minnesota legend Wally Wallace, the tournament is bringing a lot of traffic into the area—and filling up the Lake Eden Inn in the process. When the inn’s pastry chef has a family emergency, owner Sally Laughlin comes looking for everyone’s favorite amateur sleuth and, more importantly in this case, cookie bakery owner Hannah Swensen to help fill in on her now shorthanded staff.

After Hannah’s business partner assures her that they can afford to spare her, Hannah agrees to help the inn on the condition that her younger sister Andrea can come too. Andrea has really started to come along in her baking, and Hannah wants to continue to help her confidence grow. Plus, staying at the inn gives them the chance to go out on the adjacent Eden Lake when they’re not cooking or serving food, which is only one of the bonuses, they discover, of hotel living.

Hannah is actually out on the water with her (not-but-really-should-be-)boyfriend, Norman Rhodes when they see another boat making strange circles in the water near where they were planning to do some fishing. Drawing closer, they’re shocked to discover the body of tournament host Sonny Bowman slumped over the wheel, shot in the back of the head.

Police Detective Mike Kingston decides to keep the murder under wraps so he can get a better feel for who might have wanted to do in Sonny and why. The handsome host came off as charming and knowledgeable on TV, but in actuality left most of the heavy lifting to his co-host, Joey. Worse, he had both a drinking and a womanizing problem, which definitely strained his relationship with his fiancee, Wally’s daughter Lily.

Even with her inveterate nosiness, Hannah doesn’t feel particularly motivated to look into Sonny’s murder—until Mike drops a bombshell on her that might change their lives in Lake Eden forever.

This was not my favorite of the Hannah Swensen Mystery series, though I did very much enjoy spending time with this beloved cast of characters. I thought the mystery was going to go in an entirely different direction based on a conversation early on in the book, so I was pretty surprised when the killer’s identity was actually revealed. I’m also not sure how I feel about Mike’s change of heart. While I love that he’s become a good, platonic friend to Hannah, I’m worried that this latest revelation feels completely out of character for him. Hopefully, things work themselves out in the next book, which I will definitely be reading too!

There were over 20 recipes included here, and I really, really wanted to try out this one: 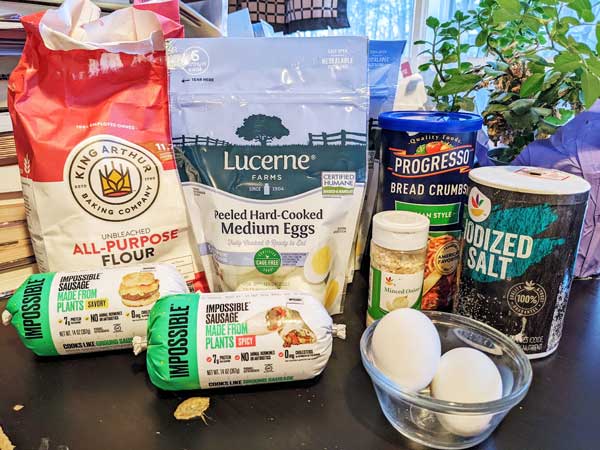 1 teaspoon dried, minced onion (you can find this in the spice aisle)

1 fresh egg, beaten (just crack it into a glass and beat it up with a fork)

When you’re ready to back, preheat oven to 400 degrees F., rack in the middle position.

While your oven is preheating, prepare your baking sheet by lining a cookie sheet or jelly roll pan with parchment paper.

Take your hard-boiled eggs out of the refrigerator.

Peel the eggs, making sure no shell remains.

In a large bowl, mix the 10 ounces of pork sausage with the teaspoon of dried, minced onions. 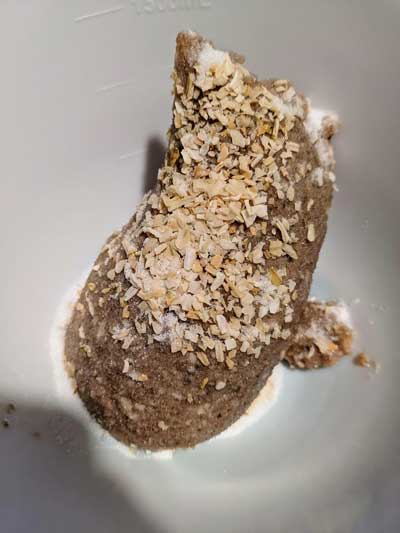 Sprinkle on a teaspoon of salt and mix everything up together. 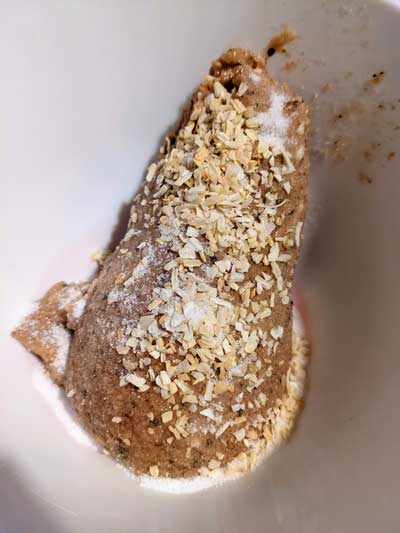 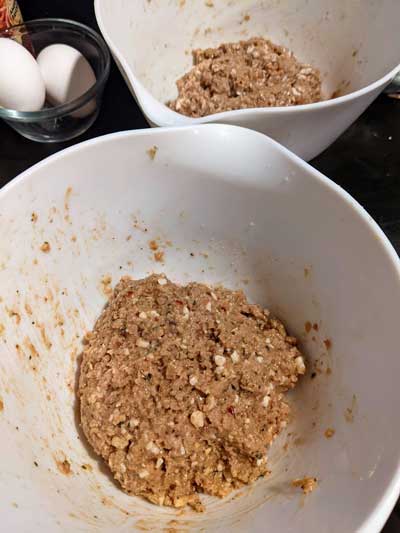 Make each portion into a flat patty.

Place ¼ cup of all-purpose flour in a flat bowl. Spread out the flour in the bowl.

Roll each peeled, hard-boiled egg in flour to coat it. 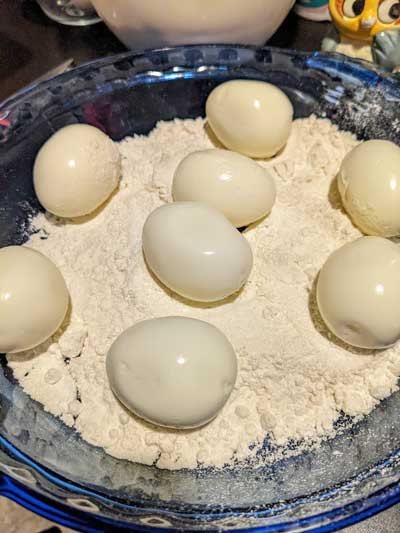 Place one floured egg on one of the sausage patties.

Shape the sausage around the egg, covering the egg completely. 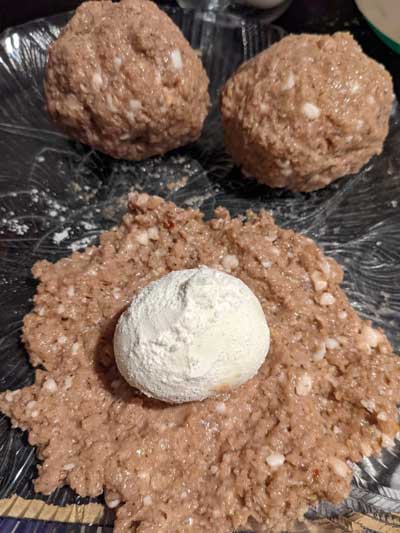 Repeat for the other eggs until all of them are coated with sausage.

If you haven’t done so already, crack the fresh egg into a bowl and whip it up with a fork.

If there is flour left over in the flat bowl, dump it out and replace it with Progresso Italian Style Bread Crumbs.

Dip each sausage-coated egg into the beaten egg mixture, coating the outside with beaten egg.

Quickly roll the resulting creation in the breadcrumbs, making sure it is coated completely. 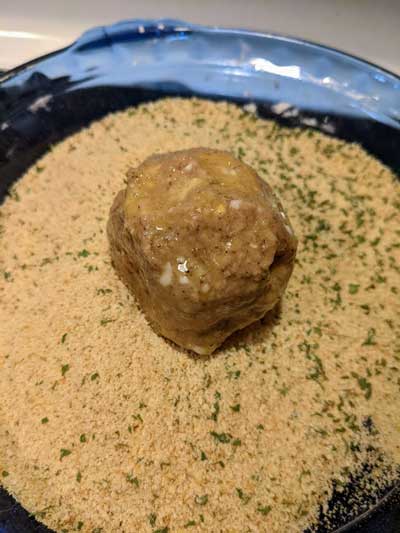 Place the finished hard-boiled egg on the parchment-lined baking sheet. Repeat with the other eggs, leaving an inch or two between the eggs. 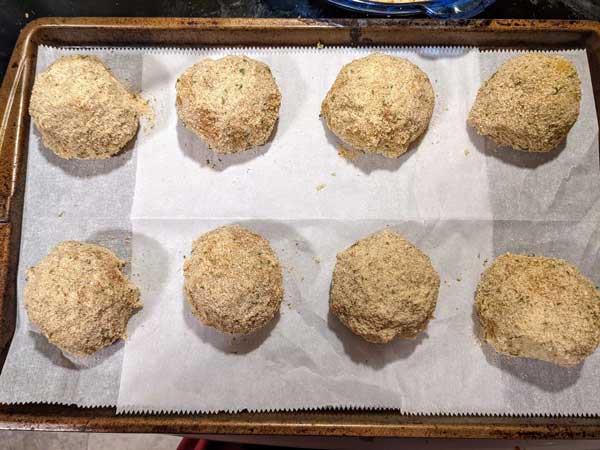 Bake your eggs at 400 degrees F. for 35 to 40 minutes or until the sausage has been cooked. 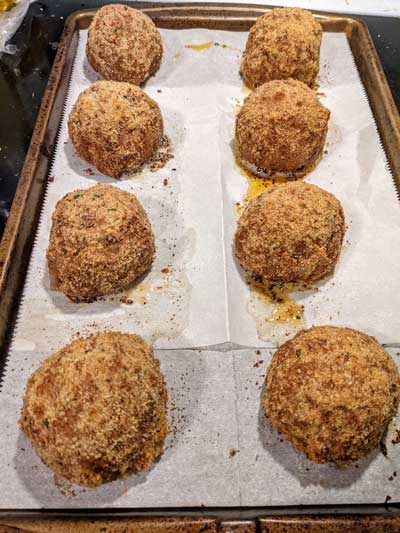 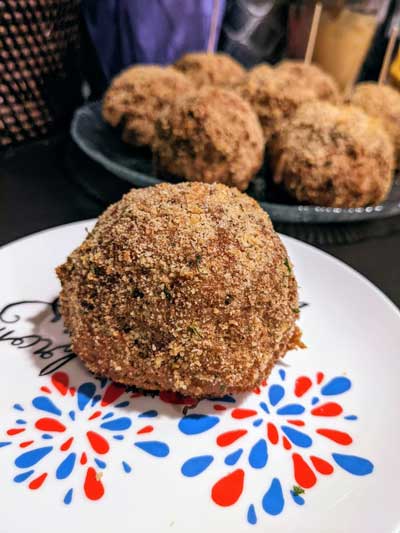 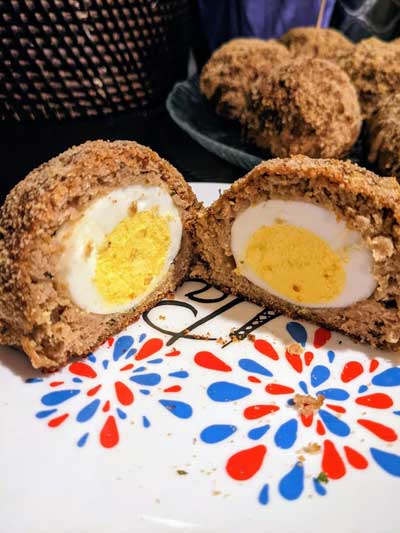 Instead of pork sausage, I decided to use Impossible meat, which was a great substitution in this recipe! I made both spicy and savory versions of these, and while both were delicious, I did finish the spicy ones much more quickly than the savory. The individual Scotch eggs were also quite large and could easily make an entire meal with starch and/or vegetable sides.

I would make two recommendations, however, with this recipe. First, assuming your sausage is already seasoned and ready for cooking from the chub, I would be a little more conservative with the amount of salt added here. Second, I highly recommend just buying hard-boiled eggs from the store if your local grocery has them, as they’re such a time-saver. Plus, the eggs always come out far more perfectly than from my own boiling at home.

Next week, I stick with the savory treats for another column in order to bake up a delicious quiche while investigating a murder with one of my favorite multi-talented sleuths. Do join me!