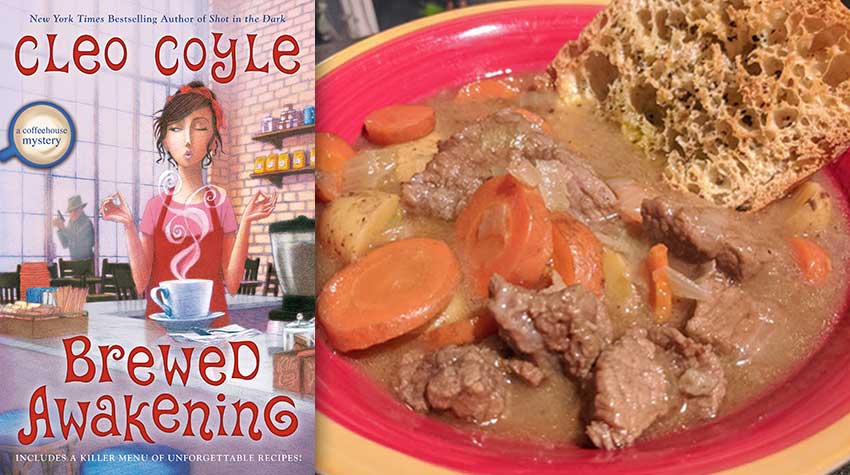 Clare Cosi wakes up on a New York City park bench one morning believing that she’s still a recently divorced single mom angry at her cheating ex-husband, Matt, for leaving her to raise their 11-year-old daughter virtually alone as she struggles to put food on the table. Instinct leads her back to the Village Blend, the cafe her beloved mother-in-law, Madame, helmed, where she’s surprised at the overjoyed reactions her appearance receives from two perfect strangers. They’re quick to apprise her that they are, in fact, her employees and virtual family, that it’s 15 years in her future, and that she’s been missing for days. Worse still, she disappeared while in the company of heiress Annette Brewster, whose abduction at gunpoint while Clare looked on was captured on security footage.

This would be a lot for anybody to digest, and not even the appearance of a visibly older Madame can persuade her entirely of Esther and Dante’s claims. Clare is further confused by the presence of overly solicitous cops and the arrival of a famous psychiatrist who insists on treating her pro bono due to his ties with local law enforcement. At least on that last, she’s not the only one feeling consternation.

When Dr. Dominic Lorca insists that the best treatment for her is prolonged isolation from her friends and family all the way in Upstate New York, Madame orchestrates Clare’s daring escape from the hospital. This endeavor sees Matt at his shady best, even if an amnesiac Clare can’t remember that they’ve buried the hatchet and nearly ruins everything by refusing to accept his help.

Of course, Madame doesn’t want to involve Clare’s fiancé, New York Police Detective Mike Quinn, until the deed is done and she’s certain he’s on board. Mike has to toe the delicate line between protecting his fiancée and ensuring that justice is served as he dodges his own co-workers, who are looking into both Clare’s case and Annette’s. Things take a turn for the worse, however, when Clare’s escape causes police suspicion to fall on her as being more than just an innocent bystander in Annette’s kidnapping.

This was another really fun installment in this wildly entertaining series. While amnesia is a curse I’d wish on no one, it was absolutely intriguing to read of Clare’s struggles to reconcile what her brain remembered with the reality of life around her. Processing the end of her animosity with her ex, as well as her alleged closeness with a man she doesn’t even recognize, made for compelling, thought-provoking reading.

I also greatly enjoyed the skullduggery throughout, as Madame and Matt whisk her to safety only to have her plunge back into trouble as she and Mike try to recover both her memories and Annette. The mystery is clever, as always, and the book ends with a delightfully large recipe section that includes instructions for nearly all the dishes mentioned earlier in the novel. Of the 17 recipes included, I decided to try the one below: 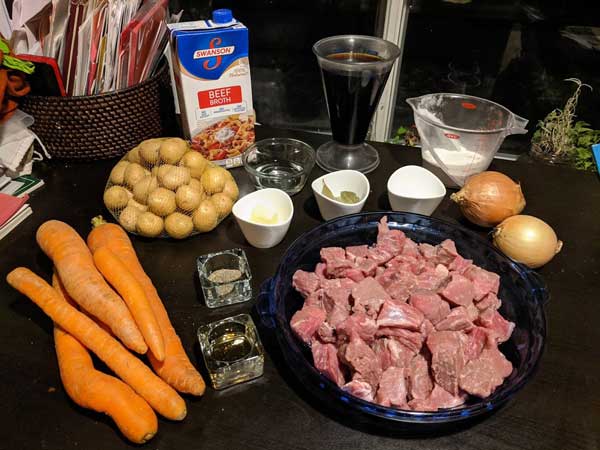 In a shallow container, whisk together 1 ½ cups of the coffee with 1 teaspoon of the coarse salt. Add the cubed beef. Toss to coat. Marinate at room temperature for one hour. When the beef is ready, remove the cubes from the marinade and discard the liquid.

First, season the flour with the ground black pepper, and remaining 1 teaspoon salt. Toss beef cubes in the seasoned flour to coat. Heat 2 tablespoons of the oil in a deep pot or Dutch oven. Saute the beef in batches, five minutes per batch, turning the beef cubes until they are browned on all sides. Add more oil between batches as needed.

Remove beef cubes from the pot but leave the juices. Add the vinegar and the remaining ½ cup of coffee to the pot. Cook over medium-high heat for 3 minutes. Return the beef cubes to the pot. Add the broth and the bay leaves. Bring to a boil, and then reduce immediately to a simmer. 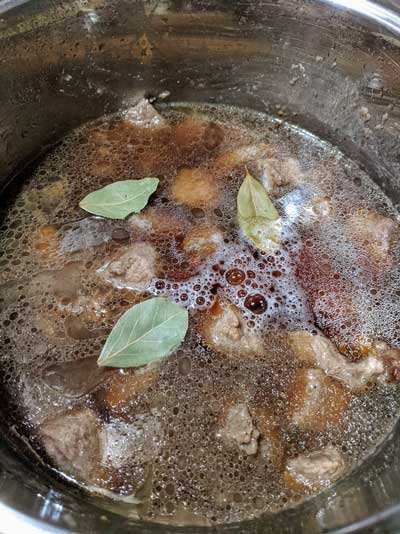 Serve stew hot with crusty bread or rolls or with flour or corn tortillas. As with many stews, this one tastes even better reheated the second and even the third day, with the flavors deepening and developing. 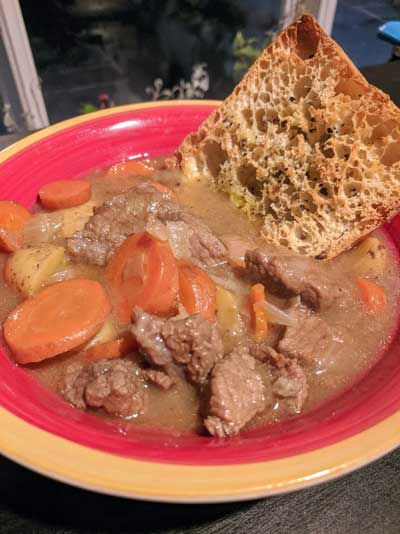 This is the best beef stew I’ve ever tasted, much less made! I was a little hesitant to try it at the beginning because the idea of marinating meat in coffee did not sound to me like the most appealing thing in the world. But coffee really does add earthiness and body to this dish. I used a French roast, which was perhaps not the most robust choice, but I figured it was better to err on the side of using coffee you enjoy on its own, sort of like when using wine in a dish. I served the stew with my go-to ciabatta rolls toasted with olive oil and salt and pepper for a complete meal. This is a really terrific recipe that I’m planning on making again and again.

Next week, we travel further south to a charming resort town to solve a murder while baking a healthy and delicious treat. Do join me!