Halloween is just around the corner in Fallingbrook, Wisconsin, and Emily Westhill’s donut shop, Deputy Donut, is working hard to create the perfect seasonal treats. Boston Scream Donuts seem like a natural fit, despite the good-natured protests of the local know-it-all and outspoken Bostonphile, Rich Royalson. When he hires Emily to cater donuts and coffee for his upcoming 70th birthday celebration, he also discovers that she and her new assistant, Nina Lapeer, have an eye for decor. He invites them to take a look at the cottage—a Cape Cod, naturally—that he rents out across the lake from where his house stands, in hopes of hiring them to redecorate the place. Emily and Nina, an artist, are definitely intrigued by this potentially lucrative side gig.

The job falls through, alas, with Rich’s abrupt demise. Emily stumbles over his cooling corpse when she arrives with her catered goods for his birthday bash, only to find that someone has done their best to stove in his head with a skillet she’d examined just the evening before at his rental place. Suspicion immediately falls on Terri Estable, the much younger lost love with whom he’d freshly reunited and, more incriminatingly, changed his will for. Terri, in turn, claims to be scared of her ex-boyfriend Derek, who did not take well to her leaving him for Rich. When Terri suddenly disappears, Emily will have to find out whether there’s a serial killer on the loose—and whether any of this has to do with the tragic death of Rich’s first wife over two decades ago.

In this, she’s aided by her connection to local law enforcement. Her business partner, Tom, is Fallingbrook’s retired police chief as well as the father of her late husband, Alec, who was killed in the line of duty six years ago. Since then, she’s slowly gotten closer to Alec’s best friend and former partner, Brent. They’re both extremely slow to pull the trigger on a romantic relationship, even though all their friends are starting to couple up. It’s interesting to read about how their friendship gradually changes with time.

The mystery was also fairly interesting, with a lot of exploratory kayaking on the lake where Rich owned his properties. Emily’s imagination as she investigates tends toward the detailed as she muses on the possible reasons various suspects might have had for wanting Rich dead. And as always there are the craving-inducing descriptions of donuts and other seasonal treats available from the donut shop, two recipes of which are included in this volume! I chose to try out this one:

These are baked, using a donut pan 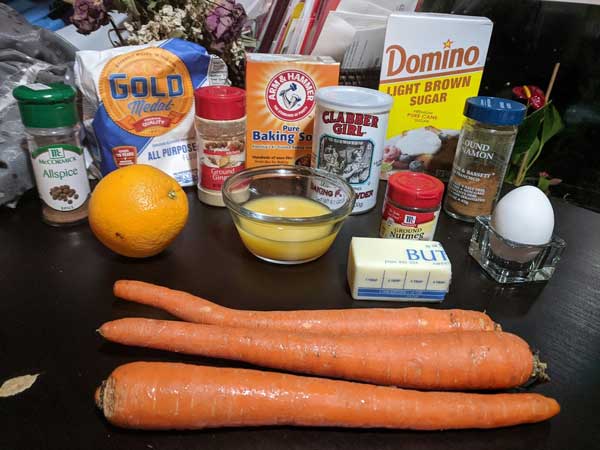 Beat the egg in a large bowl. Beat in the juice, butter, orange zest, and sugar.

Stir in the grated carrots.

Spoon the mixture into donut pan, filling each ring. 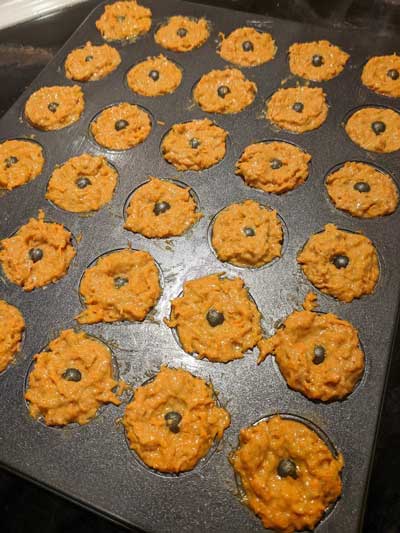 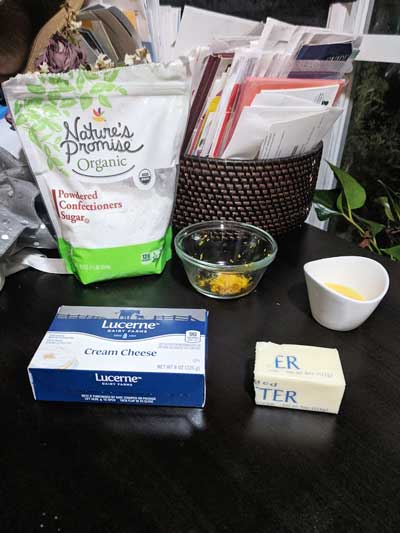 Up to 1 more tablespoon orange zest

Cream the butter and cream cheese together until fluffy.

Stir in the orange zest and orange juice.

Beat in 1 cup sugar. Beat in more sugar, a tablespoon at a time, until the frosting holds its shape.

Stir in the orange food coloring (optional) until desired shade is reached.

Spread the frosting on the donuts. 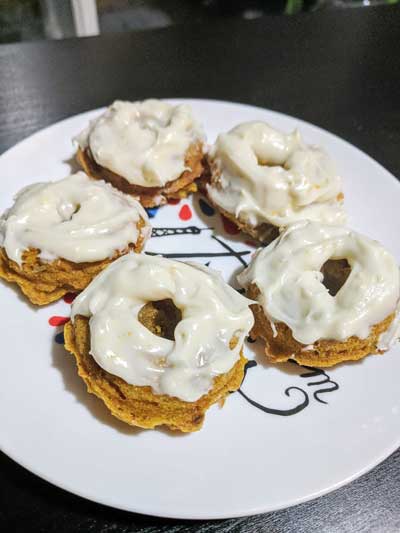 I actually decided to use my mini donut pan for these since I knew it would be mostly my kids eating the finished product and smaller sizes would better please everyone involved. Since my oven runs cool, I got away with baking the donuts for 11 minutes before they were ready to eat. I’m not sure if it was the smaller size that made the carrot bits especially prominent, but I did think I could have gotten away with using at least a quarter cup less of the grated carrots.

My kids didn’t seem to mind though, and it’s always a good day when they gobble up their vegetables without complaining! That said, I must remember to do a better job of sifting the powdered sugar next time, especially when the recipe writer makes a point of mentioning it. It takes so much longer to get a nice smooth frosting when I forget to sift first.

Next week, we come back to my home area to investigate another murder while baking up another healthy(ish) treat. Do join me!