Cooking the Books: Better Off Read by Nora Page

When the Catalpa Springs library suffers severe storm damage, septuagenarian librarian Cleo Watkins consoles herself with the thought that at least she can still distribute books to the residents of her Georgia town via the bus they’d recently converted to a bookmobile. Never mind that Mayor Jeb Day seems more eager to shut down the library altogether in favor of making Catalpa Springs the fishing capital of the universe (with a floating casino to boot!). He claims that he just can’t authorize spending the town’s limited funds on repairing the library, whereas investors will happily pay for a world-class fishing pier and amenities.

In her efforts to rally the townsfolk to the library’s cause, Cleo enlists the aid of rich, eccentric Buford Krandall, a fellow bibliophile with perhaps a disturbing penchant for true crime. Buford is mortal enemies with Cleo’s own best friend, Mary-Rose Garland, who owns the Pancake Mill just across the pond that separates their properties. His latest provocation has been to acquire a loud digger with plans to divert the spring that feeds the pond. He then plans to bottle and sell the water, a move that outrages both Mary-Rose and local environmental groups.

Cleo’s just relieved to have someone else in her corner, especially someone who promises to help raise the money the library needs. But when she and her friend Henry Lafayette come calling on Buford several days later, they’re shocked and dismayed to find him bludgeoned to death, surrounded by several library books. Suspicion quickly falls on Mary-Rose, whose feud with Buford was well known throughout town. Mary-Rose readily confesses to sabotaging Buford’s digger but insists she had nothing to do with the murder, a claim the local police department views with skepticism. Cleo fears that Mary-Rose might actually be covering for Cleo’s own grandson, Oliver, whose activism recently kicked into high gear with the arrival of an attractive young environmentalist from a national group.

Our experienced librarian has always had a penchant—not to mention the skillset—for getting to the bottom of things, and she certainly isn’t going to do any different here, not with her loved ones under suspicion of murder. But when her own life is threatened and another dead body is found, she’ll have to decide just how far she’s willing to go to unearth the truth behind who and what caused Buford’s untimely death.

This was a delightful start to the Bookmobile Mystery series, with a spry and smart heroine who brings a refreshing perspective to the genre. The characterization was so good that when one of the biggest mysteries was solved, I fervently hoped that that character was not actually the murderer. I was thoroughly delighted by the resolution, which leads in nicely to the second book in the series, Read On Arrival, which I reviewed around when it first came out.

Included with this mystery was a recipe for the cake that causes a bit of a to-do in the narrative. 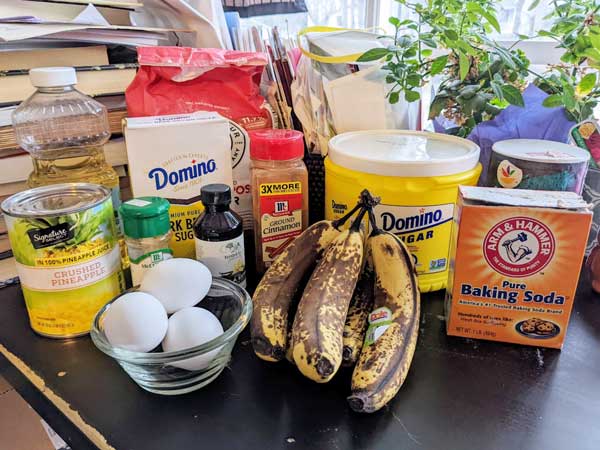 ¾ c. canola or other neutral oil

1 (8 oz.) can crushed pineapple and its juices

1 c. chopped pecans, toasted, with extra garnish (optional, whole or chopped, candied pecans if you like)

Preheat oven to 350°F. Coat two 9-inch round cake pans with cooking spray, and line the bottoms with parchment paper.

Whisk the flour, baking soda, spices, and salt together in a large bowl. 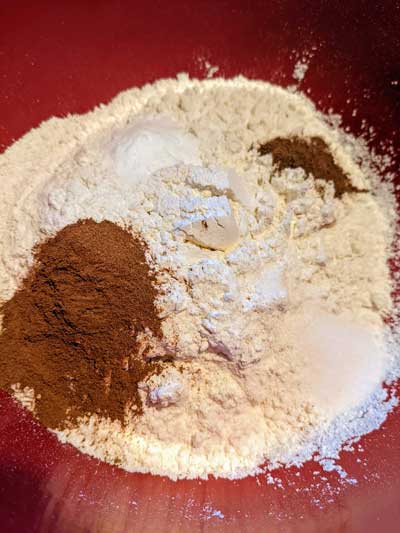 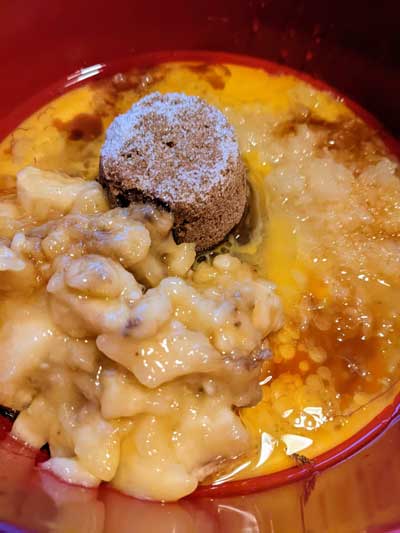 Pour wet ingredients into dry ingredients, and fold together until combined. Be careful not to overmix. 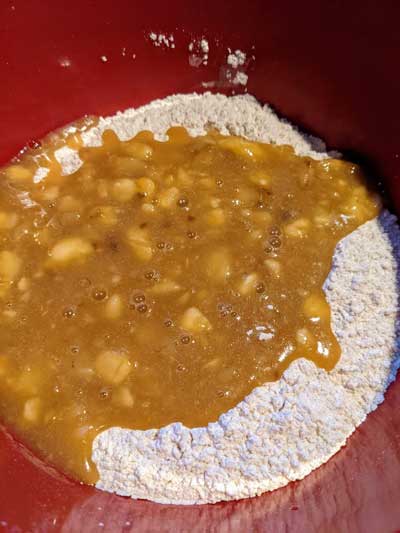 Gently fold in the toasted pecans (saving aside some for garnish, if desired).

Divide the batter between the pans.

Bake until the cakes pull away from the edges of the pan, and a tester comes out clean, 35 to 40 minutes. 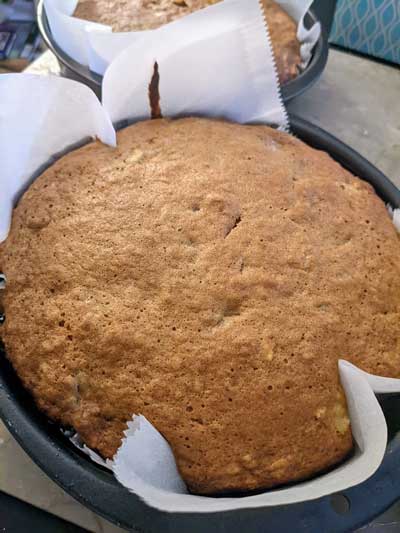 Cool cakes in their pans on a wire rack for about 10 minutes. Then flip the cakes out and let cool completely on the rack before frosting (see recipe below). 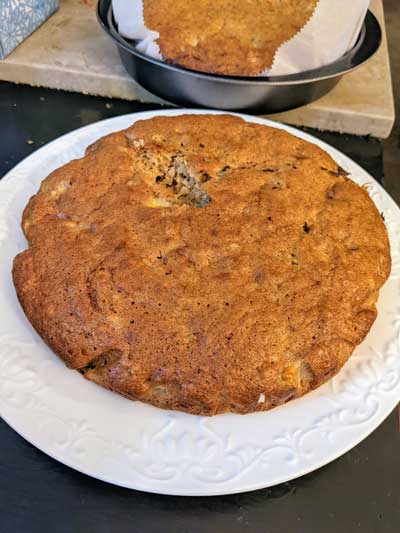 Frost the cake. Place one cake on a cake stand or plate. Spread on ⅓ of frosting. Top with the second cake. Top this cake with another ⅓ of the frosting, and spread evenly. Cover the entire cake with the rest of the frosting. Decorate with remaining pecans, if desired.

For easiest slicing, refrigerate the cake at least 30 minutes before cutting. Enjoy! 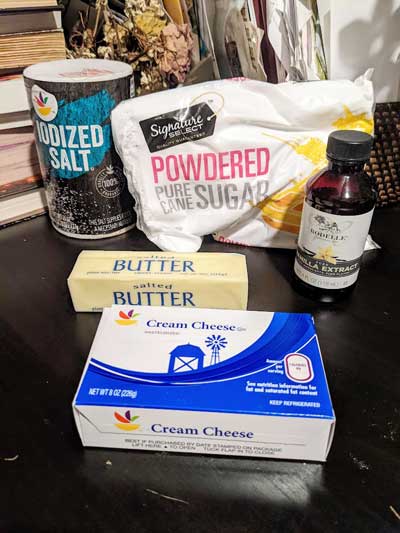 Place butter and cream cheese in a large bowl, and mix on medium speed until smooth and creamy, about 3 minutes.

Mix in vanilla and salt. Then gradually add the powdered sugar, until thick and spreadable.

*Note: This recipe makes a lot of icing. If you like your cake less sweet, you can halve the recipe and still have enough for the upper and middle icing layers. 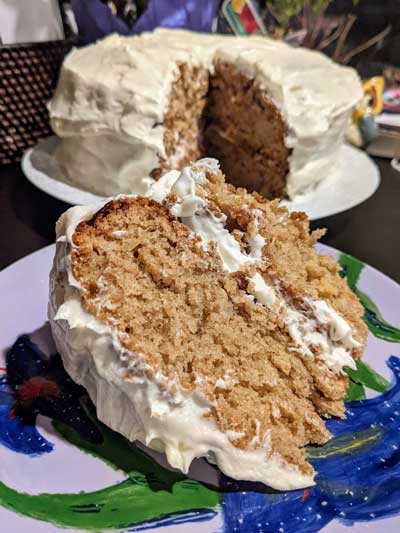 I’m still not sure whether or not I should have skipped the pecans in this, though the nut-free version I made was very delicious indeed. I did only whip up half of the icing, as noted, which I think covered the cake quite nicely without overloading anyone who had a slice with sugary sweetness. My eldest child, who rarely likes anything I make, gave the icing his unsolicited but wholehearted seal of approval too.

Next week, we bake up another swoon-worthy treat while catching up with the latest in this series, investigating the death of a charming conman. Do join me!