Cooking the Books: It’s Beginning to Look a Lot Like Murder by Maria DiRico

Mia Carina is gearing up for a busy holiday season, both at the Belle View Banquet Manor she runs with her dad, Ravello—former mob guy gone straight—and at home with her paternal grandmother, Elisabetta, who is hellbent on winning the annual block decoration award. At work, at least, she has the help of a mostly excellent staff, including the ridiculously good-looking Shane Gambrazzo, a former male model who desperately wants to downplay his attractiveness but will reluctantly use it in service of their event planning activities. Mia is very attracted to Shane but knows that acting on her feelings would be wildly unprofessional, especially if he doesn’t reciprocate. But it’s another, albeit former, love interest who proves even more disruptive to her peace of mind in the lead up to Christmas.

Jamie Boldano is not only Mia’s ex-boyfriend but also the son of Donny Boldano Sr, the crime boss whose fortunes have always been deeply tied to the Carinas’. When Donny Sr and his wife, Aurora, invite Mia over for a private talk—with a warning not to say anything to Jamie—Mia fears the worst. Jamie is happily involved with the lovely-if-non-Italian Madison, with whom Mia has also struck up a firm friendship. The last thing Mia wants to do is get in the middle of her friends’ relationship.

Fortunately, what Jamie’s parents have to say has nothing to do with Madison. Unfortunately, what they tell Mia is an even bigger family bombshell. Turns out that a guy named Lorenzo Puglia has come around claiming to be Jamie’s long-lost brother. This is obviously a con, but it does bring up family issues that Jamie’s parents never thought they’d have to discuss with their younger son. The older Boldanos want Mia with them when they talk to Jamie about all this in hopes she can help mediate what’s sure to be a difficult conversation. Alas, things do not go as planned, leading to hysterics, fights, and then an unexpected murder, with the corpse ending up practically on Mia’s doorstep.

Now, Mia has to get to the bottom of things while dealing with demanding event clientele, difficult family members, and unhappy capital-F Family members. The surprise arrival of her estranged mother, Gia, only adds to the stress. Will Mia’s smarts and goodwill help see her through and, perhaps, help her find a little romance in the process?

The Catering Hall Mystery series keeps going from strength to strength as it follows the adventures of our thoroughly modern heroine. Mia’s narrative voice is refreshingly lively and believable as an Astoria girl navigating life in the 21st century. This book has everything I want from a cozy mystery: a satisfying fair-play puzzle, a romance I was rooting for, and loads of humor and charm.

It also included seven delicious recipes that I had a hard time deciding between! But since I had a bunch of shrimp left over from cooking last week’s column—and since I wanted a little vindication in my cooking skills after my so-so efforts last week—I decided to try yet another seafood pasta. 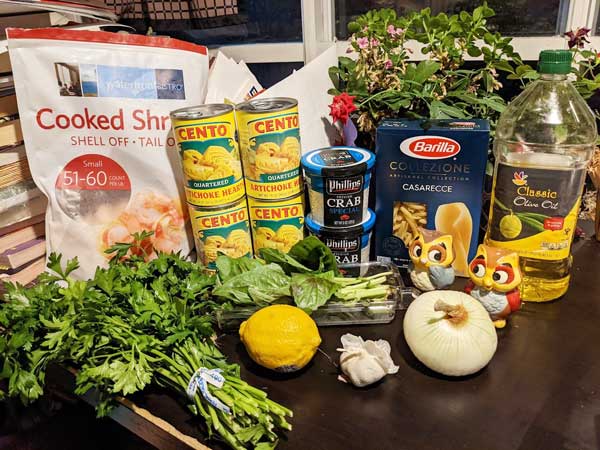 Dice shallot. Add the teaspoon of oil to a skillet or sauté pan and sauté the shallot until it is soft. Set aside to cool. 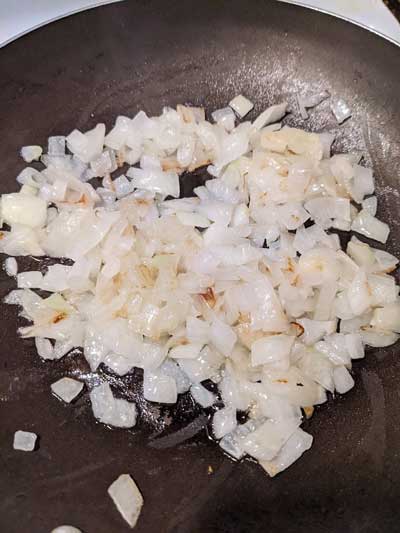 In a medium-sized bowl, gently mix the crab, shrimp, garlic, lemon juice, parsley, cooled shallot, and basil. In a smaller bowl, whisk the olive oil, artichoke liquid, and salt together. Pour the liquid into the shellfish mixture and gently stir to combine. Cover the bowl and refrigerate for at least an hour but preferably overnight.

When you’re ready to prepare the dish for dinner, remove the shellfish mixture from the refrigerator and bring to room temperature. Follow the directions that accompany your cavatelli or choice of pasta to cook it until it’s al dente. Drain the pasta and toss with the shellfish mixture. Serve immediately. You can put out salt, pepper, and lemon juice for any guest who wants to add a dash to their meal, but no cheese. Niente formaggio sul pesce, as the Italians say. No cheese on fish. 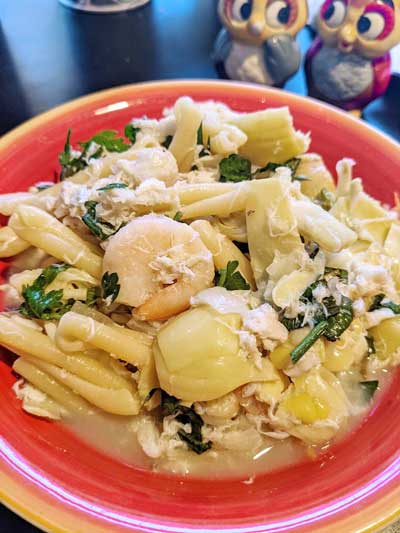 Oh wow, this is a bit like ceviche with pasta! While it’s good at room temperature, I actually really enjoyed it cold, as I felt like the acid bite of the lemon and artichoke really came through then to provide the perfect counterpoint to the yummy seafood and pasta. My husband couldn’t find shallots at the store, so we substituted a small sweet onion, and he picked out casarecce instead of cavatelli pasta. It all worked out quite nicely though!

I wasn’t sure what kind or volume amount of artichokes I should use, but since I like artichokes, I erred on the larger end of the standard can size, then roughly chopped the quartered artichoke hearts to more evenly distribute them throughout the dish. I also threw in a little extra chopped parsley, just to give it more healthy green goodness.

Next week, we take a break from seafood pasta to make a yummy, easy dessert while investigating who hated Santa enough to kill him. Do join me!