Cooking the Books: Batter Off Dead by Maddie Day

Country store and B&B owner Robbie Jordan is savoring newlywed life with Abe O’Neill, her husband of six weeks, despite the sultry summer weather. The heat is almost but not quite enough to mar their latest visit to Jupiter Park to watch the weekly fireworks display put on by their patriotic South Lick, Indiana, town. The weekly gathering is a nice way to catch up with friends in a festive atmosphere as well as to make new acquaintances, including Grant Bird, father of one of Robbie’s own friends, Lieutenant Buck Bird. The lieutenant is on duty performing crowd control for the municipal gathering but is happy to introduce Robbie to his elderly and now blind father as well as to Grant’s lady friend Vi Perkell, who’s been teaching Grant to knit.

Once darkness falls, the gathered townsfolk and visitors settle into their seats to watch or otherwise enjoy the spectacle. The fireworks certainly make for a stunning display, but their aftermath stuns in an entirely different and far worse way. Someone took the opportunity to stab poor Vi in the neck under cover of darkness, dazzling light, and explosion. Robbie is deeply saddened by this terrible occurrence but grows alarmed when she learns that this was also the same way in which Buck’s mother had been killed several decades earlier.

The murder of Yolande Bird remains unsolved, but no one thinks it was a coincidence that Grant’s latest love interest was killed in the same, unusual way. The only questions are who and why. Robbie finds herself unwittingly tangled up in the investigation by virtue of her reputation for providing assistance to both Lieutenant Bird and homicide Detective Oscar Thompson. Being the proprietor of one of the most popular restaurants in town means she gets a heads up on all the local gossip. Plus, her affection for the elderly finds her visiting Grant and several other residents of the various senior centers in the area. She can hardly say no when Grant himself asks her for help in solving the murders.

This 10th book was another solid entry in the Country Store Mystery series, though I don’t remember Robbie being quite so pushy with her inquiries in the previous books. The killer’s identity came as a surprise, though I thought the juxtaposition between the contemporary murder and the older one was nicely done. It was also nice to read about Robbie’s ongoing interactions with her employees and extended family as well as her renewed focus on volunteering.

There were six delicious recipes included, and I decided to take advantage of a (very short) Maryland warm spell to make this tasty soup. 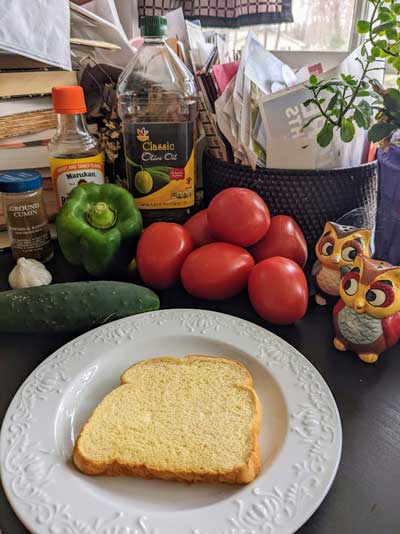 1 thick slice of good bread, soaked in water for three seconds, then wrung out

Combine all ingredients in a blender or food processor. Puree for 1 minute, or until the soup reaches desired consistency. Taste and season with extra salt, pepper, and/or cumin if needed. Refrigerate in a sealed container for 3 to 4 hours, or until completely chilled. 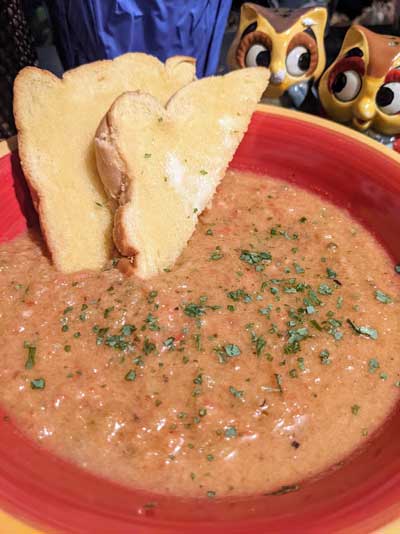 I didn’t actually core my tomato or cucumber–I just don’t believe in throwing away edible nutrients like that!–and that probably made my soup a little paler than it’s meant to be, but it was still incredibly tasty. The flavors were bright and summery, contrasting nicely on the tongue with the chilled temperature of the soup. It didn’t even need the addition of hot sauce, and I usually like to add hot sauce to everything!

Next week, we head back to the East Coast to make a delightful springtime appetizer while trying to figure out who would frame a cooking competition contestant for murder. Do join me!

See also: Cooking the Books: Death of a Knit Wit by Peggy Ehrhart