Cooking the Books: The Accidental Alchemist by Gigi Pandian 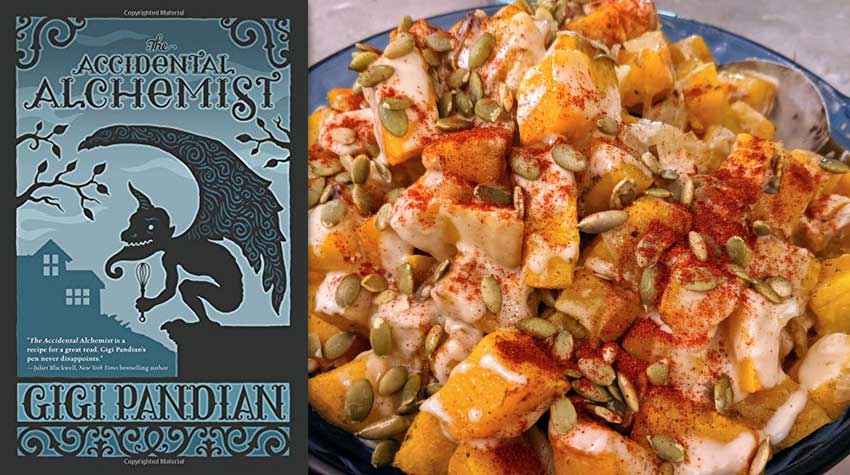 Earlier this year, I became smitten with the ongoing adventures of the French gargoyle Dorian Robert-Houdin and his roommate, Zoe Faust, via the terrific The Alchemist’s Illusion, the fourth book in the Accidental Alchemist series. I decided to come back when I had the chance and review the series from the beginning, so here we are!

The Accidental Alchemist of book and series title is the aforementioned Zoe, who fled the 17th-century witch trials of Salem, Massachusetts, for Europe with her beloved younger brother Thomas. Zoe had always had an affinity for plants and herbs and used her skills to create simple remedies in order to help support them in their new home. Her talents were noted by none other than the famed alchemists Nicholas and Perenelle Flamel themselves, who fostered the siblings until tragedy struck.

A grieving Zoe, unaware that she’d achieved immortality, left her adoptive family in order to wander Europe alone. For most of the time since then, she’s accustomed herself to a peripatetic life, doing her best to keep a low profile while generally eschewing alchemy and avoiding attachments at all costs.

But that changes when Zoe discovers 21st-century Portland, Oregon. Something about the city calls to her, and so she decides to settle there for at least a little while, purchasing a fixer-upper to renovate for her purposes. However, nothing goes as planned, as right from unpacking the crates shipped over from her last permanent residence in Paris, she finds a stowaway who desperately needs an alchemist’s help.

Living gargoyle Dorian asks her to translate an arcane text for him, but their initial conversation is interrupted by a local teenager who threatens to reveal Dorian to the world. Worse still, the handyman Zoe hires to help with renovations shows up dead on her doorstep the next morning, putting her under public scrutiny for the first time in decades. Zoe realizes that the fastest way to regain her anonymity is to clear her name, and her adventures in Portland as she does so make for truly entertaining reading.

If I’m being perfectly honest, I didn’t like this book as much as The Alchemist’s Illusion, primarily because the pacing seemed off at times as Gigi Pandian juggled the many layers of plot. It was a decent basis for the series to come, however, introducing our quirky and endearing cast of characters as they solve murder mysteries with roots in both the supernatural and in Portland’s fascinating history.

The Accidental Alchemist also included three vegan recipes. I decided to try this savory side dish since we’ve just done two sweets in a row for this column: 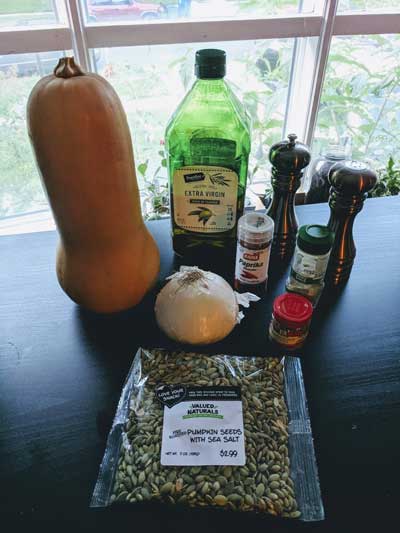 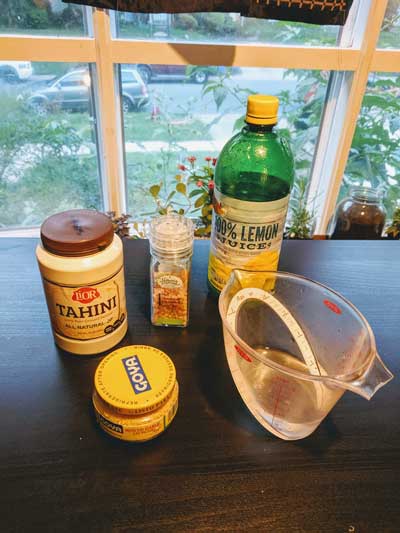 Preheat oven to 425. Peel butternut squash and cut into ½-inch cubes, discarding the seeds. Peel the onion and chop roughly. Toss squash and onion with olive oil, then spread out on a parchment-paper-lined baking sheet. Sprinkle spices on top. Bake for approximately 40 to 50 minutes, stirring once after 20 minutes. 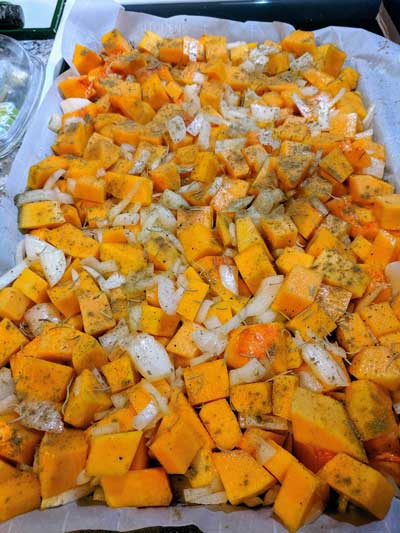 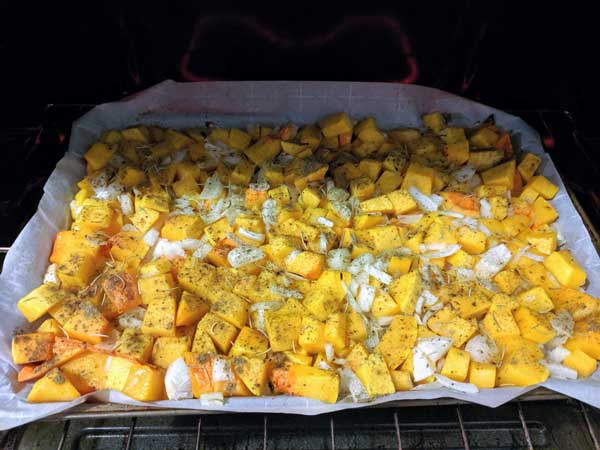 While the squash mixture is baking, prepare the sauce. Whisk all the sauce ingredients together, then taste to adjust for salt and spice levels. 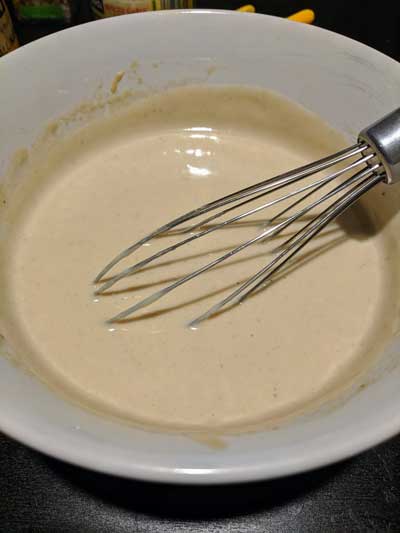 Optional touch for a tasty garnish: Toast ¼ cup raw pepitas in a dry skillet on medium heat for a few minutes, until they begin to pop.

To serve: Transfer squash mixture to a serving bowl, drizzle with tahini sauce, toss pepitas on top, and sprinkle with a dash of paprika. 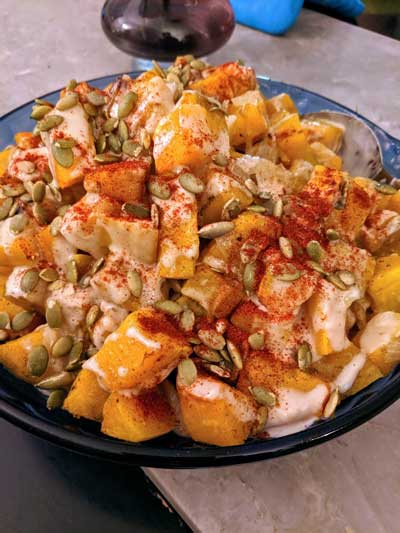 Oh, gosh, this is the best vegan food I’ve ever tasted! It was so good, I’ve already made it twice, and it was a hit both times. I even had a friend tell me not to tell people that it was vegan in order not to put them off from this truly delicious dish.

The tahini sauce is especially killer—don’t be afraid to add a little more lemon juice and salt to bring out those aspects of flavor. I actually wound up just pouring all the sauce over the squash and mixing it up before serving, instead of just applying a drizzle. The dish also keeps really nicely, with overnight refrigeration enhancing the flavors such that any leftovers are very quickly gobbled up. Oh, and if you’re not feeling up for cutting an entire squash—or if your grocery store runs out of pre-cut squash like mine did when I was shopping for the second go-round—frozen makes for a perfectly adequate substitute.

Next week, we’ll cook another vegan dish as we stick around in Portland to help Zoe and Dorian unravel more of his past even as another murderer strikes! Do join me!