Cooking the Books: 15 Minutes of Flame by Christin Brecher

Ordinarily, I like to group together holiday titles around their respective seasons instead of plunging ahead as soon as possible after each book’s publication date, but I simply could not resist diving straight into Christin Brecher’s latest Nantucket Candle Maker Mystery! Featuring the feisty, resourceful Stella Wright, 15 Minutes of Flame sees her helping a local girl scout troop prep a Nantucket home for Halloween hijinks only to stumble across a long-concealed body bricked up behind a stone wall.

The skeleton is dressed in a Quaker outfit, and local experts confirm that it’s most likely the body of a woman who was killed, probably violently, over a century ago. Stella digs into the archives of the local historical society and thinks she’s identified the murdered woman as Patience Cooper, a seamstress who was assaulted and robbed while delivering a large sum of money collected from other seamstresses as an investment in a whaling ship. She was said to have fled the island in shame with her husband after recovering, but the discovery of her skeleton would indicate otherwise.

This sensational story not only intrigues the island folk but also draws the attention of several outsiders. Forensic anthropologist Robert Solder and his assistant, Leigh Paik, are called in to properly authenticate and secure the remains, much to the chagrin of visiting historian Jameson Bellows, who feels that they’re horning in on his territory. Things get even tenser when a reality show producer named Hugh Fontbutter shows up wanting to do a series on the newly found skeleton and scandal. As this motley crew begins to dig around the island, the consternation of the locals grows. When one of the newcomers is found dead, Stella has to figure out who would kill to preserve secrets, and perhaps even a treasure, long thought buried.

15 Minutes of Flame was another of Ms. Brecher’s trademark twisty fair play mysteries that features smart, snappy dialog in addition to showcasing the rich history of Nantucket Island. I loved learning about the independent Quaker women of the area’s whaling days as well as the candle-making traditions that have lasted to this day. The title itself refers to candle clocks, which can be set to extinguish themselves after a certain amount of time, say 15 minutes. One of these clocks is used to excellent effect in the proceedings and has definitely sparked my interest in getting one of my own!

In addition to a delightful list of notes from Stella’s assistant’s diary, there was this delicious recipe included. Taken from the Nantucket Sampler of Recipes from the Homestead, I’ve edited it lightly here for format: 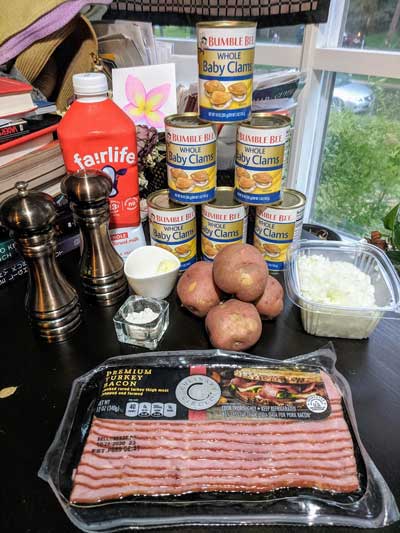 Fry pork and remove from kettle. 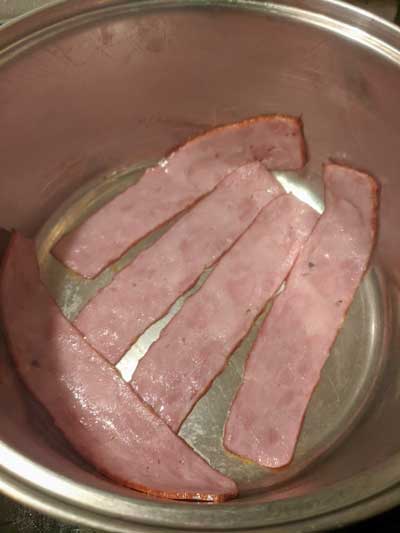 Fry finely chopped onions and potatoes in the fat until they are golden brown. 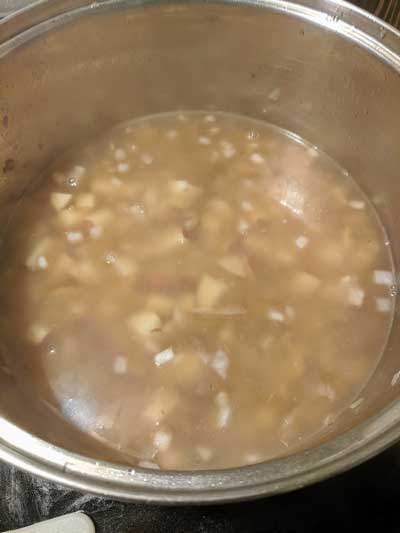 Wash the quahogs, removing the dark part from the stomachs. Chop or grind the quahogs quite fine. Cook with above for 15 minutes. Do not use any quahog water. 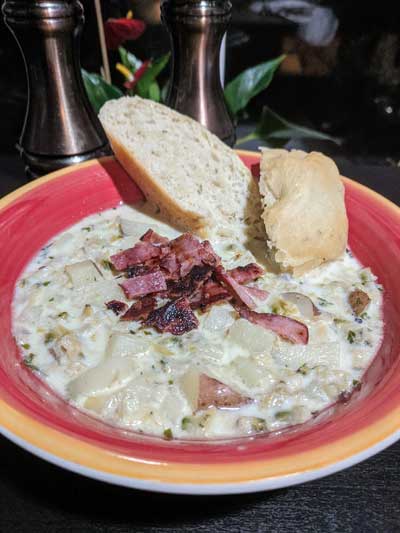 Since I could not get my hands on quahog clams, I had to make do with canned. While I’m sure fresh would have been superior, this was still exceedingly delicious! I did save the turkey bacon I’d used (with a sprinkle of olive oil to supplement the frying process) as a chopped garnish for later, and I highly recommend it.

If you’re fairly new to cooking, the last part of the recipe, which calls for flour thickening, is essentially asking you to make a roux. Melt the butter in a separate pan then add the flour to the melted butter, stirring constantly in a figure-eight motion with a wooden spoon until the mixture puffs up golden. Personally, I’d add at least one more teaspoon of flour to the mix than is called for here in order to get it to the right consistency. Then, add the milk and salt and pepper, stirring it all up before adding to the kettle or pot. I also added a generous portion of parsley and recommend seasoning to taste. The end result is a rich, delicious soup that was a big hit with my family. With the weather getting chilly around my neck of the woods, it’s definitely something I’m looking forward to making again soon.

Next week, we head south and inland to try another yummy soup, this time with a vegan twist, as we investigate another dreadful murder. Do join me!