Continuum, SyFy’s latest series (U.S. debut on January 14), drops a cop and some villains from the future into 2012 and asks: what could possibly go wrong? Multiple things, although perhaps not all of them were intended by producer Simon Barry.

The setup: lissome brunette Keira Cameron (American model/actress Rachel Nichols) is a “Protector”—cop—in the Vancouver of 2077. She has the requisite adorable young son and to-be-expected weasel-businessman husband (John Reardon). The world is run by corporations, which took over after “the governments went belly-up.” (I thought this was supposed to be set in the future…)

When venerable Liber8 resistance leader Eduard Kagame (Tony Amendola) carries out a major terrorist attack on the Corporate Congress, Keira is one of the cops who busts him and seven of his followers. All eight are sentenced to death in the world’s fastest capital trial. Keira is also one of the extra guards called in to help secure the death chamber at the mass execution six months later. However, the fix is in; the condemned manage to jack into a time machine and disappear. Keira tries to stop them and gets dragged along for the ride, which deposits her in the 2012 version of Vancouver. Keira’s mission: track down the Liber8 fugitives and try not to screw up her own future so she can go home to the adorable son and weasel husband.

In her new time zone, Keira meets two people who will presumably become important to her in future episodes. One is tall-dark-and-rugged VPD Detective Carlos Fonnegra (Victor Webster), who catches her poking around the time machine’s landing site. The other is Alec Sadler (Erik Knudsen), a tech geek who just happens to be the developer of the technology Keira wears on her uniform (more on that soon), and also just happens to be the young version of future Alec Sadler, corporate titan and one of 2077’s masters of the universe. 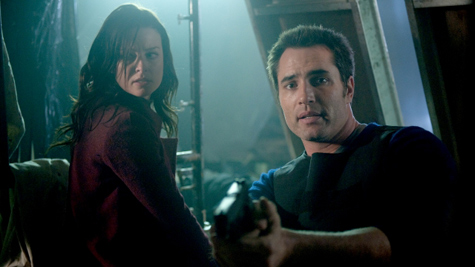 Time travel doesn’t work in Continuum the way it does in the Terminator series, so Keira (unfortunately) doesn’t have to come across naked. In fact, she manages to bring along all the tech built into her body and her slinky bronze-lamé uniform. She has ocular implants that serve both as cameras and as a heads-up display, and downloadable memory that records everything she sees. Her wearable tech so far includes an integrated bulletproof vest, invisibility cloak, switches to turn off surveillance cameras and hotwire ATMs, and a multi-shot syringe she uses to inject truth serum into the perps she collars. No doubt we’ll see more gadgets as the series moves along.

Produced for Canada’s Showcase cable channel in 2012, Continuum has already run for fifteen episodes in the Great White North. It’s stocked with somewhat familiar faces from Canadian and U.S. TV shows; the inescapable Brian Markinson plays yet another pissed-off cop, a role he’s been perfecting since DaVinci’s Inquest. Veteran co-producer Jeff King is also responsible for White Collar, some of Stargate SG-1, and Due South. All this says that the show is competently run, looks professional, and the plot points clock in on time.

But as SyFy’s late, lamented Canadian import Caprica showed us, Continuum could be so much more than an average cop show. The biggest problem goes to the core of the pilot episode: whenever the show’s creators confronted a dramatic decision, they in every instance took the easy way out. Our heroine Keira is pretty, principled, hyper-competent, honest (mostly) and a defender of truth, justice, and the Canadian Way. The Liber8 scalawags are stone killers with (so far) no discernible agenda other than to bust things up. Yet the corporate future of 2077 is put forward as a glossy Big Brother state, while Liber8’s Kagame starts the first episode with a freedom-to-the-people-down-with-corporate-dictatorship ideology that’s basically Occupy Vancouver on steroids.

Wouldn’t it have been interesting if Keira was a dyed-in-the-wool corporate thug who, when transported to the world of today, slowly realizes what her overlords have done to society and comes to sympathize with her prey? And at the same time, what if the Liber8 bunch came to the world of today all primed to stick it to The Man, then start to question their cause when they see the ills of non-corporate society and wonder if they’re really on the right side? Alas, unless the course set by the pilot changes radically, we won’t get that kind of nuance here.

Other issues stem from lazy writing. It’s really quite convenient that Keira’s tech all still works, even though the infrastructure that supports it exists mostly in Alec’s barn. How would she get along if she had only a 2012 cop’s tools at her disposal? Both Keira and the Liber8 gang adjust almost instantly to their new world; none of them seem at all put out by everything being different and strange, or even comment on the differences. (This was also a persistent failing of the late, unlamented Alcatraz.) The present-day VPD accepts Keira’s story of being an out-of-town cop without so much as making a single phone call to check her out. Really?

It’s early days yet. Continuum may yet surprise us by developing more depth and substance than it has now. In the meantime, Keira and Carlos are easy on the eyes, the stories can’t get any sillier than those of some American cop shows (or SyFy’s Warehouse 13), and there’s the whole time-travelers-altering-the-future thread yet to be explored. Catch an episode (Monday nights on SyFy) and judge for yourself.

Lance Charnes is an emergency manager and former Air Force intelligence officer. His 2012 debut international thriller Doha 12, now available on Amazon and at Barnes & Noble, has nothing to do with time travel or Canadians. He tweets (@lcharnes) about scuba diving, shipwrecks, and marine archaeology.