June 29, 2021
Steven Saylor, author of Dominus, joins us this week to discuss the riveting and brutal history of Constantine the Great. The main question he poses: should we celebrate Constantine as a saint or condemn him as a serial killer? Find out more below!

Here’s a spectacular setup for a historical crime novel:

There’s this emperor, see. We’ll call him C. But C is only one of four emperors because a while back the empire got divided into four parts. Emperors being what they are, all four are madly ambitious and jockeying for control, aiming to be the last man standing. Even in this crowd, C stands out for sheer ruthlessness. He’s brazen, battle-hardened, and not afraid to spill blood.

That includes blood in his own family. Two of his rivals happen to be his father-in-law and his brother-in-law. We’ll call C’s much younger wife F, her father M1, and her brother M2.

C figures the old man, M1, has it in for him, so he decides to beat him to the punch. He sets up a honey-trap. Like a sap, M1 swallows the bait, sneaks into C’s bedchamber, and stabs him. But it’s not C in the bed, only a “worthless eunuch” (so say the sources; presumably in a drugged stupor), who’s stabbed to death. Soldiers spring out of hiding and capture M1, literally red-handed. The disgraced old man is stuck in a dungeon, where he hangs himself; that’s the official cause of death, anyway. So much for C’s rival M1.

M2 poses a bigger challenge. He’s the lucky emperor who actually resides in the ancient capital. He has strong support from the old establishment and a substantial army gathered from the provinces. But C1 is confident of his military chops. He marches on the capital, draws M2 out of the city and onto the battlefield, and soundly defeats him. In headlong retreat, M2 drowns in a river. A triumphant C marches into the capital with M2’s head on a stake.

You might wonder how F feels about all this. I mean, her husband has now gotten rid of not just her father, but her brother as well. Maybe she’s 100 percent behind C; they have kids, after all, who stand to benefit from daddy leap-frogging up the career ladder. Or maybe F is a bit miffed—appalled, even—to witness the annihilation of the family she grew up with. Seeing your brother’s head on a stake could really ruin your day.

Complicating the domestic situation is C’s son from a previous marriage. We’ll call him C2; he’s now in his twenties and proving his own prowess on the battlefield. He’s like a younger, more dashing version of his dad.

Here comes the kicker. For reasons not entirely clear, C2 suddenly flees from the capital. C has him tracked down and put to death—his own son!

Then, while the imperial court is still reeling from the shock, C arranges another murder. F gets locked in her sauna, someone turns the furnace to full-blast, and F expires from whatever it is that kills you when you get trapped in a room with super-heated air and scalding-hot tiles on every surface. A pretty sadistic way to kill someone, I think you will agree.

Why did C kill his eldest son, presumably the apple of his eye, and then his own wife? There’s the mystery element!

There are a number of possible explanations. F and C2 were close in age; were they illicit lovers, turning C into a cuckold and plotting against him? Or was F alone the schemer? Perhaps, wanting to move her own sons up the rungs, she plotted to do away with her dashing stepson, filling C’s head with slanders, intimating that C2 wanted to replace him, perhaps even accusing C2 of raping her. C took the bait, killed his own son, but then realized he had been duped. Furious, he punished F with the closest thing to hell-fire you can arrange here on earth. (Later, C enacted capital punishment for adulterers, eloping couples, and even those who dared to help a couple elope. His method of choice: to burn them alive.)

Those are just two of the possible hypotheses. Diehard mystery mavens, I am sure, can come up with other intriguing ideas.

And now, the unmasking.

C is, of course, Constantine the Great, who eventually became sole emperor of Rome from A.D. 324-337. F is Fausta, his wife. Her father was the emperor Maximian, her brother the emperor Maxentius. The son who fled Rome and was put to death was named Crispus.

The story of Constantine and his ill-fated loved ones takes place near the end of my latest novel, Dominus, which follows the fortunes of a prominent Roman family from the reign of Marcus Aurelius (A.D. 161-180) to that of Constantine. Dominus is a panoramic family saga, with plenty of bloodshed, conspiracy, betrayal, and revenge, but it’s not a murder mystery.

But you might think some other enterprising author of historical fiction before now would have written a dandy murder mystery based on the tawdry tale of Constantine and his doomed relatives.

You might think that Dorothy Sayers, creator of Lord Peter Wimsy, would have mined the murder mystery potential when she turned her gaze on Constantine. But no; her three-act bio-drama Constantine the Great portrays poor Constantine as the real victim of the story. It’s a hagiographic whitewash.

I use the word hagiographic advisedly. Constantine is literally a Christian saint, at least in the Orthodox Church. He’s the emperor who rejected the old religion and embraced Christianity. His mother, Helena, is a saint to Catholics and Orthodox alike; she’s the pioneering archaeologist who went to Jerusalem and miraculously unearthed the True Cross.

Piety is the problem, I think. Constantine was viewed through a rose-colored religious lens by Slaughter, Waugh, and Sayers. None of them could see him as just another Roman emperor behaving as Roman emperors did, dealing out death and destruction on every side, a power-hungry beast who was mad, bad, and dangerous to know—especially if you were his nearest and dearest.

In Christianizing the Roman Empire, the great historian Ramsay MacMullen wrote, “The empire had never had on the throne a man given to such bloodthirsty violence as Constantine.” That’s a startling statement when you consider the homicidal reputations of Nero, Domitian, Commodus, and so many other predecessors of Constantine. That’s the Constantine I try to capture in Dominus. 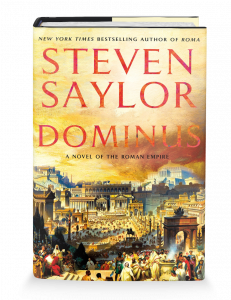 About Dominus by Steven Saylor:

A.D. 165: The empire of Rome has reached its pinnacle. Universal peace—the Pax Roma—reigns from Britannia to Egypt, from Gaul to Greece. Marcus Aurelius, as much a philosopher as he is an emperor, oversees a golden age in the city of Rome. The ancient Pinarius family and their workshop of artisans embellish the richest and greatest city on earth with gilded statues and towering marble monuments. Art and reason flourish. But history does not stand still.

The years to come bring wars, plagues, fires, and famines. The best emperors in history are succeeded by some of the worst. Barbarians descend in endless waves, eventually appearing before the gates of Rome itself. The military seizes power and sells the throne to the highest bidder. Chaos engulfs the empire.

Through it all, the Pinarius family endures, thanks in no small part to the protective powers of the fascinum, a talisman older than Rome itself, a mystical heirloom handed down through countless generations.

But an even greater upheaval is yet to come. On the fringes of society, troublesome cultists disseminate dangerous and seditious ideas. They insist that everyone in the world should worship only one god, their god. They call themselves Christians. Some emperors deal with the Christians with toleration, others with bloody persecution. Then one emperor does the unthinkable. He becomes a Christian himself. His name is Constantine, and the revolution he sets in motion will change the world forever.

Spanning 160 years and seven generations, teeming with some of ancient Rome’s most vivid figures, Saylor’s epic brings to vivid life some of the most tumultuous and consequential chapters of human history, events which reverberate still.

Steven Saylor is the author of the long running Roma Sub Rosa series featuring Gordianus the Finder, as well as the New York Times bestselling novel, Roma and its follow-up, Empire. He has appeared as an on-air expert on Roman history and life on The History Channel. Saylor was born in Texas and graduated with high honors from The University of Texas at Austin, where he studied history and classics. He divides his time between Berkeley, California, and Austin, Texas.