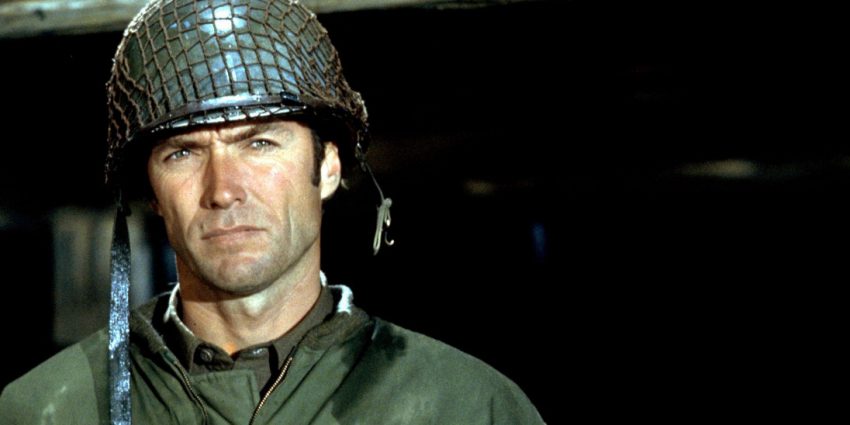 Clint Eastwood’s movie persona has long projected strength, brute force, and outsider roles in what would otherwise be traditional authority figures: police officers, cowboys, and what we are looking at here, soldiers in war films. Intriguingly, his first foray into boots and bayonets began high in the sky with the campy Tarantula (1954), where he plays an uncredited squadron leader attacking an eight-legged freak. Blink and you miss an early glimpse of the iconic visage doing what we will come to know best, prevailing over insurmountable odds. The decade that followed—and then some—were mostly cowboy roles in which he was catapulted to superstardom via Sergio Leone spaghetti Westerns. Success brought him to the top echelon alongside Richard Burton in Alistair MacLean’s Where Eagles Dare (1968).

The WWII Eagles plot: George Carnaby (Robert Beatty), a U.S. Army Brigadier General, is captured, interrogated, and held in a fortress high in the Alps of southern Bavaria. Enter Major John Smith (Burton) and U.S. Army Ranger Lieutenant Morris Schaffer (Eastwood), who lead a team of commandos to rescue the general. Accompanying them is an MI6 agent named Mary Ellison (Mary Ure), whose purpose for being there is initially known only to Major Smith.

Where Eagles Dare is a big, don’t-think-about-it-too-closely thriller that is still great fun. The title comes from Richard III: “The world is grown so bad, that wrens make prey where eagles dare not perch.” Best line comes when Lt. Morris Schaffer asks, “Look, Major, this is primarily a British operation. I’m an American. I don’t even know why the hell I’m here.” Major John Smith replies, “Lieutenant, you’re here because you’re an American.”

Whereas Where Eagles Dare was crafted in the straight-forward tradition of big-budget, bloated mega-spectacles of yesteryear, his next military effort, Kelly’s Heroes (1970), acknowledges the counterculture of the day. Set in 1944, a mechanized reconnaissance platoon of the 35th Infantry Division is ordered to hold their position against not only the Germans but friendly fire. Master Sergeant “Big Joe” (Telly Savalas) sums up their plight: “To the right, General Patton. To the left, the British Army. To the rear, our own goddamned artillery. Besides all that, it’s raining. And the good thing about the weather is it keeps our Air Corps from blowing us to hell because it’s too lousy to fly.”

Brightening their prospects, Private Kelly (Eastwood) learns that there’s 16 million dollars’ worth of gold behind enemy lines and decides to become a soldier of fortune with the help of the craziest assortment of loons since Col. Hogan, including scene-stealer Donald Sutherland as Sergeant “Oddball,” who is always cautious to avoid “negative waves.” The screenplay by Troy Kennedy Martin sparkles as Kelly, Big Joe, and “Crapgame” (Don Rickles) quickly convince a nervous Oddball.

Kelly: Well Oddball, what do you think?
Oddball: It’s a wasted trip baby. Nobody said nothing about locking horns with no Tigers.
Big Joe: Hey look, you just keep them Tigers busy and we’ll take care of the rest.
Oddball: The only way I got to keep them Tigers busy is to LET THEM SHOOT HOLES IN ME!
Crapgame: Hey, Oddball, this is your hour of glory. And you’re chickening out!
Oddball: To a New Yorker like you, a hero is some type of weird sandwich, not some nut who takes on three Tigers.
Kelly: Nobody’s asking you to be a hero.
Oddball: No? Then YOU sit up in that turret baby.
Kelly: No, because you’re gonna be up there, baby, and I’ll be right outside showing you which way to go.
Oddball: Yeah?
Kelly: Yeah.
Oddball: Crazy … I mean like, so many positive waves… maybe we can’t lose, you’re on!

In the 16 years between Kelly’s Heroes and Heartbreak Ridge, he only played in two movies with any sort of war affiliations. First, The Beguiled (1971), a brilliant Southern Gothic drama, and the rather dull 1982 techno-thriller, Firefox. Heartbreak Ridge (1986), however, planted him boots on the ground full force, though a far cry from the cartoonish antics of Where Eagles Dare and Kelly’s Heroes. Worn premise has just about to retire: hardened Korean War veteran named Tom Highway (Eastwood) is asked to whip a bunch of loser recruits into shape before the Grenada invasion. Here’s an example of his vulgar approach:

“I been pumping pussy since Christ was a corporal. I can tell you, the best damned poontang I ever paid for was in Da Nang. The girls were checked out daily. And we got ourself laid in a safe, orderly, proficient, military manner. That is until some suckhead writes home mama and says he dipped his wick in the Republic of South Vietnam. Then the shit hits the fan. A committee of congressmen who asshole to asshole who couldn’t make a beer fart in a whirlwind, start telling your basic-ass-in-the-grass, Marine ‘No more short time.’ We responded in true Marine Corps fashion. We salute, do an about face, double time back to the boom-boom garbage dump where we get the clap, and the drip, and the crabs and a generally poor attitude towards the female of the species. War is hell, boy. That’s a fact!”

Not easy on the ears, if it ever was, in the #metoo era but credible as history to anyone that survived basic training in the last century. At 56 years of age, Clint is believable, looking rugged for the training exercises and eventual skirmish that was filmed in part on the real island of Grenada. There’s a subplot with Marsha Mason as his ex-wife who got tired of playing second fiddle to the Corps, but unfortunately, their back-and-forth seems to lack any real emotional depth—simply existing to counterbalance the action. Still, those guts and glory sequences have spunk, as movie critic Roger Ebert noted, “… Eastwood, as the producer, director and star, caresses the material as if he didn’t know B movies have gone out of style.”

For a man who during the Korean War spent his military stint as a lifeguard in Northern California (and according to one ex, he’s fairly sensitive about it), Eastwood has definitely left an indelible impression on the genre, most notably in the last few years, directing—but not starring in—Letters from Iwo Jima (2006), Flags of Our Fathers (2006) and American Sniper (2014).

There’s a maturity in this triad that nicely bookends the filmmaker’s ode to the armed forces. The epochal photo taken by Joseph Rosenthal of soldiers raising Old Glory on Iwo Jima is the basis for Flags, the finest of the trio (though I’d hate to argue against anyone making a case for the other two, especially Letters). We witness the horrific nightmare as 110,000 Marines, U.S. Soldiers, U.S. Navy Corpsmen, and others take on the soundly entrenched Japanese Imperial Army and win after a five-day battle that left 6,821 dead and 19,217 wounded. Then, political bureaucrats seek to use the photograph (the film explores, in fact, that there were two flags raised that day) as propaganda to raise money for the duration of the war, sending three of the surviving heroes—John Bradley (Ryan Philippe), Ira Hayes (Adam Beach), and Rene Gagnon (Jesse Bradford)—to headline a national tour to sell U.S. bonds. Hayes, in particular, is uneasy in the limelight, not being able to forget his brothers who went down on that island in the Pacific. Heartbreaking, vivid, and elegiac filmmaking not to be missed.