February 15, 2022
Frederick Weisel’s latest novel, The Day He Left, tells the story of a middle school teacher who leaves for work one morning and never arrives. Here Frederick reflects on the public school classroom as a setting for mysteries.

Mysteries and thrillers have long been set in institutions of learning. Many of these novels play out in universities and elite boarding schools in New England and in the British countryside. With their remote campuses and secret student societies, novels like Donna Tartt’s The Secret History and Tana French’s The Secret Place make wonderful gothic thrillers. Collectively, they’ve formed a genre that’s come to be known as the “Dark Academy.”

But when I wrote my novel The Day He Left, I was drawn to a different school setting: a public middle school. This environment may not be as erudite as those locales, but it’s no less hazardous. These schools have been the setting for other good mysteries, including Kanae Minato’s Confessions and Megan Abbott’s Dare Me.

I was first awakened to the idea for my novel by a small newspaper article about a teacher who had disappeared. Trying to imagine the circumstances behind the disappearance, I found myself wanting to describe a middle school and to explore the characters and conflicts found there.

As I developed the story and spoke with teachers and students, here are a few things I found.

Like country manors and long-distance trains, classrooms offer one of the prime ingredients for a good mystery: confinement. Teachers and students are trapped together for an hour or so several times a week. If conflicts arise, it’s difficult to escape them.

Public school classrooms are also settings for success or failure, which means they can become arenas for high drama, where slight incidents can turn into tragedies in the hearts and minds of young students. Today’s classrooms add newer issues like texting, TikTok, pills, trigger words, school shootings, politicization of subjects, and helicopter parents—not to mention mask and vaccine mandates.

A friend who teaches in a middle school in Northern California recently told me that public school classrooms in the current era are places of constant tension. The first thing you see on entering his classroom is a large sign that lists instructions on what to do in the event of an active shooter and how to “fight back.” In this environment, students are expected to discuss conflicts in Jane Austen’s Emma and sit through a lesson on plant photosynthesis.

In my novel, as a police detective interviews a teacher, he thinks about the pressures on students:

Was it easier now than years ago for things to go wrong? Or, was it really no different? Born into the wrong family. Walking home the wrong way, at the wrong time. Talking to the wrong person. Ending up caught in a photograph—on a phone, online, clicked on, seen.

I also wanted to explore how idealistic teachers who love their subject have to try to make the same material interesting year after year for each new class. To engage students, teachers may ask them to write their own poetry, re-enact historical events, or keep journals. But these teachers must also be aware that they don’t know exactly how students are going to interpret such activities and where they might lead.

In some cases, the subject matter of the lessons can lead to conflicts. In The Day He Left, the school principal tells a detective about the challenges faced by the missing teacher, Paul Behrens:

But the thing about Paul is, he’s teaching English. He has the kids reading stuff about feelings. You’ve got Salinger and Cummings and Edna St. Vincent Millay—you know, ‘what lips my lips have kissed and where and why.’ All that . . . impressionable stuff.

Even subjects as seemingly benign as algebra can have implications for middle school students. When Detective Eden Somers interviews Claire Behrens, the thirteen-year-old daughter of the missing teacher, they have this exchange:

“Our teacher,” Claire said, “told us the word ‘algebra’ means the ‘reunion of broken parts.’”

“Everything fits together, if you do it right.”

The students themselves are interesting characters for a crime story. Middle school students are eleven to thirteen years old. It is an age on the cusp of change. No longer children but not yet adults, they reject the childish interests of their past and their treatment as children. But they struggle to understand the adult world and the changes their own bodies are undergoing. For many, it’s a time when they discover and test their gender identity.

Given this inner turmoil, these students are filled with secrets—what they don’t want others to know about themselves, what they think they know about others. This web of secrets provides the life force for mysteries.

Middle and high school students may also be simultaneously unaware of the consequences of their actions, and forced to confront very adult repercussions. In my novel, two young girls from different families confront the sudden death of a parent in one instance and the arrest of a parent in another—and with these developments, the loss of the girls’ own innocence. For any crime novel involving adolescents, the final mystery may not be the crimes committed but this very real end of innocence. 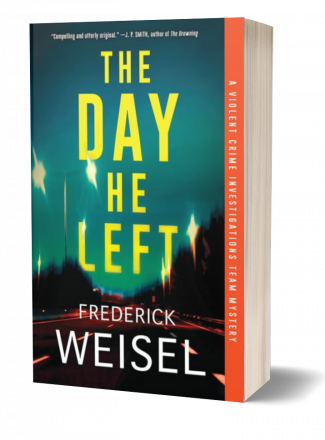 About The Day He Left by Frederick Weisel:

After he was gone, the only things left behind were secrets

Annie has fallen out of the habit of listening to her husband. She and Paul have been married for a long time; it’s easy to nod as he drones on, responding to his voice while completely ignoring every word he says. That becomes a problem, of course, when Paul disappears and the police have questions. Was Paul having issues at work? Is there any reason to think he might harm himself? Annie doesn’t know.

An unsettling photo found amongst Paul’s things turns the investigation toward his job as a middle school teacher and a troubled girl who is hiding secrets of her own. But what exactly happened to Paul on the day he left for work and never made it to the classroom? Is his disappearance related to a local heroin trafficking operation? As Eddie Mahler and the members of the Santa Rosa Violent Crime Investigations Team rush to find the teacher, they discover the members of his family have hidden lives of their own, and that Paul may not have been running away but toward something that could ruin his career and marriage—and even cost his life.

FREDERICK WEISEL is the author of a new procedural series about five detectives on the Violent Crime Investigations Team of the police department in Santa Rosa, California. The first in the series, The Silenced Women, was published by Poisoned Pen Press in February 2021. The second novel, The Day He Left, will be published in February 2022. His website is frederickweisel.com.