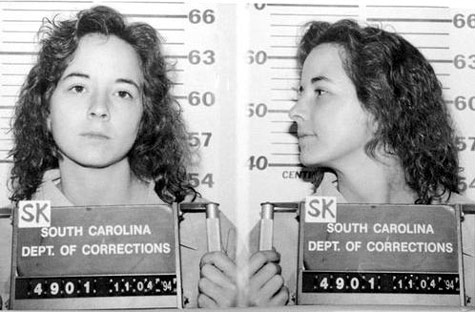 Alice Crimmins always maintained her innocence, but the police and much of the press believed Alice Crimmins was a slut and therefore a murderer. She was convicted of manslaughter, but that conviction was overturned. She was retried in 1971 and convicted of the first-degree murder of her son and manslaughter of her daughter. In 1973, she was again set free. Upon review, the Appellate Division reversed the murder conviction, and affirmed the manslaughter conviction, but Crimmins never returned to jail. While in jail she had married her wealthy lover, Anthony Grace. She lived with him, and his money, until his death. Fast forward to October 25, 1994. Susan Smith, then 23, claims that a black man hijacked her car and drove away with her children inside. A nation watches horrified as the grieving mother makes emotional pleas on television for the safe return of her two small boys, three-year old Michael, and 14-month old Alex. Nine days later, the children are found dead, strapped into their seats in the car, lying at the bottom of John D. Long Lake in Union, South Carolina.

The police arrested Smith and tried her for murder.

Was history repeating itself? Or is it possible that Susan Smith knew Alice Crimmins’s story? A made-for-TV movie called A Question of Guilt based on the Crimmins affair came out in 1978. John Guare wrote a play inspired by Crimmins, Landscape of the Body, that opened in 1977 and has since been restaged many times. Two Small Bodies by Neal Bell was made into a film in 1993.

Did Smith decide that if one slut could murder her kids and walk away with a rich husband, why not two?

Sheer speculation, to be sure, but Smith might easily have seen some of herself in Alice Crimmins. Both were in troubled marriages, both had wealthy men on the side, both had two children cramping their style.

Smith was, like Crimmins, a busy little beaver. As a high schooler, she took up with an older, married man, got pregnant, had an abortion, and then, while still dating the married man, started seeing someone younger. When the older man found out, he broke off with her: Susan attempted suicide. Later, she became pregnant by another man, David Smith, and the two got married. During the marriage, Smith had several affairs, and in August, 1993, after the birth of her second son, she hooked up with her wealthy boss, Tom Findlay. But it seems Susan just couldn’t keep her lips dry, and one night Findlay found her in his own hot tub kissing another man. He called it quits, breaking the news to her in a 1500-word letter one week and a day before she sent her kids into the drink.

Findlay claimed that his problem with her was her children. “Susan, I could really fall for you,” he wrote. “You have some endearing qualities about you, and I think that you are a terrific person. But like I have told you before, there are some things about you that aren’t suited for me, and yes, I am speaking about your children. I'm sure that your kids are good kids, but it really wouldn't matter how good they may be… the fact is, I just don't want children. These feelings may change one day, but I doubt it.”

Fair enough, Findlay. But you knew all along that she had kids. Is it possible something else might be eating you?

“Susan, I am not mad at you about what happened this weekend. Actually, I am very thankful. As I told you, I was starting to let my heart warm up to the idea of us going out as more than just friends. But seeing you kiss another man put things back into perspective…. Of course you have to make your own decisions in life, but remember… you have to live with the consequences also. Everyone is held accountable for their actions, and I would hate for people to perceive you as an unreputable person. If you want to catch a nice guy like me one day, you have to act like a nice girl.”

Gee, a nice guy and a catch. You don’t find that too often. Well worth going to extraordinary lengths for.

But what to do?

Had she been a tad more perspicacious, Smith might have discerned that what really gnawed Findlay was the promiscuity. If she had invested in some cotton dresses with high collars, and kept her hands to herself a little, his feelings for kids may indeed have changed one day.

Alas, she fell for the kids dodge. If only I didn’t have those kids.

But wait a minute! What about that woman?—Alice Crimmins. That could work.

On October 25, 1994, Susan Smith strapped her barefoot sons into their car seats, drove to John D. Long Lake, got out, put the car in drive, and watched as her sleeping children sank beneath the murky waters of the lake to die.

But if killing your kids is hard, even for a woman like Smith, with a documented history of abuse and depression, then living with it is even harder. Although she had pled not-guilty, she eventually broke down and confessed. Unlike Crimmins, she remains incarcerated in Florida, with no chance of parole. And despite her removal of the kids-problem, Tom Findlay has, so far, not announced his intention to marry her in prison.

Is there a lesson in all this? I don’t know. Getting away with murder may be harder than people like to think. And if Alice Crimmins proves a very poor role model for a child-killer, it’s probably because she isn’t one.