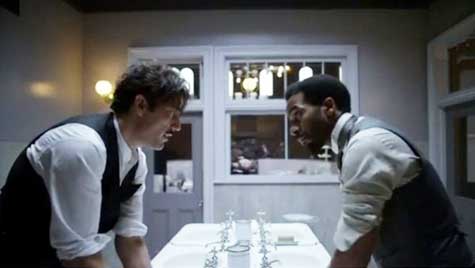 If there’s one point that The Knick has driven home time after time, it’s that early 20th Century surgery was not easy. If the actual process of cutting you open didn’t kill you, the recovery process certainly could, as antibiotics weren’t around to prevent infection. A surgeon of these times was similar to a baseball player—succeeding 30% of the time was considered good.

So as “They Capture the Heat” opens with one of gangster Bunky Collier’s henchmen suffering a severe leg wound, we’re left assuming breathing, let alone walking, are not in the man’s future. But that’s not okay for Collier. Not only does he demand that his underling must survive, but the leg must be saved too. If not, he’ll kill everyone involved, which in this case, includes John Thackery, Algernon Edwards, and Herman Barrow. Cue the suspense (and the forced close-up of Collier’s holstered gun).

Being that Collier’s arrived at The Knick in the early hours of the morning, Thackery assumes he’ll be the only surgeon on site, since Bertie and Gallinger live further away. But Thackery doesn’t know about Edwards’ secret late-night basement clinic. Upon seeing Edwards at the hospital, Thackery’s objections take a back seat to pragmatism, creating an intesting situation where both Thackery and Edwards will finally work together. Now of course we’re not going to have a wannabe gangster kill off three main characters 15 minutes into the fifth episode, but this plot device was welcomed, as we’re all hoping that Edwards and Thackery put their dual-geniuses together and kick some medicinal ass. And for at least a few hours, they did.

But things revert all too quickly back to normal when Thackery and Edwards are outside enjoying some fresh air after the successful surgery. Herman Barrow slithers up, compliments Thackery on the surgery and takes out a flask, making it a point to hand it over to Thackery right in Edwards’ face. So much for things changing.

Well, that’s not entirely true. Things might not be changing hierarchically at The Knick, but they are technologically. The town is abuzz with news of a new invention—the x-ray machine. It’s the future of medicine, marvels Thackery. But the future comes with a price—$3,000 to be exact—and given the hospital’s limited expenses, that’s a hefty amount to procure. Thackery rebuts the tentativeness in the board room, saying that The Knick will never be mentioned in the same sentence as the uptown hospitals if it continues to fall behind. Owning an x-ray machine could put The Knick on the map. Sadly, for a while, it seems as if Thackery’s pleas will have been for naught, until we find Barrow and an overpriced dinner courting one of the city’s socialites, who in an effort to keep up with his deep-pocketed friends who have been donating elsewhere, decides to purchase an x-ray machine for The Knick!

Barrow’s luck doesn’t end there, though. He’s also been asked to arrange a meeting between a policeman and Collier. The policeman has a proposal for the gangster—he wants a cut for bringing prostitutes to Collier, rather than deporting them, and Barrow is there to piggyback off the deal for making the connection. Collier may hate Barrow, but he sees this as a good deal and agrees to the terms. Could Barrow’s luck be changing?

Elsewhere, we briefly looked in on Dr. Everett Gallinger and his wife Eleanor, where tragedy might strike soon. The Gallingers’ baby girl is found to be sick, and her status is left uncertain when the episode ends. While Dr. Gallinger may be a complete jerk, and he deserves some negative karma, I hope the show doesn’t kill off another baby. My guess: Algernon saves the day, putting Gallinger forever in his debt. I hope we touch base with Cornelia again next week. Between her ongoing investigation with the health inspector Jacob Speight, and her clear-to-everyone-but-her-husband disinterest in moving across the country with her fiancé. And I hope to see more of Thackery learning to ride a bike. Things are heating up between Thackery and Lucy…

Joe Brosnan is an editor and writer for Criminal Element. He spends his time equally obsessing over the Game of Thrones series and the New York Giants, and is only now realizing how weird it is to write in the third person. You can follow him on Twitter @joebro33.