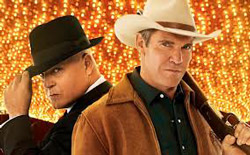 Vegas, the new show staring Dennis Quaid and Michael Chiklis on CBS Tuesday nights, seems to be getting better and better each week. There have only been a handful of episodes so far, but the culture clash between the sleepy ranching town and the budding gambling haven is rich for storytelling. The face-off between Dennis Quaid’s reluctant sheriff, Ralph Lamb, and Michael Chiklis’s up and coming mobster, Vincent Savino, is well done.  The ’60s sets and wardrobe are fun to watch and so far the crime-solving has been aces. It’s a true diamond in the rough.

The cast is stellar, and besides Quaid and Chiklis, we meet: Carrie-Anne Moss, of Matrix fame, who plays the honest assistant district attorney, Katherine O’Connell. Her character and Quaid’s grew up on adjoining farms, and judging from the lingering glances between the two, there may be something more between them in the future. I say she’s honest because her boss, District Attorney Rich Reynolds (Michael Reilly Burke), meets with and takes money from the mob. Jason O’Mara from Band of Brothers plays Sheriff Lamb’s brother and deputy, Jack Lamb.  You may also remember him as the evil Billy Croelick on The Closer or Detective Sam Tyler on the short-lived, but excellent, U.S. version of Life on Mars. His character has been underutilized so far, but I have great hope, especially considering his totally inappropriate crush on Mia Rizzo… Sarah Jones, formerly Detective Rebecca Madsen on Alcatraz, plays Mia Rizzo, Savino’s counting-room chief and daughter of one of the other Chicago mob bosses, Johnny Rizzo (Michael Wiseman). Sent there to keep an eye on Savino, she keeps her cards really close to the vest and I think she’s only going to be loyal to herself, daddy or not.

There are some potential issues with the show. If they don’t change things up a bit down the road, a weekly bout between Quaid and Chiklis could get monotonous, but we’re not there yet. The writers will also have the continuous challenge of explaining why these mobsters just don’t knock off Sheriff Lamb. The last sheriff didn’t last long. Saying it’s too soon to kill another sheriff without arousing Fed suspicion can only last so long. Especially since the cars that get blown up every week and the high body count would also pique fed interest. The cast still seems like it needs to gel a little further, but sometimes that happens with new shows.

Overall, I think the show has legs.

The fresh character introductions are deepening the story possibilities, like Savino’s wife, who doesn’t want to be married to a mob boss, but doesn’t seem to mind spending his mob money, or the complicated Mia. I’m also intrigued by the storyline of Savino trying to get into legitimate business with the Tumbleweed casino, although I don’t see how he can manage it without some mob involvement. (After watching six seasons of The Sopranos, I consider myself a mob expert.)

CBS has announced that it has picked up the entire season of Vegas (as it did with Elementary) so this freshman drama has made the first hurdle of TV show survival.

I’m looking forward to more episodes. Are you watching Vegas? What do you think?