Everybody in the world has a double, the saying goes. And for Donald G. Carr, a Green Beret who disappeared in Laos more than 40 years ago, that doppelganger was a German bird smuggler named Gunter Dittrich.

The two men—one a war hero missing in action, the other a small-time criminal, are forever linked by events that began in mystery and ended in acrimony. In between, the strange case of Donald Carr also touched upon cynical deceit and hidden agenda, baffling inertia and endemic distrust, blind faith and altruistic sacrifice.

It’s a story that Jay F. Sullivan, a businessman from the small town of Dover, Massachusetts, knows better than almost anyone. The Vietnam veteran chased Carr’s ghost for more than a year, a pursuit that cost him thousands of dollars and untold hours of anxiety. As his reward, Sullivan got the closest—all the way to the heart of the darkest of scams.

In the summer of 1991, a flurry of pictures of alleged American prisoners of war erupted in the national press. At the time, the Pentagon listed more than 2,200 servicemen unaccounted for in Southeast Asia, a tragic, troublesome legacy of the Vietnam War. And no picture created a stir quite like the “Carr” photo. Released by a controversial, California-based POW hunter, Jack Bailey, who headed Operation Rescue, the image of a smiling, jug-eared man purportedly taken at a prison camp in Laos bore an eerie similarity to pictures of Army Special Forces Capt. Carr, who disappeared July 6, 1971, while flying a covert, armed reconnaissance mission over enemy territory in southern Laos. A decorated former Air Force pilot, Bailey explained that he had obtained the photo from “Mr. X,” a Lao source who told him the man in the photo called himself “Garr” and suffered brain trauma from his plane crash.

The picture caused a sensation among POW activists, Washington politicians and Department of Defense (DoD) brass and quickly topped the Pentagon’s investigative list. A respected forensic anthropologist superimposed the two images and said, “I don’t think it’s the same man; I know it’s the same man.” Within a week of the photo’s publication, the U.S. Senate had created a special committee on POW/MIA Affairs.

Bailey, a pariah among some POW groups for his aggressive fund-raising appeals, found himself briefing the Pentagon about alleged POW camps in Laos. The frenzy also got Sullivan’s attention and for good reason—he had obtained the same “Carr” photo two months earlier in Bangkok. Bailey and Sullivan had another thing in common—their primary source. For both men, the conduit to the murky world of private, covert POW/MIA operations was Phoumano Nosavan. The leader of a small Lao resistance group, Phoumano was the son of the late Phoumi Nosavan, a right-wing protégé of the Central Intelligence Agency who briefly ran Laos courtesy of a rigged 1959 election, then amassed a fortune through opium and gold smuggling before fleeing to a comfortable Thai exile.

After searching Southeast Asia for six years and spending more than $100,000 of his own money, it looked like Sullivan’s quest had finally paid off. In late August, he traveled to a small town along the Mekong River in northern Thailand with Phoumano for clandestine meetings with several Lao who claimed to hold American POWs, perhaps including Carr, near the Chinese border.

A few weeks later, Bailey and Carr’s former wife flew to Bangkok, where Phoumano briefed them about the same POW camps. In early October, Bailey had a Pentagon meeting with Secretary of Defense Dick Cheney and provided camp details. A few weeks later, a high-level DoD team accompanied Bailey to Thailand, where he promised to deliver Mr. X. Coincidentally, Sullivan was also in Bangkok, trying to nail down a meeting with Mr. X through Phoumano.

The mysterious Mr. X never materialized. Phoumano could only produce a shady Thai character, code-named “Mario,” an alleged middleman to Mr. X who met with Bailey and DoD one night, then Sullivan the next. Sullivan made a agreement to travel to the Lao border, and then waited 36 hours for Mario to show. He never did.

Crushed and depressed, Sullivan flew home. Phoumano kept sending tantalizing news. He had met with Mr X and given him equipment to videotape Carr. Mr. X was in Bangkok, he said. Mr. X had disappeared, he soon amended, but Phoumano had compelling photos of another POW.

Meanwhile, the Pentagon took a closer look at the “Carr” photo and several outtakes, which showed electrical fixtures and telephones, although the camp area pinpointed by Bailey had neither electricity nor phone service. Photo analysis by Los Alamos National Laboratories concluded the cages in several pictures were for animal, not human, confinement and that the vegetation was cultivated, not wild, and of a tropical, not mountainous, nature.

Investigators began canvassing Thai animal dealers and soon located the compound that figured in the “Carr” photo. It wasn’t in remote Laos, but within the urban sprawl of northern Bangkok, just a few miles from Don Muang airport. It wasn’t even a secret site—at least three animal brokers listed the address in the Bangkok Yellow Pages. Several employees called the man in the photo “Gunter,” not Carr. An animal activist identified the subject as Gunter Dittrich, an East German citizen who worked as a courier in the illegal exotic-animal trade, specializing in smuggling birds, which he drugged and stuffed into his pockets and sleeves. “Gunter Dittrich is not missing in the jungle, but he should be,” said the activist. “He’s a drunken, sodden alcoholic who’d do anything for money.”

In February 1992, ABC’s “World News Tonight” labeled the “Carr” photo a fraud. Millions of viewers saw the self-immolation of Bailey, who physically attacked correspondent James Walker when confronted with evidence about Dittrich, who was jailed in Germany on wildlife smuggling charges.

Soon afterwards, Sullivan visited the Bangkok animal dealer, where a worker told him a head-spinning tale that led to one incredible conclusion: Gunter Dittrich was actually Donald Carr. But it was another lie. Dittrich was still in Germany. Distrustful of the Pentagon, Carr’s ex-wife even flew to Frankfurt to see for herself. The man in the photo was not her husband, she admitted.

While the Pentagon finally identified the man in the picture, the question remains: Who ultimately was responsible for a photo scam good enough to galvanize even the Pentagon? Was it Bailey, or was he fed the photo by Phoumano? If so, how would Phoumano have the wherewithal to match Dittrich to old photographs of a black-ops pilot? One former career U.S. intelligence official told me the “Carr” photo smelled like a deflection campaign orchestrated by Russian intelligence—which was accused of transporting American POWs with high-tech knowledge to the Soviet Union during the Vietnam War—to discredit any investigation into missing American servicemen.

Sullivan, who continues his unofficial search in Southeast Asia, no longer works with Phoumano. To this day, the fate of Donald G. Carr remains unresolved, shrouded in mystery and triple-canopy jungle.

Christopher R. Cox reported on the POW/MIA issue while a feature reporter for the Boston Herald newspaper, including numerous trips to Southeast Asia. The Carr photo was the inspiration for his upcoming mystery-thriller, A Good Death (Minotaur). 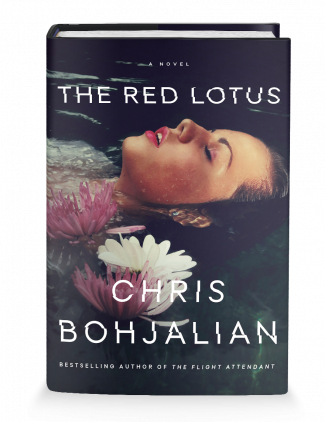 Cinemax is really amping up their original series lineup! Outcast has been everything it promised and more—seriously, I was hooked from the terrifying roach-and-finger dinner from the opening scene. If you haven't seen it yet, go watch Outcast and read Angie's great reviews! Now, they've got a new series premiering September 9th, called Quarry—based on… The Sympathizer by Viet Thanh Nguyen features a captivating, duplicitious narrator who's a communist sleeper agent living in America after the Vietnam War. Nominated for the Edgar Award for Best First Novel. While it’s likely that the Vietnam War spawned many bookshelves full of novels written by Vietnamese authors, an awfully small number of these… Now Win This!: What is War Good For Sweepstakes