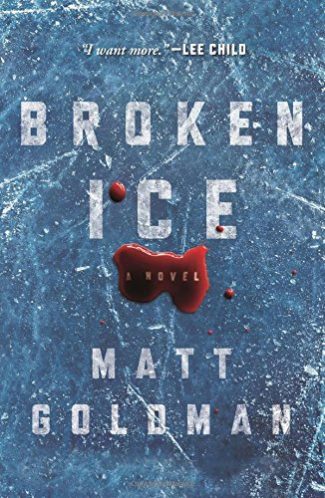 Broken Ice by Matt Goldman is the second book in the Nils Shapiro series.

Nils Shapiro has been hired to find missing Linnea Engstrom, a teenager from the small northern hockey town of Warroad, MN. Most of Warroad is in Minneapolis for the state high school hockey tournament, and Linnea never returned from last night’s game. Linnea’s friend Haley Housch is also missing―and soon found dead.

Shot through the arm with an arrow at the Haley Housch crime scene, only the quick work of medical examiner Char Northagen saves Nil’s life.

Nils should be in the hospital recovering from his near-fatal injury, but he knows that the clock is ticking. Linnea could be anywhere, and someone doesn’t want her found. Is Linnea a victim, or is she playing a dangerous game? As bodies start piling up, the clues lead Nils and Ellegaard north to Warroad, a small, quiet town with many secrets to hide.

I saw Roger Engstrom three times—the second two he was dead. But the first time he sat on a tufted leather chair in the Saint Paul Hotel’s Harold Stassen Suite with a Yorkshire terrier on his lap. The dog was the result of neither intelligent design nor natural selection. Man created the Yorkshire terrier, and Man had made a terrible mistake. If your full-grown dog fits in a bag designed to carry keys and a wallet, it’s not a dog you’re toting around—it’s an accessory.

Roger had curly blond hair threaded with silver, was tall and lean except for a soft belly that hung over his belt. He wore a navy long-sleeved polo tucked into khaki pants that rode up his legs revealing socks festooned with images of computer chips. Duck boots covered his feet, protection from Minnesota’s March slush.

He scratched between the little creature’s ears and said, “Thank you for seeing us on short notice, Nils.” His voice was high-pitched and soft. “The Missing Persons unit of the St. Paul police are doing everything they can, but we know about your success in Duluth and then again last year in Edina. We hear you’re the best there is, Nils. And our Linnea deserves the best.”

Roger referred to murder cases, not missing persons, but I kept that to myself. “When did you first notice your daughter was missing?”

Roger looked to my right. His wife, Anne, sat on the loveseat beside me. I thought it strange Roger chose not to sit next to her but rather in the lone chair. It was his meeting, I supposed, and he was going to run it.

Anne wore hiking boots, canvas work pants, and a plaid flannel shirt of reds and blues. She was dressed like a roofer but was far more feminine than her not-so-masculine husband. Her gray eyes looked out from behind oversize eyeglasses. The lenses were so big I worried birds would fly into them. She had shoulder-length chestnut hair with bangs that brushed the top of her glasses. Her hair color looked expensive and almost real.

“What did she do last night?”

“She went to the hockey game. We all did. It’s why most of Warroad is here.”

Warroad, Minnesota, lies six miles south of the Canadian border. Its citizens and a few others refer to it as Hockeytown USA, a deserved moniker considering the population is fewer than two thousand people, but no United States Olympic Hockey Team has won a gold medal without a player from Warroad on its roster. The tiny town has sent several players to the NHL and won four Minnesota State High School Hockey championships competing against Twin Cities–area powerhouses and the hockey-centric Duluth schools.

Anne said, “Linnea sat in the student section with her friends. After the game, they all walked to dinner at Burger Moe’s to celebrate the victory, and somewhere between the Xcel Center and the restaurant, Linnea disappeared.”

“So Linnea never made it to Burger Moe’s?” I said. Anne shook her head. “That’s not even a two-block walk. No one noticed her leaving the group?”

“We’ve spoken to Linnea’s friends,” said Roger. “They all said the same thing. She was there. Then she wasn’t. There were over eighteen thousand fans last night and they all poured out of the arena at once. And no one saw anything unusual. That’s why the police are treating Linnea as a runaway. That and she’s still seventeen.”

“Another senior from Warroad. She’s missing, too.”

Anne relayed the information as if it were happenstance, as if she were talking about the weather or what they’d eaten for lunch that day. “Were Linnea and Haley together?” I said.

“No,” said Anne. “Haley and Linnea aren’t close. They didn’t sit near each other at the game, and Haley’s group wasn’t headed to Burger Moe’s. All anyone knows is Haley disappeared from the crowd outside the stadium like Linnea did. But Haley’s eighteen, so they can’t consider her a runaway.”

Two girls from the tiny town of Warroad go missing at the same time. Only insular parents would believe that’s a coincidence. The police wouldn’t, and I sure as hell didn’t. “Do you have a picture of Linnea?”

Anne found a photo on her phone and handed it to me. If Anne had told me I was looking at a picture of her at seventeen, I would have believed her. The same chestnut hair. The same gray eyes. Only Linnea’s were playful instead of resigned. Maybe more than playful. Maybe a little wicked. A girl with Linnea’s looks would have an array of trouble offered to her. I turned toward Anne. “Do you think Linnea ran away?”

“No,” Anne said. “Linnea’s a happy girl. Popular in school. The only possible reason I can think she’d run away is to take off with her boyfriend. But he’s not going anywhere.”

Anne looked at me with indifference or fatigue or perhaps numbness over her daughter’s disappearance. “Luca Lüdorf? He’s Warroad’s star player.”

“Have the police questioned Luca?”

“Yes,” said Roger. “We talked to him, too. He’s devastated. He has no idea where Linnea could be. Hasn’t heard a word from her.”

“What happens when you try her cell phone?”

“Straight to voice mail,” said Roger. “Texts don’t register as delivered. And the police have had no luck tracking it.”

There was a knock on the door. Roger got up to answer it.

I lowered my voice and looked at the cold eyes under the chestnut bangs. “How long have you lived in Warroad?”

“Five years. We moved up from Minneapolis so Roger could start NorthTech.”

Roger opened the door. A tall man, nearly forty with blond hair and a boyish face, stood in a navy-blue suit he couldn’t break the habit of wearing.

“Of course. Please come in.”

“Roger and Anne,” I said, “this is Anders Ellegaard. He works with me.” I would have said works for me, but that’s not how it is. If anything, it’s the opposite. Before Ellegaard, I was on my own and worked out of my shitbox house and aged Volvo. But nine months ago, Ellegaard resigned from Edina PD and used his connections to secure start-up funding. Now we have an office downtown and a junior investigator and an assistant and, worst of all, a website. My life, as I knew it, went to hell the day Ellegaard leased us a copier. But I’m making a steady living for the first time, have health insurance, and an IRA. And Ellegaard doesn’t complain about me too often, so I try to keep my complaining about him to a minimum.

Roger and Anne said a grave but pleasant hello to Ellegaard, then Ellie asked if he and I could talk in private. The Engstroms made a fuss about stepping into the bedroom, but I insisted Ellie and I leave the suite. We did and walked down the hall lined with silver room service trays piled with mostly eaten breakfasts, empty coffee cups, and spent napkins.

When we were far from the Engstroms’ eavesdropping range, Ellegaard said, “Have you accepted the case?”

“Yeah.” He looked down, shook his head, then looked back up. “The other kid, Haley Housh, they just found her body in a cave along the Mississippi River.”

“It’s about to leak. Thought you’d want to know before deciding on the Engstrom case.”

“Anybody else in that cave?”

“No. St. Paul PD’s forensics people are setting up now to comb through it.” Ellegaard and I stood in silence for a full minute. Then he said, “Too tragic.” I thought he might cry. “I don’t know, Shap. Maybe we should leave Linnea Engstrom to the police.”

“Hey, I have three daughters. I can imagine all too well what the Engstroms are going through. But this smells like a runaway to me. If the kid doesn’t want to be found, it will be hard to find her. Mostly likely, she’ll come back when she’s ready.”

“Or she’s dead like Haley Housh. Or has been raped. Or drugged and kidnapped into trafficking.”

“Don’t do this, Shap. Don’t make it seem like I don’t care about a seventeen-year-old girl. That’s malarkey and you know it.”

“Don’t say malarkey. That’s not a word anymore.” Ellegaard never swore. Or drank. Or jaywalked. He looked uneasy. I said, “You want to stick me on BrainiAcme.”

I looked up at Ellegaard’s blue eyes—they weren’t ice blue or gray like Anne’s—they were blue like a baby’s. The goodness in his veins must have preserved them that way. When he was a cop he could always be the good guy. You would’ve never seen him on YouTube abusing his power. He wore a gold shield that protected his moral code. Now he wore a businessman’s getup, and his code was exposed and vulnerable. He needed me to help defend it. “Give me a week on this, Ellie. If Linnea doesn’t turn up by then, I’ll work the BrainiAcme case.”

A maid pushed a cart of towels and toiletries toward us. We stepped aside so she could pass, and I helped myself to a sewing kit. You never know when you’ll need one.

I smiled at the tall man in the navy-blue suit, not because I had a gut feeling about Linnea Engstrom, but because Ellegaard asked for it.