June 22, 2020
Discussed in an ESPN 30 for 30 and portrayed recently in Tarantino's Once Upon A Time... In Hollywood, Bruce Lee is still a crucial part of pop culture. Join Brian Greene for a look at Bruce's film career and a chat about 5 of his most notable films included in Criterion Collection's Bruce Lee: His Greatest Hits, set to release in July.

When I watched Be Water, ESPN’s new 30 for 30 documentary on the life of legendary martial arts master and actor Bruce Lee (1940-73), I kept waiting for the topic of Quentin Tarantino’s portrayal of Lee in Once Upon a Time in Hollywood to come up. I figured it might get mentioned by Bruce’s daughter Shannon Lee (born 1969), who speaks about her father through many parts of the biopic and who has been vocal about the disgust she feels over her dad being shown as a blowhard who’s not actually much of a fighter in the 2019 movie. But the subject never arises in the documentary. 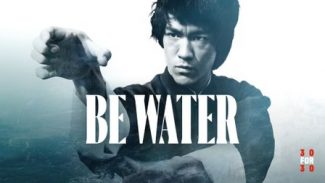 If Bruce Lee had been alive to see OUATIH, witnessing the character representing him getting shown up by a white American stuntman character might have brought back stinging memories of feeling slighted by Caucasians. Lee, who was born in America but whose family returned to their native Hong Kong when he was at a young age, came back to the States on his own in the early 1960s. After studying at the University of Washington and opening a martial arts school in Oakland, he (who had done some work as a child actor in Hong Kong) got into the screen business in the U.S. when he was handpicked to play Kato, the Kung Fu-practicing sidekick of the superhero in the short-lived TV series The Green Hornet (1966-7). That show, and its early cancellation, started what was ultimately a discouraging attempt for Lee to make a name for himself as an actor in the U.S. The big blow, as discussed in Be Water, finally came when a TV show that he largely developed, about a martial arts practitioner of Chinese descent who wanders in old West America, became the series Kung Fu (1972-5) and starred a white actor, David Carradine, when Lee had always seen himself in that role.

With Hollywood and American television seemingly closed off to the idea of an Asian American becoming a leading man in film and TV shows made primarily for U.S. audiences, Lee went back to Hong Kong and starred in a series of homegrown martial arts action films. There and then, he found his place as an actor. The Hong Kong Bruce Lee movies from the early ’70s were wildly popular and were huge money-makers. Lee found the movie star status that had coldly eluded him in white-dominated America. All of this led to the international production movie that was the perfect culmination of Lee’s life as both an actor and martial arts hero: the revered 1973 classic Enter the Dragon.

Besides the 2019 Tarantino film and the ESPN documentary, something else that makes Bruce Lee timely now is Bruce Lee: His Greatest Hits, the five-film collector’s boxed set of his movies being released by Criterion Collection in mid-July. The Criterion package brings together the three action films Lee made exclusively for a Hong Kong production company, as well as Enter the Dragon and Lee’s project Game of Death, which was left unfinished at the time of his young and shocking death in ’73, but later completed. Some discussion of those five movies: 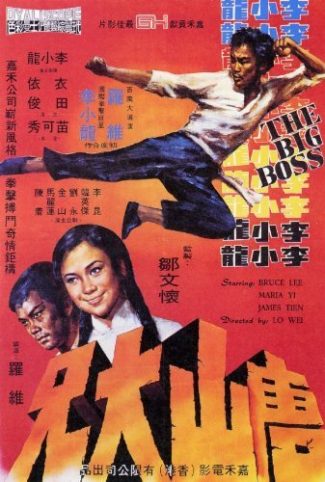 The first of the Honk Kong film productions Lee starred in after all the letdowns in his acting career in America. Set and shot in Thailand, the story features Lee as Cheng, a Chinese guy who moves to Thailand to live with his adopted family and work as a laborer in an ice factory. Cheng has mad martial arts skills (natch) but he swore to his mother that he wouldn’t engage in fights in Thailand. Problem is, every five minutes he runs into somebody who needs a beatdown, whether it’s roving thugs who pick on defenseless innocents or the unsavory, corrupt brass at the ice factory. He’s forced to choose whether to stand around and watch people he cares about get brutalized, or start fighting for them, and for himself. Guess what he opts for. This is a simple story, but it’s an excellent action film that includes drug smuggling and gambling dens, sweet love and steamy sex, a drunk Bruce lee scene, far-out soundtrack sounds by The Peter Thomas Orchestra, and many action-rich martial arts fights. This title was a massive commercial and popular success, and it made Lee a star in his family’s home turf. 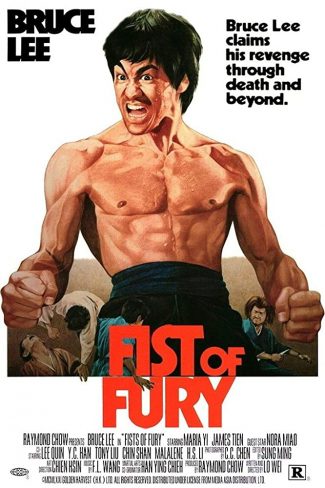 The follow-up to The Big Boss only cemented Lee’s status as a viable leading man of action/suspense movies, and one of Hong Kong’s biggest film stars of the day. This one’s a historical thriller with a revenge theme. Lee is Chen, a fiery-tempered student of a Chinese martial arts school in the settlement territory of Shanghai during the early part of the 20th century. When a group of Japanese imperialists from a rival school murder Chen’s beloved instructor and make it known they mean to run the Chinese institution to the ground, somebody has to fight back. Chen separates himself from his comparatively cautious schoolmates and becomes a disguise-happy vigilante who will take on the Japanese baddies by himself. Many of the supporting actors from The Big Boss reappear here, and all ultimately give way to Lee, who comes across as having been made to be a cinematic luminary. Fist of Fury’s script is nothing terribly original or memorable, but the film moves quickly and is heavy on intensity and excitement. It gave Lee an opportunity to showcase his fierce cultural pride on film. It was another big winner at the box office and with audiences. 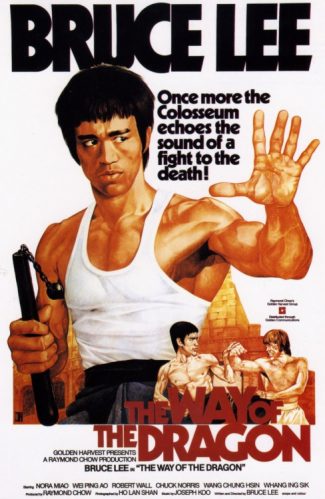 Lee parlayed his Hong Kong movie stardom into creating this new film that he wrote and directed, and in which he, naturally, starred. He is Tang, a guy from Hong Kong who gets called to Rome to help relatives whose restaurant business is being threatened by local mobsters, who want to force them to give up the property. Tang, a specialist in Chinese fighting, first has to prove to the staff at the restaurant, who practice Japanese karate, that his particular form of martial arts is worthy. Once he wins them over, he turns his attention to protecting the family restaurant from the vicious mob. Lee injected some lighthearted humor into this script, giving the title a cartoony feel that separates it from the previous two films. The comic touches don’t work really, and overall this feature is a notch below The Big Boss and Fist of Fury, quality-wise. But what makes The Way of the Dragon a keeper is Lee’s convincing intensity in the more serious scenes, the endearing acting of leading lady Nora Miao, and the epic martial arts battle between Lee’s character and one played by Chuck Norris. 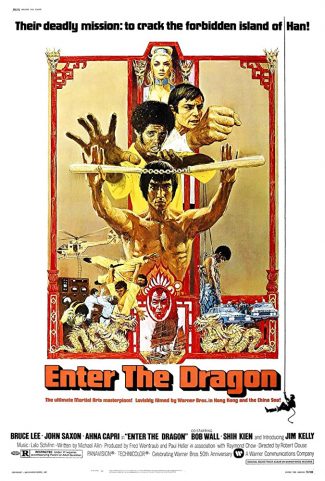 With word spreading about the financial and popular success of Lee’s Hong Kong-produced films, it was inevitable that parties from the international movie-making world, and specifically within Hollywood, would want to get in on the action. Enter Warner Bros. International and a couple of American film producers, and the end result became a co-production between Warners and Golden Harvest, the Hong Kong outfit behind the three titles discussed above. Lee’s powerful screen presence was at it most evident in a story that finds him as a martial arts master who is sent into a corruption-riddled Shaolin monastery run by a diabolical man who uses the island fortress as the headquarters of a drug- and people-trafficking ring. Lee’s character has a personal vendetta to settle on the island, as well, as he learns the ruthless henchman of the crime lord was responsible for the death of his sister. The focal point of the story becomes a fighting tournament held on the island. An exotic soundtrack by Lalo Schifrin, some Blaxploitation elements, opportunities for Lee to work in his life and fighting philosophies, scintillating sexual moments, gripping suspense, memorable psychedelic shots, a supremely hate-worthy villain, intensity and action throughout . . . this is easily the best film in the Criterion boxed set, and it’s the defining moment of Bruce Lee’s acting career. That Lee suddenly died shortly before the film opened in theaters, is a tragedy. 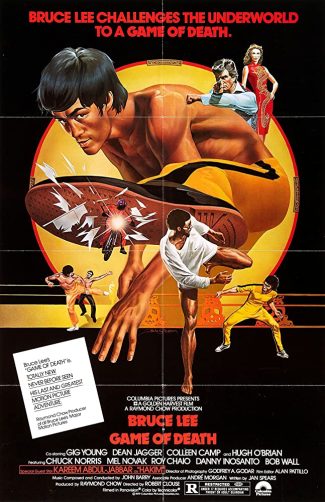 Lee had plans for another feature, a la The Way of the Dragon, which would have him as writer, director, and lead actor. He was already well into the creation of this project when shooting on Enter the Dragon pulled him away. With his untimely death, the new movie was left unfinished. But Golden Harvest brought in Enter the Dragon director Robert Clouse to complete the feature, using stand-ins as Lee’s character in the new footage, and a full-length film was created and released five years after Lee’s death. Lee (and the stand-ins) portray an actor who plays martial arts fighters in films, who has to use his fighting skills in his actual life when a syndicate wants to control his career and he refuses their heavy-handed offer. Kudos to Golden Harvest, producer Raymond Chow, and Clouse for making use of Lee’s incomplete film and turning it into a better-than-average action thriller (and one with winning aspects of having Kareem Abdul-Jabbar in an acting role and a John Barry soundtrack), but this title is not up to the level of the above-discussed titles.

So was Bruce Lee closer to the all-talk-and-no-walk loudmouth jerk he’s shown to be in Once Upon a Time in Hollywood, or the fierce fighter and conscientious human being we see depicted in Be Water? Chances are, he had some of each in him. Personally, though, I lean towards believing he was more of the latter. Regardless of how well he could actually fight, though, or how likeable he was in everyday life, what the Criterion set plainly shows is that Lee was a natural as a leading man in action films.