Brad Meltzer is best known for his thrillers that incorporate historical facts and politics but now he’s taking a swerve in his career path, branching out into children’s books with the January releases of I Am Abraham Lincoln and I Am Amelia Earhart, illustrated by Christopher Eliopoulous.

“I made this for the three most important people in my life and that’s my three kids,” the South Florida resident said. “I was tired of watching my children see reality TV stars and loud mouthed athletes as heroes. That’s fame, and fame is different than being a hero. I wanted to give them real heroes who are based on real people like them.”

The books start with the childhood of the historical figures and follows them into adulthood, although the drawing of the main character stays in child form the whole time. Meltzer creates beautiful parallels between the stories of their early lives and their great deeds, such as showing how Lincoln standing up to bullies as a kid prepared him to fight reject slavery and sign the Emancipation Proclamation.

Meltzer said his daughter wasn’t impressed when he told her Earhart flew across the Atlantic, because so does everybody else, but she was excited to learn that a young Earhart built a roller coaster on her barn and few through the air. “One of the most important ways you change someone’s mind is you tell them a story,” Meltzer said. “And when you show them someone like them and how they changed the world you can’t underestimate the power of that.”

The next figures that will be featured in the Ordinary People Change the World series are Rosa Parks and Albert Einstein, coming in June and September, respectively.

When his younger son was bullied at school, his older son told his brother to be like Rosa Parks and stand up to that bully. “That’s one of the best things I can do as a father is have my children convinced that this woman matters,” Meltzer said. “Of all my books, this series has been the least about a business proposition. These books are my heart in book form.”

Brian Bandell is a senior reporter at the South Florida Business Journal and the author of the science fiction thriller Mute from Silver Leaf Books. His viral murder thriller Famous After Death is planned for release in late 2014. 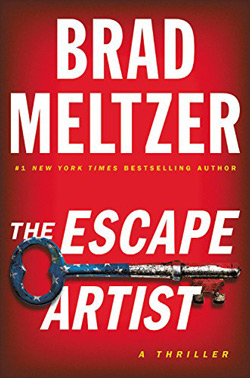 In The Escape Artist by Brad Meltzer, a mortician for fallen soldiers becomes an unlikely hero as he helps a young woman from his past battle a murderous organization. Brad Meltzer has returned to his roots as a thriller author in The Escape Artist, a fast-paced novel with protagonists who are easy to root for as…

Every Wednesday, we here at Criminal Element will put together a list of Staff Picks of the books that published the day before—sharing the ones that we are looking forward to reading the most! This week, Phillip Margolin's first in a new legal thriller series highlights an incredible week of books! See what else we're reading: