March 25, 2020
Mariah Fredericks stops by this week to share insights from her Jane Prescott historical mystery series set in the Gilded Age of NYC. Read on for Mariah's introduction to the series.

For the rest of March, you can get the eBook of A Death of No Importance, the first book in the series, for only $2.99. 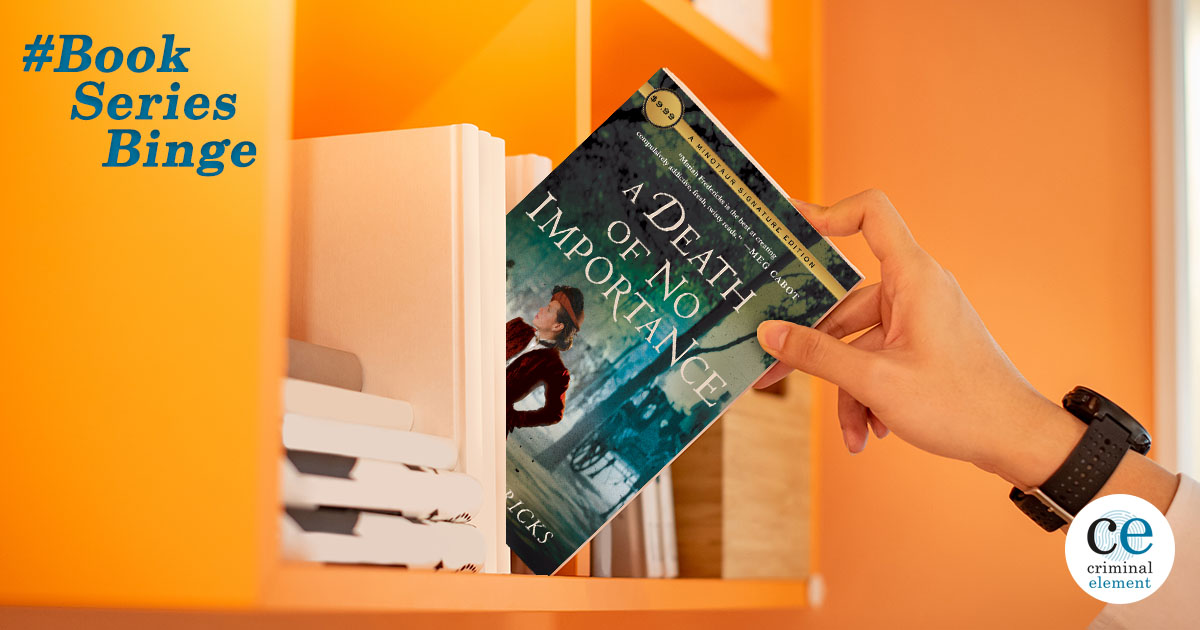 Describe the first time you pictured Jane in your head?

Mariah Fredericks: I heard Jane before I saw her. She just started talking to me. She had a very compelling voice and it quickly became clear she had a great story to tell: the truth about a long ago “Crime of the Century.” I knew a few things about her physically, she was medium height, not a large presence; as a lady’s maid, she should be unobtrusive. Her hair has a bit of a curl to it; I think it’s brown, certainly not blond, red, or black. She has large gray eyes and a smile that can be unexpectedly mischievous. I have an actress in mind, but I won’t name her. Everyone should decide for themselves what Jane looks like.

Would you like to live in the setting you created for your series?

MF: In some ways, I feel like I am living in it. I live in New York City at a time of vast differences in wealth. We are intensely divided: native vs. immigrant, men and women, owner vs. worker. The percentage of Americans born elsewhere is only slightly lower now than it was in the Gilded Age. And it was a very violent time; many Americans believed in the power of a gun or a bomb. Gun violence plagues us still, and increasingly, people are losing faith in the value of compromise. We’re even reliving the 1918 pandemic—although hopefully, we’ve learned something since then.

How has Jane changed since you began the series?

MF: In book one, Jane is leaving her job with an old-money family to work for a new money family. She feels very fortunate to have a job and as a sympathetic and loyal person, she feels invested in the Benchley family fortunes. Their success is her success. She’s an intelligent, perceptive woman of great wit, but she is a model servant. Her friend Anna, an anarchist, cannot understand her fondness for the upper classes at all.

In the second book, Jane has two moments where she sees that her loyalty and respect for her employers—or their class—is not reciprocated. Her privacy is violated. A fellow servant’s death is met with callousness. She starts to wonder if her future could be different—should be different. In book three, she’s on vacation, exploring the city and “in service to absolutely no one but myself.” We’ll see where that journey takes her, but she’s definitely become more independent-minded.

An Introduction from the Author

With these words, Jane Prescott introduced herself to me more than a decade ago. I was in the middle of writing another book, so I thought, If this lady doesn’t tell me what she has to say, she can just vanish back into the character ether. But . . . she persisted. This woman had a secret she had kept for more than a hundred years, and she wasn’t going away until I wrote down the whole story.

I knew a few things about Jane Prescott from the beginning. She was tactful, which hinted at a career where tact was essential. She was not contemporary; her tone was too careful, too precise, for modern times. But she didn’t exist in the mists of the distant past; this was a twentieth-century woman.

But not a famous woman and not a wealthy woman. I don’t believe in past lives, but if I have lived before, it wasn’t as a great artist or a queen or a celebrated mistress. Other people might have been Cleopatra, I would have been the asp wrangler. A foot soldier for Napoleon, script girl at the Globe. This isn’t metaphysical modesty; I’ve always been fascinated by what servants see and hear. And as I thought about Jane’s story, I very much liked the idea that one of these “ little people” from the past would know the truth about a famous crime, precisely because nobody noticed them.

When in the past—that was an issue. I needed a time when servants were common. But I also wanted a time of change, where mobility was possible even for women without vast financial resources. And I wanted a period that would reflect some of our modern anxieties. That brought me to Gilded Age America. Then as now, there was enormous inequality. Immigration meant that labor was cheap—almost disposable. Labor was starting to fight back, at times violently. Two presidents were assassinated during the Gilded Age. In one of the key events of A Death of No Importance, the Los Angeles Times Building is bombed. At his trial, one of the bomb-ers, J. B. McNamara, said, “You see? The whole damn world be-lieves in dynamite.” An era of dynamite and diamonds felt like the perfect era to start Jane’s story.
There was never a question of where I would set Jane’s story.

I have lived all my life in New York City, and I still walk the city like a tourist, fascinated by the energy, the personalities, and the history. My childhood neighborhood has been taken over by Rite Aids and Starbucks. But if you go to my old building on Eighty-fourth Street, you’ll see the plaque that commemorates Edgar Allan Poe’s creation of “The Raven” on that site. Writing this series has taken me to what’s left of the Five Points (not much) to the grand mansions of Fifth Avenue to the last ungentrified bits of Little Italy and Chinatown. It’s wonderful to look up at a handsome old building and think, Jane might have been there. Or an ugly new one and think, Oh, she would have hated that.

Ultimately, these are Jane Prescott’s stories. I’m just the typist. I hope you enjoy spending time with her as much as I do.

**Deal Alert: For March only, get the eBook of A Death of No Importance (Book 1, Jane Prescott series) for $2.99

Get A Death of No Importance right here or from any of the retailers below.

Doreen Sheridan’s Review of A Death of No Importance

Review of A Death of a New American by Angie Barry