Book Series Binge: Introduction from The Right Sort of Man by Allison Montclair

March 20, 2020
As the world gets used to social distancing and working from home, we thought it’d be a good time to highlight and introduce our readers to some of our favorite authors and series. If there was ever a time to binge read a new series, it’s now. So tune back regularly for new suggestions, eBook deals, and author Q&As. Today, we’re kicking things off with author Allison Montclair's introduction to the Sparks and Bainbridge mystery series, which starts off with The Right Sort of Man. 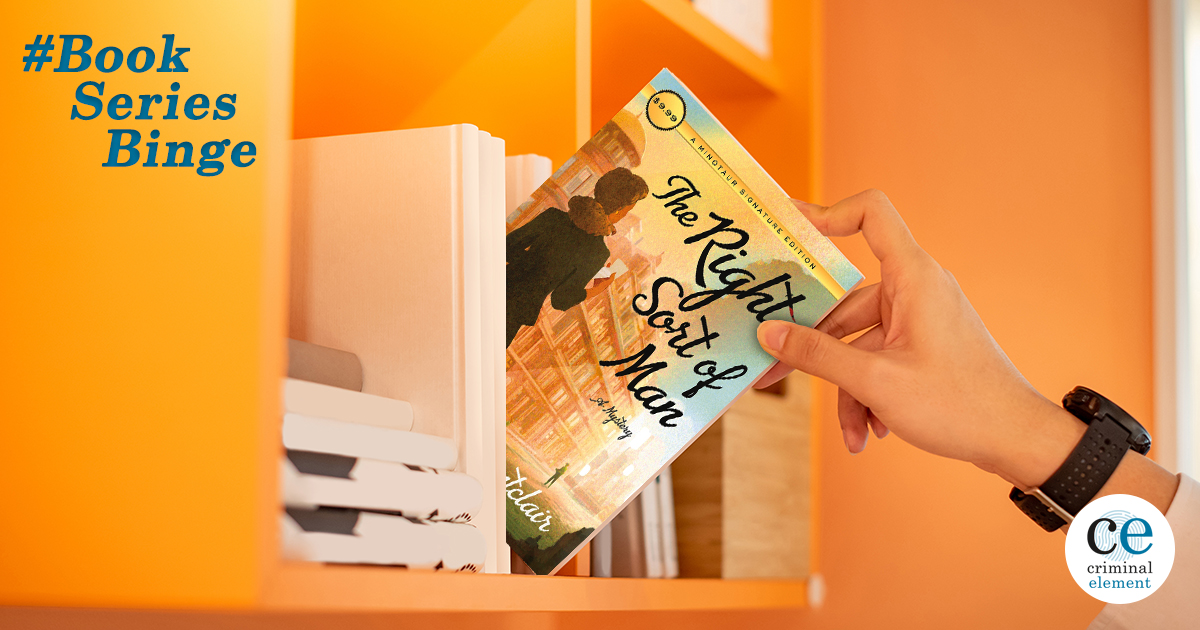 There is a technique that will supposedly trigger creativity in a writer. It is a list of words and phrases used as random prompts. Take the next one on the list, and use it like an electric cattle prod to goad your muse into action. (I can speak from personal experience that the word tequila is not a helpful prompt, although to this day I have only the fuzziest recollection of how I learned that. But trust me on that one.)

A more professional and constructive prompt came from Keith Kahla, my editor supreme at Minotaur Books. He invited me to lunch out of the blue and I, trusting soul that I am, readily agreed, happy at the prospect of catching up with him. I am a devious, cunning, and occasionally murderous person when I write, but blissfully oblivious when it comes to the machinations of others, especially when they are offering to feed me.

Sure enough, after pleasantries were exchanged, family histories were updated, and carbs were consumed, Keith said, “So, I’ve just read a book about a marriage bureau in London that was started up and run by two women in 1939. I thought it might be an interesting setting for a mystery, and I thought you’d be good for it.”

And we were off and running. Iris and Gwen sprang into my mind fully formed on the ride home and immediately began talking to each other (Iris more rapidly). This was a good sign. I once heard an interview with the great Elmore Leonard in which he said that he couldn’t start writing for a character until he knew what its name was. For me, it’s the voices, the speech patterns, that drive them in my mind. When they are fully formed, the voices will tell me about their needs, their desires, the pasts they reveal, and the pasts they conceal. When it’s going well, it feels less like writing and more like I am listening and recording what they are saying. If pressed, I would say that Iris’s voice was derived from the young Glynis Johns with a touch of the more madcap Katharine Hepburn, while Gwen is more Madeleine Carroll—only taller.

I moved the setting to the postwar period for various reasons, the principal one being that I did not want to write a wartime novel with our intrepid heroines sneaking around after curfew, tiptoeing through the bombs, and so forth. Postwar London was a fascinating place. The city was recovering from the Blitz; a Labour government had taken over with Clement Attlee succeeding Churchill as prime minister; rationing was still in effect; a young princess was being courted by the man she would eventually marry; and the Cold War, the nuclear age, and television were all set to change the world as they knew it.

And it was a fascinating time to be a woman. Women had been given opportunities in wartime that they would not have had otherwise. They took their places in factories, filled every administrative post that didn’t involve combat, broke codes at Bletchley Park, parachuted behind enemy lines as spies, commanded anti-aircraft batteries, and died by the hundreds in transport ships sunk by enemy submarines. The postwar demobilization drove many of them back to a prewar existence, ceding their newfound positions and skills to the lads coming home—but not all of them, and many seeds were planted that would change their roles in British society.

Fortunately, there is ample documentation of these changes available to the modern researcher. I am of the generation that used microfilm readers, and this dormant skill was revived as I spooled through The Times of London, scanning the daily events for each month I was recreating (a speedier process than you would expect, as newsprint rationing restricted the daily papers to eight to ten pages). Both stories and adverts were mined. Newsreel footage from the period is accessible on the internet, and of course, there are books. Of particular use were the oral histories of life in the Blitz compiled by the Mass Observation Project, and by Anne de Courcy, whose interviews with women in 1939: The Last Season and Debs at War were a gold mine of information. Perhaps my greatest discovery was a reproduction of the London bus and tram route map for 1946, available for a small fee. (Thanks again, internet!)

To be a historical fiction writer is to live in terror. People are fiercely possessive of their slices of history. There are tiny little fiefdoms over which obscure academic wars are being forever waged. Pick the smallest plot of dirt you can find on the globe and the smallest sliver of time it passes through, and you will find that you have stumbled into several competing dissertations, and all of these people know far more about the subject than you do, unless you happen to be one of these current or future PhDs who dabbles in fiction writing on the side.

I am not an academic, thank goodness. I once attended a history conference that had the very democratic thought of including both academic and popular topics. Imagine middle-aged scholars of the Middle Ages milling about with fans of Middle-earth, and you’ll have the general idea. I had to present a paper on a topic related to a book I was working on, and I was quite nervous, figuring that I was going to be surrounded by people who spoke Old English and Ecclesiastical Latin at the table. I was sitting in the communal lunch-room opposite an intense young woman, bemoaning my trepidation over trying to sound knowledgeable in front of people who actually were, and she glared at me and snapped, “Well, at least your career doesn’t depend on it.”

Well, yes and no. I may not be an academic, but I feel I have an obligation as a creator of worlds to Get Things Right. And that’s what I enjoy about writing historical fiction. I have, as Douglas Adams once wrote, “endless fun doing the little fiddly bits around the fjords.” I come across countless obscure nuggets of information or long-discarded bits of slang that have triggered plot points, moments of dialogue, or random thoughts for the characters.

I am, as of this writing, five-eighths of the way through Book Three of the adventures of Sparks and Bainbridge, still happily ensconced in 1946. I hope to get to 1947 soon. And in 1948 comes the London Olympics. There’s bound to be some trouble there. We shall see.

Until then, thank you for reading.

Order Your Copy of The Right Sort of Man

A Rogue’s Company, set in 1946 London, is the third and last Sparks and Bainbridge mystery. Readers will be sad to say farewell to this clever series, which shifts seamlessly from Mayfair to the London docks. Londoners grieve their personal losses post World War II, but they are resilient, embodying the motto “keep calm and… 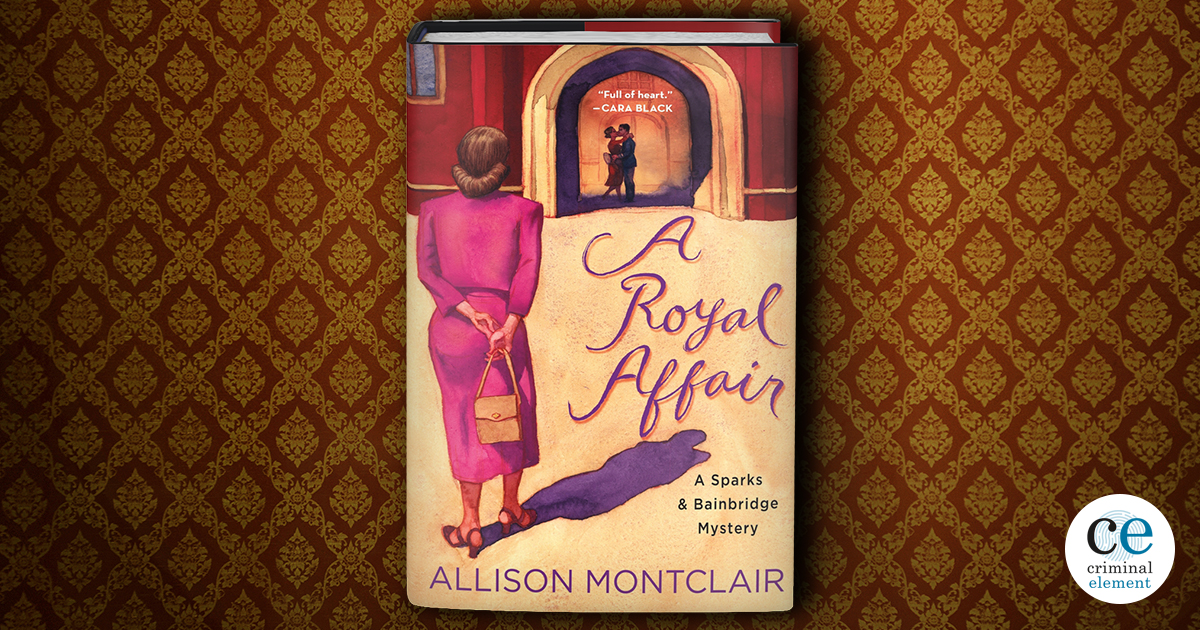 Miss Iris Sparks (Cambridge grad and serial fiancée) and Mrs. Gwendolyn Bainbridge (former debutante, widow, related to the Royals) opened The Right Sort Marriage Bureau, in 1946. They hit it off at the wedding of George and Emily Bascombe, where Gwen was the “match-maker,” for the seemingly mismatched couple and Iris, at the behest of…

Book Series Binge: Introduction from The Widows by Jess Montgomery

Kinship. Most simply, Kinship is the name I assigned to the county seat at the heart of fictional Bronwyn County in which Lily Ross— inspired by Maude Collins, Ohio’s true first female county sheriff in 1925—investigates the murder of her husband. But just as Kinship is the heart of the beautiful yet challenging Appalachian county…