Book Review: You Let Me In by Camilla Bruce 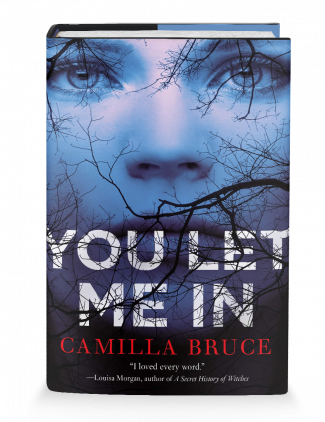 You Let Me In

You Let Me In delivers a stunning tale from debut author Camilla Bruce, combining a sinister domestic atmosphere with otherwordly thrills.

You Let Me In by Norwegian writer Camilla Bruce is a mixed genre novel that will grab you by the throat and not let you go. This “modern fairy tale” is in the tradition of the original Grimm Brothers’ tales, not the sanitized and sweetened Disney versions. All fairy tales have their time and place, and Bruce’s tale is one for our time of heightened awareness of violence against girls and women.

The description on the back of the book makes it sound like a straight forward crime novel. Cassandra Tipp is a best-selling romance writer of forty-two novels who has disappeared, leaving behind not only her fortune but a past filled with dead bodies. Her husband was murdered. Years later her brother and father died in an apparent murder-suicide. Cassie leaves behind a final manuscript, one intended for her potential heirs to read as part of their acceptance of the inheritance she is offering.

This manuscript is Cassie’s story, which she has never told. Well, not directly. Her therapist, Dr. Martin, wrote a book based on her case, Away with the Fairies: A Study of Trauma-Induced Psychosis. The book was a best-seller, but it told a story that not everyone welcomed.

As Cassie writes to her heirs, “Your mother and grandparents were not pleased by this book, I can tell you that. Dr. Martin’s star crashed landed in a pile of shit in their front yard, stinking up the whole neighborhood.”

Dr. Martin’s book is referred to again and again in the novel. It is a touchstone for one version of Cassie’s story.

Cassie’s parents prefer everything in order, to look pretty and perfect. Their three children were to be reflections themselves. Before Cassie is born her father was a boxer, “His body was fit then; hard muscles and slick skin.” Her mother was “perky and young, nothing but lips and tits.” After they start having kids, the father becomes a salesman and the mother a homemaker. Their house is perfect. Their two daughters have their own bedrooms with white carpets and bookshelves. The son is sent to boarding school.

But all is not right with their daughter Cassie. She is the opposite of her perfect younger sister. Cassie becomes the town freak. The girl that everyone laughs at because she talks to herself. But Cassie isn’t talking to herself. She’s talking to Pepper-Man, the ancient Faerie who claims Cassie as a toddler. He is ugly and wonders what her eyes would taste like, “how it would feel to have them slip down his throat.” Her relationship with Pepper-Man is sexual and vampiric. He feeds on her at night. She comes to love him. “It’s a predatory world out there. We all eat something, don’t we?”

This story is a deep dive into the mind of a child and woman. The Faerie world is dark, dangerous, and seems more real than the immaculate homes and well-tended lawns of suburbia or the logical world of Dr. Martin.

You Let Me In is a dark Gothic thriller, one that will appeal to a diverse group of readers who are hungry for something new. Cassie’s voice is unwavering and Bruce’s writing is propulsive. She effortlessly slips from mystery to memoir to supernatural horror to domestic drama. Without a doubt, this is one of the most imaginative and compelling books of the year.

What Cassie writes to her would-be heirs about being a best-selling author is exactly what Bruce has done with her first novel:

Mostly, though, it was habit that made my readers come back. They do that, you know, if you tell a good story. They crave more of that same feeling you gave them, want to immerse themselves in your waters again, swim deep in your lagoons and drink from that well.

I can’t wait to swim in Bruce’s waters again. Luckily, her second novel — In The Garden of Spite — is already queued up for 2021.