Book Review: You Are Not Alone by Greer Hendricks & Sarah Pekkanen

March 3, 2020
You Are Not Alone by dynamic writing duo Greer Hendricks & Sarah Pekkanen—the electrifying #1 New York Times bestselling authors of The Wife Between Us and An Anonymous Girl—is a brand new novel of psychological suspense. 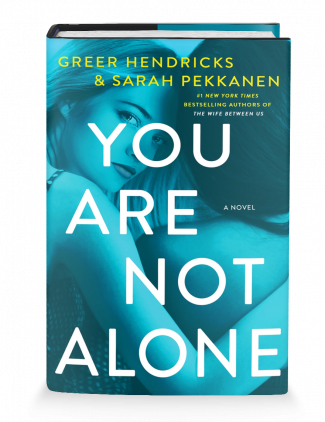 You Are Not Alone

While it would be easy to attribute the success of Greer Hendricks and Sarah Pekkanen to the dynamism of their creative collaboration, that would diminish their individual accomplishments. Hendricks earned a master’s degree in journalism from Columbia University, has contributed to the New York Times, Publishers Weekly, and Allure, and spent more than twenty years as an editor at Simon & Schuster. Pekkanen is a former investigative reporter and features writer who has been published in the Washington Post and other reputable outlets and achieved USA Today and internationally bestselling status with eight solo novels. Together, they have drawn on their experiences to write the runaway New York Times bestsellers The Wife Between Us and An Anonymous Girl, both of which are in development for the screen. March’s You Are Not Alone is their third joint offering.

Read More: CrimeHQ Reviews The Wife Between Us

As the story opens, thirty-one-year-old temp worker/data analyst Shay Miller—a single New Yorker who has unwittingly become the third wheel in her roommate’s romantic relationship—has the misfortune of witnessing a stranger commit suicide by jumping in front of a subway train. Haunted by the emptiness she glimpsed in the woman’s eyes, and her inability to stop the act despite her proximity to it, Shay becomes preoccupied with the victim’s identity—ER nurse Amanda Evinger—and decides to pay her respects by attending a public memorial. This impulsive gesture necessitates meeting Amanda’s friends, including sisters Cassandra and Jane Moore, and fabricating a story about how she and Amanda were acquainted. But once the first lie is told others immediately follow.

On the surface, the Moore sisters are everything Shay wishes she could be—self-assured, sophisticated, stylish career women who have cultivated a small circle of female friends. So when they begin lavishing attention and presents on her, she’s too flattered to question their motives. Soon, Shay’s got a new look, a new job, a new apartment, a new romantic suitor. . . and a gnawing suspicion that something’s not quite right. The more Shay’s life begins to mirror Amanda’s, the more she loses her sense of self. It’s only after things take a dramatic turn (hello, NYPD!) that she begins to reconsider her association with the sisters in earnest. Are they simply being supportive of her ambitions or are they setting her up? And, if so, for what? Shay will have to go on the offensive if she wants to clear her name—and, quite possibly, save her life.

Take a Visual Tour of You Are Not Alone with GIFnotes!

As with their previous novels, the authors shift viewpoints and timeframes frenetically throughout the narrative, effectively keeping readers off-balance while proffering bits of backstory that eventually reveal a whole, and wholly disturbing, picture. The segments featuring Amanda are particularly powerful, as they juxtapose her initial promise with her ultimate demise. Taken in conjunction with Shay’s account of her own peril (which includes relevant statistical extracts from her Data Books), you can’t help wondering if they’ll share the same fate—a lingering question that drives the plot forward. The Moores (and their carefully chosen girlfriends) have histories and obsessions, too, and it’s their unraveling will lead to the inevitable downfall. But whose?

You Are Not Alone is a seductive mind-bender of a story in which everybody’s primary MO is manipulation—including the authors’. In a world where conformity breeds caution, this book serves as a reminder that friendship and fitting in can be entirely different things. It’s funny—but perhaps fitting—that somebody with an affinity for numbers (like Shay) would forget this simple probability: If it seems too good to be true, it most likely is. Fortunately for readers, Greer Hendricks and Sarah Pekkanen appear to be an exception to the rule.