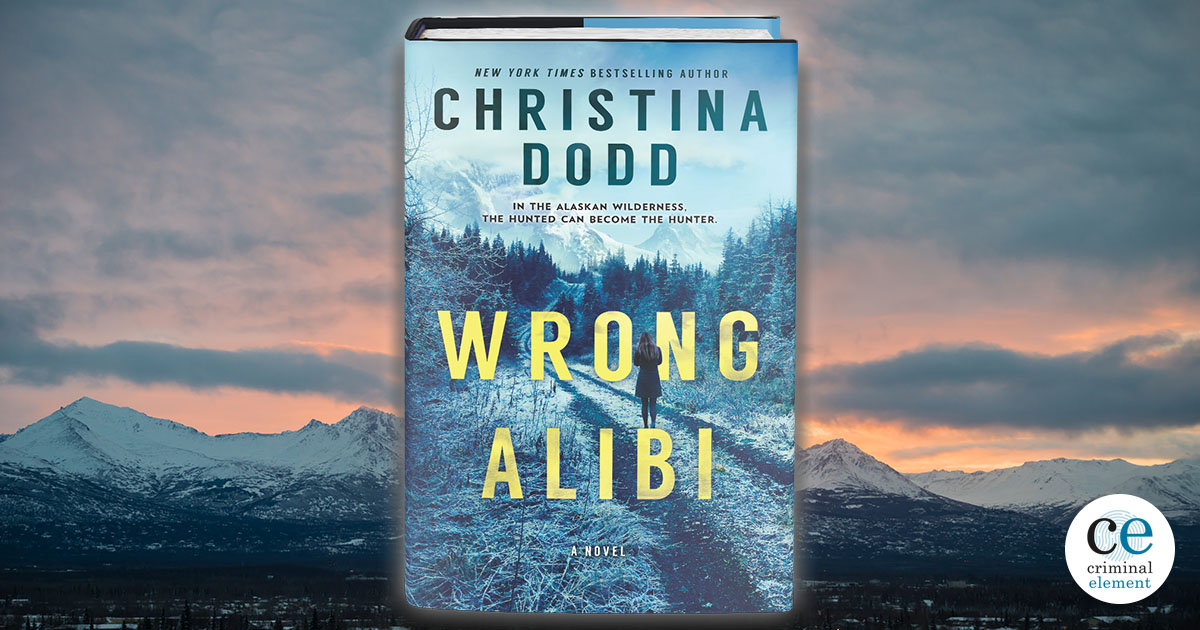 Wrong Alibi has a Perils of Pauline or Toad’s Wild Ride feel to it. Step up, step up: find out how Evie transforms herself from Too Stupid to Live to Too Smart to Lose. Everything is larger than life, starting with the location, Alaska. The villains are scarier, the heroism over the top, and the difficulties Evie faces profound: it’s a super-sized thriller.

Life hasn’t been easy for Evelyn (Evie) Jones. Before she accepted a too-good-to-be-true job in Alaska eight years ago, she went to high school in juvenile detention. Even there, Evie made the most of her opportunities, graduating with a GED “and trade school,” and some bookkeeping skills. Alaska seemed like a great place for a do-over but that’s not how things worked out. Donald White, her employer, left her holding-the-bag on “charges of theft, embezzlement—and a brutal double murder,” before he disappeared. She’s about to spend the rest of her life in prison since no one believes her plea of innocence.

As the trial had unfolded and evidence had been produced, Evie had been forced to realize how thoroughly Donald White had conned her.

She realized, too, she had lived with a man who had murdered a woman and a child, plotted his own disappearance and calculated Evie’s apparent guilt down to the last detail—without a shadow of remorse. She remembered those times when she’d said the wrong thing, and he’d moved close, and she thought now if she’d been smarter about him, he would have killed her, too.

Evie thinks, “Death would have been better than the courtroom, the jail.” Life is bleak. But wait…while puking in a fetid bathroom at the back of a prison bus, the bus started rocking and rolling: “Evie was thrown around that tiny compartment. Her face hit the toilet and her bones…broke.” Who could have foreseen that “the bus had been caught up in the soon-to-be famed Licking Mudslide?” A sympathetic plastic surgeon in Anchorage remakes Evie’s face in the aftermath of the accident: he knows she isn’t who she says she is, and he gives her a second chance, right before a press conference where she would have been exposed as a fraud.

Dr. VanHooser handed her a prepacked backpack and a wallet with money and told her to go to Hawley Foggo at the Midnight Sun Fishing Camp for a job. He said if she was willing to work for cheap, Hawley wasn’t too fussy about things like social security numbers or background checks.

That was the truth.

She got a job.

Life at an isolated Alaskan fishing camp is brutal. Things go wrong from the get-go: in the throes of white-out conditions Evie (now going by an alias, Petie) finds herself outside the compound. During the wind and turmoil, her mother Ioana’s last words to her ricochet. Ioana had told her sullen 14-year-old daughter, just before she went to juvie, to “repent” of her misdeeds, saying, “When you can make me proud, come home.” They argue, things get heated, her mother slaps her and then asks for forgiveness.

“Forgive me. But you’re throwing away all your opportunities with both hands. Stop. Think. Live!”

Apparently, her mother and the wind had something in common.

Evie is not a quitter. She figures out how to get the wonky generator up and running. Success! She wasn’t going to die here.

She said it out loud, needing to hear the words. “I am not going to die here.”

Someday, somehow she would leave the wilderness behind, mend the rift in her family, but most of all, she was going to find Donald White: conspirator, con man…killer.

She would have revenge—and he would face justice.

Evie is phenomenally bright and living alone for eight months of every year gives her endless time to learn. Languages. How business works. Investments. Research skills.

In her eight winters here, she’d watched movies, read books, and gained a working knowledge of Mandarin, Belarusian, Spanish, French, Quemadese and a little Latin. But not enough, and the online translator always screwed up with Latin. So she was grateful when she got to Early Modern English, to a monastery looted in Henry VIII’s reign. That monastery and the land surrounding it had been granted to one of Henry’s nobles; the Bible had been a point of pride until the family lost their fortune in the early twentieth century.

The family sold their asset and years later, “it had passed to one little old lady…from whom the Bible had been stolen. The little old lady, Miss Merchant, was Petie’s client, and she was fierce in her fury at the loss.” But Petie figures out “the culprit and the buyer,” and tells Miss Merchant where the exchange will take place. Christina Dodd shows, not tells, Evie’s formidable skills. She’s a crack researcher, and a savvy investor (through well-thought-out financial decisions plus judicious eavesdropping on uber rich clients). Evie has “risen up the Midnight Sun chain of command to become Hawley’s camp director.” Someone else meets guests at the camp’s airstrip now although she makes an exception for “Cardinal Electronics CEO Jeen Lee.”

Everything changes when Petie tells Miss Lee that her son, kidnapped when he was just four-years-old, is still alive. Jeen Lee is so taken aback that she physically threatens Petie. Mistake: Petie tells her, “Like you, I’ve lost everything.” Implicit in that bald statement is that if Lee kills Petie, she’ll never find her son.

“Shall we start again? I heard about your son’s kidnapping. I investigated. I found the woman who had been his nursemaid and had committed similar crimes with similar results. I went looking for your son.”

“Did you find him? Did you find Hugh?” Miss Lee allowed emotion into her choked voice, or maybe she couldn’t stop it.

It’s time for Petie to become Evie again—Katchabiggie Lodge was a refuge, giving her space and freedom to become a modern Valkyrie but with Miss Lee’s support, Evie is ready to “Cry havoc and let slip the dogs of war,” on Donald White. He will pay for what he did.

Wrong Alibi is a story of redemption and rebirth. Evelyn “Evie” Jones deserves her second chance at life; an opportunity to make amends, reconnect with her family, and find justice. I’m looking forward to the 2nd Murder in Alaska book: Evie is the complete package.