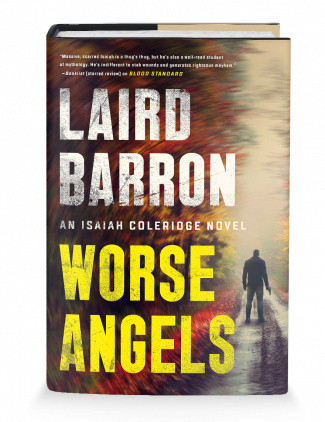 In the third Isaiah Coleridge novel from Laird Barron, Isaiah finds himself entangled with a rich and powerful cult while looking into a mysterious death and a shady real-estate deal worth billions.

There’s a secret to creating something great and then consistently making it even better, and Laird Barron possesses that arcane knowledge. With Worse Angels, the third book in his Isaiah Coleridge series, Barron has taken the mix of crime and horror that made the previous two books outstanding reads and pushed the envelope in terms of weirdness and darkness while retaining the flashes of top-notch writing that make his work the stuff of literary fiction’s nightmares.

Isaiah Coleridge is between jobs and still reeling from taking out a legendary serial killer when he gets a call from Badja Adeyemi, a rich, powerful man who’s hiding from equally powerful enemies and the authorities. Adeyemi knows killers and cops are coming for him, but before they get him, he wants to tie up all loose ends, so he hires Coleridge to look into the suspicious death of his nephew. The death, which took place in a shaft of a supercollider being built by shady companies, was deemed a suicide. But there was too much going on around the supercollider, and Adeyemi isn’t convinced. To get to the bottom of the man’s death, Coleridge and investigative partner Lionel head north to a small town in upstate New York that is packed with cults, dirty money, bad people, and the underground supercollider, which is full of dark secrets. The deeper Coleridge digs, the closer he gets to the core of something that’s not entirely of this world.

There are two things readers can count on when reading a Barron book: there will be a lot of action and the author will always keep one foot in cosmic horror. Both elements are present here. In fact, Barron simultaneously pushes against the boundaries of horror and crime fiction and creates narratives that crawl in the violent darkness of the interstitial space between both genres. His writing is full of characters with wicked intentions and guns, but also with creatures that shouldn’t be and forces from a different plane that have an impact on our frail reality.

While the core elements are exactly what readers have come to expect from Barron, the story itself is new and the writing is as fresh as always. Barron keeps finding ways of making Coleridge more nuanced, and in Worse Angels readers will find a slightly worried, older Coleridge worried about losing strength and worrying about the aftermath of the physical punishment he’s been subjected to throughout his career. Also, while dealing with his deteriorating physicality is a big thing, Coleridge also deals with a lifetime of psychological and emotional turmoil. Barron writes about it brilliantly:

The night after my graveside vigil was a humdinger. Guilt and residual brain damage make for an inadvisable combination. Add a fifth of eighty-proof and let the horror show commence. Routine nightmare mutated in new and disturbing directions. Achilles, companion dog of my bellicose youth, fell from a mountainside, as he had in the waking world, and dashed upon the rocks. Fire devoured a lush, subtropical forest. Extinct moa birds thundered around me, fleeing the inferno. Dad pursued child-me with an oar raised overhead. The sharp, chipped oar he’d struck Mother with and split her skull. His face boiled and dissolved into an inky well. Mom floated behind him in silhouette, arms spread, wailing like a banshee. Soundless, though. A slap in the face without the crack.

If the previous books contain some bizarre, dark characters, Worse Angels is full of monsters. The Mares, a cult made up of rich folks with peculiar interests and a nefarious plan that involves the supercollider, are the type of crew that devour putrefying meat, perform rituals in the darkness, and want to change reality via cosmic horrors brought forth by their efforts. Coleridge, who possesses an open mind and is as spiritual as they come, tries his best to deal with the shadowy group even when the things he sees and hears make no sense. Not surprisingly, the otherworldly nature of some of his new enemies doesn’t prevent him from using his best tool on them: violence. Most contemporary crime writers deal with violence, but few see it as a tool, and even fewer understand how natural it comes to some. Barron does:

Here’s something real: Don’t buy the jive about violence as a last resort because I’m better than that. No. Violence is only a last resort when it’s a last resort. Realistically, it’s often a first, second, or middle resort.

Fast-paced, atmospheric, and dark enough to satisfy fans of Barron’s previous work in horror, Worse Angels is a crime thriller with a heart full of black magic; a meaty novel full of creepy moments in which the threat of violence is constant. There is no need to read the previous two books to enjoy this one, but the way Coleridge’s character arc shifts will be best enjoyed by those familiar with his past. This is a cerebral narrative that dips its toes all the way up to its nose into mysterious events, humanity’s ties to darkness, and even conspiracy theories. More than a book, this is a Molotov cocktail in which horror is gasoline, crime is the bottle and the handkerchief, and Barron’s prose is the flame. Handle it carefully.