Book Review: The Woman in the Mirror by Rebecca James 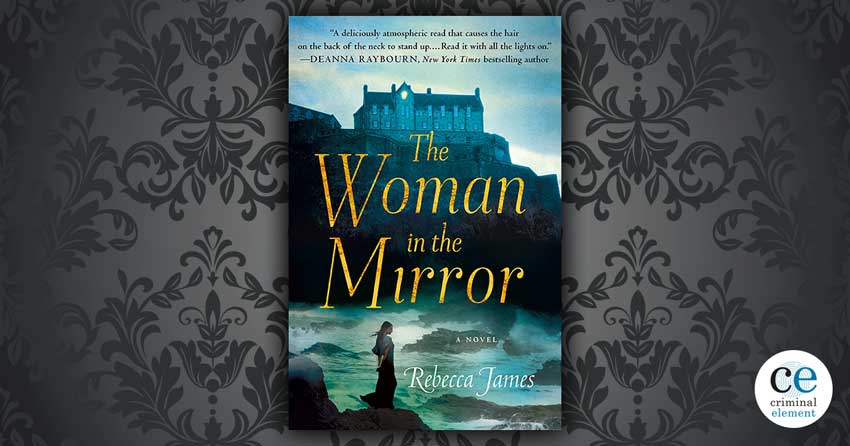 The Woman in the Mirror by Rebecca James is a chilling modern gothic novel, spanning multiple generations, of a family consumed by the shadows and secrets of its past.

Rebecca James certainly knows her horror stories! While reading The Woman in the Mirror, I kept nodding at the deft allusions to the works of her predecessors, from Daphne du Maurier to Charlotte Perkins Gilman to both of the other James, Henry and M.R. (and perhaps a hint of Catherine Storr). She mixes these influences with classic folk tales of vengeful revenants and supernatural legacies to create a truly creepy gothic thriller that spans centuries.

In Ms. James’s novel, a woman in early 19th-century Cornwall is accused of being a witch and curses the man who set her persecution in motion. Nearly 150 years later, that man’s ancestral home, Winterbourne, is inhabited by a small, damaged family. Captain Jonathan de Grey was horrifically maimed in the Second World War and now lives in near isolation with his young twin children, Edmund and Constance, for company. In the manner of all rich, withdrawn English fathers of a certain era, he advertises for a governess to oversee his children’s education.

Alice Miller sustained her own damage in the war and jumps at the chance to leave her stifling position in London—never mind her lack of teaching experience. That seems to matter for naught, however, as she and the children find each other utterly beguiling at first. She also finds herself increasingly attracted to Jonathan, ignoring the red flags regarding both his late wife and her immediate predecessor as governess. As Winterbourne gradually sinks its hooks into her, her affection for the family begins to take a turn for the obsessive.

All I knew was that I had to be privy to every part of the de Greys, to see what they saw, to know what they knew, to be inseparable from them in that way families are, all of us together, facing whichever adversity came our way. I wanted to be integral to them, for them to depend on me, to need me, to never doubt me nor I them. The children had appealed to me, and so had Jonathan. They had shown me how important I was and the significance of the role I filled. Right from the start when the twins had sketched me in a wedding dress—“You’d make a beautiful bride”—they had been communicating a yearning they were too young to understand. But I understood. It was my duty to return their devotion.

Fast forward to present-day New York City where Rachel Wright is basking in the successful opening of her art gallery even as she nurses hidden pain. Adopted as a baby, she knows she was fortunate to be lovingly raised by her adoptive parents but cannot help wondering who her birth mother is. Her investigations have only turned up that she was born across the Atlantic in Britain.

When she receives an unexpected letter informing her that she’s inherited an estate called Winterbourne, her skepticism wars with her desire to know more about the family that gave her up. Traveling to Cornwall, she finds a decrepit old house in desperate need of a good cleaning. Her boyfriend, Aaron Grewal, wants her to sell as quickly as possible and come home, but Rachel soon finds herself drawn to the building’s darkest corners—even when they unleash terrors.

Rachel gasped, staggered to her feet, the flashlight falling from her hands; it struck the floor and spun, coating the walls in light she was horrified to meet, and she stooped to grab it and then she ran. She ran up the little steps and along the servants’ corridor, every part of her shaking, hearing scurrying footsteps behind her but terrified to turn back, terrified, and she ran up, up, up to the main floor and then suddenly the bells were ringing, from nowhere, louder and louder and louder, chimes clamoring from the bell box on the wall, operated by some terrible, invisible hand, bells clattering this way and that like shrieking children caught in a fire. On and on they rang their ceaseless, deafening chime, ringing all around, above, below, just as the darkness had surrounded her, a terrible uproar, and still she heard that scampering at her heels like the paws of a ravenous animal—

Ms. James writes terrifically spooky, genuinely pulse-pounding prose as she slowly unravels the connection between Rachel and Alice. The suspenseful narrative shifts back and forth through time as each woman seeks to bring the dark mysteries of Winterbourne out to face the cleansing light of day. Along the way, Ms. James examines the way women have been treated as disposable objects by the men in their lives throughout history and how rage can transcend reason. There are twists aplenty as her heroines each deal with the challenges of their circumstances and an unexpected ending I’m still thinking about! The Woman in the Mirror is a must-read for lovers of gothic horror, giving the genre a modern update while paying loving tribute to the giants of its field.