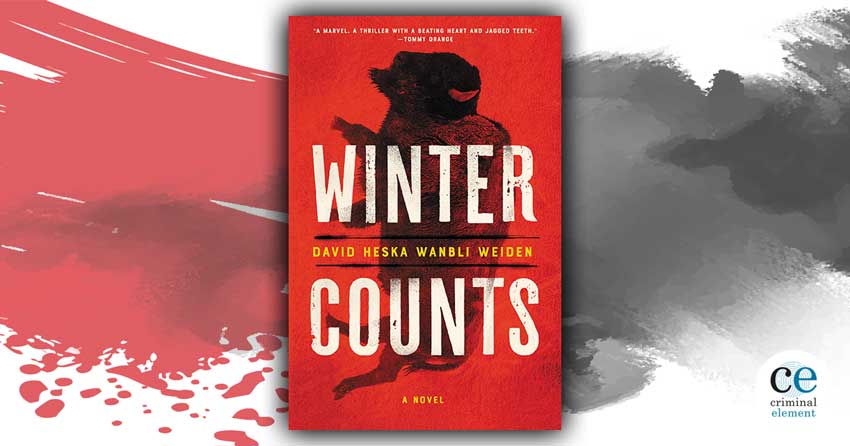 Winter Counts by David Heska Wanbli Weiden is a bracingly honest look at a long-ignored part of American life as well as a groundbreaking thriller about a vigilante on a Native American reservation who embarks on a dangerous mission to track down the source of a heroin influx.

It has been over five years since I last reviewed an #OwnVoices mystery novel with an American Indian protagonist (Win and Meredith Blevins’s award-winning The Darkness Rolling), so I was super excited to receive a copy of David Heska Wanbli Weiden’s Winter Counts. Our hero, Virgil Wounded Horse, is a vigilante for hire on the Rosebud Indian Reservation, an unfortunately needful occupation given the bizarre red tape that prevents Natives from pursuing justice through codified legal systems.

By federal law, tribal police couldn’t prosecute any felony crimes that happened on the rez. Jerome had told me that this law was because of the murder way back in the 1880s of Chief Spotted Tail. The killer had been banished, but not jailed. He said the wasicus were so upset by the Native way of justice that they passed a law taking away our right to punish our own people. So tribal courts could only charge misdemeanour crimes—little stuff, like shoplifting or disorderly conduct. The tribal police had to refer all felonies to the federal investigators. But the feds usually declined to prosecute most of them. They’d follow through on some, usually high-profile cases or violent crimes. But standard sex assault cases, thefts, assault and battery–these crimes were usually ignored. And the bad men knew this. It was open season for raping any Native woman, so long as the rape occurred on Indian land.

When the legal system broke down like this, people came to me. For a few hundred bucks they’d get some measure of revenge. My contribution to the justice system.

As the book opens, Virgil is practicing his chosen trade while taking care of his beloved 14-year-old nephew, Nathan. Life is hard on the reservation, but they both are managing, and Virgil is able to essentially charge on a sliding scale. So when his ex-girlfriend’s dad, Ben Short Bear, offers him a pretty large amount of money to look into a situation, Virgil isn’t so tempted by the cash to jump into things without first making a few inquiries of his own.

Ben is a respected, longstanding member of the tribal council who is currently eyeing a run at its presidency. He never approved of his beloved younger daughter, Marie, taking up with a man he and his snobbish Osage wife, Anne, view as little better than a hired thug. He’s willing to let bygones be bygones, however, in the face of an insidious new threat to the Lakota way of life. Heroin is making its way onto the reservation, and he wants to hire Virgil to track down the supplier, Rick Crow, and scare him straight.

Rick just happens to be the ringleader of the bullies who tormented Virgil throughout high school, as well as the guy Marie had a rebound relationship with after breaking up with Virgil. Saying that Virgil has a lot of complex feelings about this is an understatement, but when the heroin problem hits a little too close to home, it’s clear what Virgil has to do next. With Marie’s insistent assistance, Virgil must track Rick down to gangland territory in Denver and figure out a way to protect his people—even as he comes to terms with what it means to be Native American in the 21st century.

Virgil is a terrific protagonist, conflicted but self-aware, capable of great sensitivity and great violence both. He believes in his people and their culture but is also deeply skeptical of their spirituality, stoically putting up with do-gooding Marie’s constant striving to be a “super-Indian” whose Native roots are unimpeachable, an over-compensation instilled in her via traumatic school experiences.

There are so many facets to American Indian life on display in this wonderful book, touching at least lightly on many of the concerns important to one the most poorly treated racial demographics in this country. Mr. Weiden is as deeply cognizant of contemporary issues as he is of Lakota culture and history, infusing every scene with authenticity and illustrating Virgil’s own moral crises, as in this early scene with a target he’s been hired to deliver rough justice to:

I wondered if I should let Guv go, show him the mercy I’d never been given. That was the Lakota way, wasn’t it? Wacantognaka, one of the seven Lakota values—it meant compassion, generosity, kindness, forgiveness. I remembered the lessons from my teachers back at school. They’d taught that the greatest honor, the greatest bravery, came when a warrior chose to let his enemy go free and touched him with the coup stick. Legend was that even Crazy Horse had shown his courage by counting coup on a Pawnee warrior once, chasing him across the river, but deciding not to kill him, to honor his bravery and grant him his freedom. I knew that the honorable thing to do—the Lakota way—was to set Guv free without any more punishment.

In addition to being a heartfelt and occasionally searing look at modern American Indian life, Winter Counts is also a really gripping crime novel that interrogates corruption on reservations, the fraught relationship between Natives and federal law enforcement, and the need for violence in the face of de facto lawlessness. It’s thoughtful and thrilling as well as, perhaps surprisingly, a craving-inducing showcase of Native cooking. It’s a terrific debut for a gritty crime series as well as for Mr. Weiden’s unique voice in the genre.