Book Review: Who Slays the Wicked by C.S. Harris 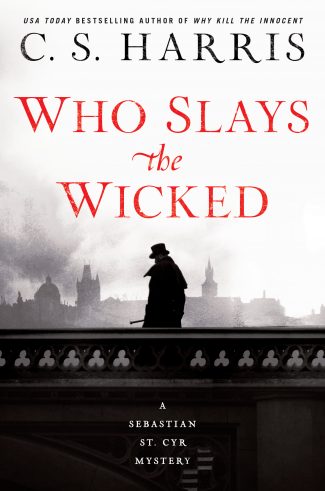 Who Slays the Wicked

In C.S. Harris’s Who Slays the Wicked, the 14th book in the Sebastian St. Cyr series, a fiendish nobleman is murdered, and Sebastian is tasked with finding the killer. The case strikes especially close to home for Sebastian, who must save his cousin from accusations of involvement.

Lord Ashworth, the “only son and heir of the Marquis of Lindsay,” is found hacked to death. Gazing at “blood-soaked fine linen sheets beneath his lordship’s mutilated body,” Magistrate Sir Henry Lovejoy proclaims it a “ghastly sight.” The young viscount’s appearance is sordid and seedy: “Silken red cords tied the dead man’s widespread hands and feet to the bedstead’s stout wooden posts.” Lovejoy sends word of Ashworth’s death to Sebastian St. Cyr’s Brook Street residence: he’s counting on him to help solve the murder. Sebastian, the heir to the Earl of Hendon, has entrée to highest ranks of the haut ton.

Just seven months before, Sebastian had suspected Ashworth of aiding one of his longtime friends and companions in the kidnapping and murder of a string of vulnerable street children. But Sebastian was never able to prove Ashworth’s complicity. Nor was he able to prevent his troubled, headstrong young niece Stephanie from entering into a disastrous marriage with the dangerous nobleman.

Stephanie, now the mother of twin boys, quickly left Ashworth’s degenerate household.  She and her boys are in residence at the Marquis’s London mansion. London society “knows” that Stephanie hated her husband: she is suspected of an involvement with Russell Firth, an up-and-coming young Welsh architect. The Earl of Hendon tells his son that they were seen in Hyde Park: “Simply standing together by the water. Talking. Laughing.”

Sebastian studied Hendon’s troubled face. “Stephanie might not be the insufferable snob her mother is, but somehow I find it difficult to believe she’s suddenly taken to consorting with some random architect-builder. There’s probably a simple explanation.”

When someone is killed, and the world rejoices, does it matter who did the dirty deed? Sebastian’s young tiger Tom says, “Ye ask me, whoever killed ‘im done the world a favor, getting’ rid o’ that cove.” Unfortunately, the murder of a marquis’s son can’t be swept under the carpet: “… it won’t matter if the person they finger is guilty or innocent, as long as he hangs.” Make that “he, or she.”

Read a review of What Darkness Brings by C.S. Harris.

Such is the situation in which Sebastian finds himself. To prevent an innocent person from being charged as Ashworth’s murderer, Sebastian decides to help Lovejoy. Who Slays the Wicked picks up the story of Where the Dead Lie, the 12th Sebastian St. Cyr mystery, when, try as he might, Sebastian is unable to bring Ashworth to justice. He pulls on all the strings of that earlier murder to see who, among the many who hated Ashworth, might have been driven to kill.

Sebastian’s wife Hero’s lifework is documenting the unseen lives of neglected members of society; street-sweepers; rag-and-bone men; and pure-finders (people “who collected dog faeces for sale to tanneries).” These workers are mistreated, and many are displaced—torn from the English countryside through the Enclosure Act, only to wash up on London’s unfriendly shores. Hero alerts Sebastian to how observant these hidden workers are, which leads him to visit London’s most dangerous haunts although no disguise prevents him from standing out among the riff-raff and dispossessed.

Not that Sebastian neglects to consider if an aristocrat or someone even higher in the ranks might have hated Ashworth enough to kill him. His inquiries lead him to Russian Grand Duchess Ivanna Gagarin. Her reputation is somewhat unsavory, and she’s known to have had dealings with the dead viscount. She says Ashworth confided that Sebastian threatened his life: “On more than one occasion, actually.” Sebastian has no use for comforting lies.

She rested a hand fleetingly and ever so lightly on his arm, and he was surprised to feel his skin crawl. His reaction to her was that powerful, that visceral. She said, “It makes for an interesting dynamic, does it not? For you to investigate the murder of a man you yourself threatened to kill?”


He held himself perfectly still. “If nothing else, I suppose it give me some insight into the motivation of his killer.”

Kat Boleyn, Sebastian’s natural sister, sums up the prevailing feeling about Ashworth’s death: “Frankly, I’m glad he’s dead.” But Sebastian can’t accept that as an answer, especially since there’s evidence that a woman was at the murder scene. Although he doesn’t believe his niece Stephanie is being entirely truthful with him, he doesn’t think she’s a murderess.

The case forces Sebastian to re-examine his prevailing opinion on evil, that it “is simply a lack of good—the same way darkness is a lack of light.” That definition doesn’t fit the deliberate malevolence and fury of Ashworth’s staged execution.  C.S. Harris delivers a bone-chilling treatise on evil, an answer to “Why do people murder?” Obviously, the answer is ordinarily as “varied and idiosyncratic as the people who killed.”

But in his experience, most of their motives could be reduced to five common human emotions: greed, whether for money or power; love, or at least sexual lust; fear; jealousy; and revenge.

But there existed another breed of killer, and those were the ones Sebastian believed belonged in a category all their own: the men and women who killed for pleasure.

Isn’t that poetic justice, since Ashworth was like that—it was not enough for him to kill his victims, he reveled in their pain and suffering—which was what made him such a vicious individual. In Who Slays the Wicked, Sebastian must find such a monster, and quickly, since there is a mounting body count in the wake of Ashworth’s murder.