Book Review: Who Did You Tell? by Lesley Kara

June 18, 2020
In Who Did You Tell? by Lesley Cara, a recovering alcoholic moves to a quiet seaside town away from the temptations and darkness of her previous life. But someone knows what she's done and where she is... 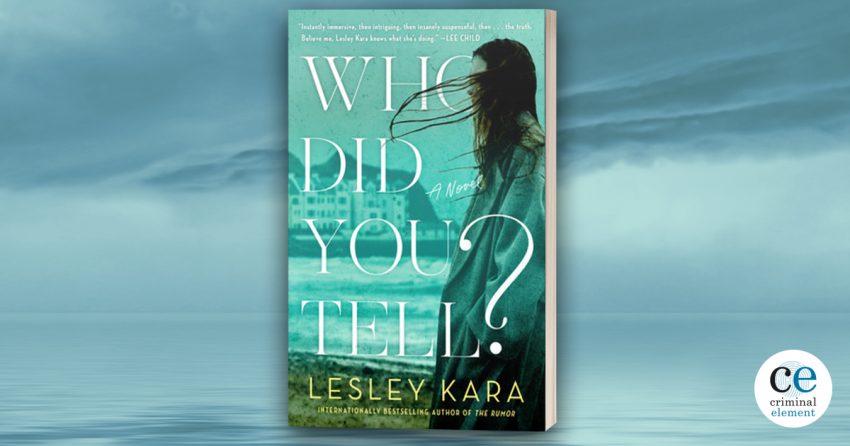 Who Did You Tell? is set in the imaginary seaside town of Flinstead, also the setting for Lesley Kara’s first book, The Rumor, a psychological thriller. Flinstead is not a salubrious seaside resort. It’s a bit down-at-the-heels, but twenty-something-year-old Astrid doesn’t have a choice. After living in London for years, she’s newly sober and back under her mother’s roof.

Mum pounces on me like a sniffer dog the second I walk through the door. “Where’ve you been? I’ve been worried sick.” Her fingers dig into my arms and I have to shake her off.

“It’s only ten o’clock, Mum. You can’t keep doing this. You’ve got to trust me.”

The snort is out before she has a chance to think better of it. “Trust? You’re talking to me about trust?”

Five months ago, Astrid hit rock bottom ending up in a hospital, and subsequently rehab. There are slogans that underline and bolster fledgling sobriety, particularly the exhortation to stop drinking, “One Day at a Time.” Alcoholics Anonymous members, especially newbies, are told “Easy Does It,” “Keep It Simple, Stupid,” and “Progress, Not Perfection,” but Astrid is distracted from the task at hand. She’s being stalked, haunted, pursued, by bone-chillingly fearsome incidents. In her past, she had a troubled relationship with a man named Simon, a boozing boyfriend. She’s convinced that she smells his aftershave.

I smell him first, or rather the aftershave he used to wear. Joint by Roccobarocco. A ‘90s vintage scent—masculine and woody. A discontinued line. I spin around, but no one’s there.

The terror is quite subtle at first, but step by step, it ratchets up. Astrid has vivid night terrors. She thinks she sees Simon everywhere, particularly when she’s off walking at night. But has she? It’s not unusual for there to be an unreliable narrator in a mystery, particularly when there are flashbacks, but Astrid is genuinely scared. She sits down in a deserted café after an AA meeting in order to shuffle through her experiences. She’s nervous but it’s a matter of pride.

To prove to myself that I’m not scared. That I don’t believe for one second that it was really him.

Once I would have said he wasn’t spiteful enough to come back. But that was before.

Yesterday, it went like this: we were standing on the pier at Mistden Sands and I just pushed her in. She was wearing those stupid Doc Martens she clumps about in and, what with them and her big, heavy coat, she couldn’t keep afloat. I stood there, watching as she thrashed about, and waited for her to sink.

Astrid wears Doc Martens. Astrid’s coat is big and heavy. So what’s going on? Is this gaslighting? The incidents don’t go away, rather they get closer and closer to Astrid’s life. Unless she’s imagining everything?

Could she be reeling from the intensity of the AA meeting? Everyone there has experienced pain, sorrow, and loss but Astrid is stuck at AA’s famous first step: “We admitted we were powerless over alcohol – that our lives had become unmanageable.” She can’t transition to Step 2, colloquially known as Let Go and Let God.  She remembers, “even as a small child, something inside me resisted the notion of a higher power.” No doubt, the first year of abstinence is incredibly difficult for most recovering alcoholics.

Nonalcoholics know the rules of AA too, as when Astrid’s mother, after Astrid admits to having coffee with an attractive young man, reminds her of the rejoinder against forming any attachments in the first year of sobriety.  But Astrid is eager to escape from home as frequently as possible, and she takes endless walks along the beach. She strikes up a conversation with a healthy young guy wearing a wetsuit. He tells her he’s between jobs.

“Me too. I’m keeping an eye on my mum.” A gull screeches overhead—a harsh, mocking sound. “She’s…a bit depressed.” Guilt snakes through me. I can hardly tell him the truth. Someone like him—so healthy, so wholesome—he’d run a mile. And I don’t want him to. Not yet.

Of course Astrid feels guilty. She’d be rough sleeping if her mother hadn’t taken her in. And lies beget lies: every time she and Josh meet, he asks her how her mum’s doing. Alcoholics believe that “You’re only as sick as your secrets” and Astrid is keeping secrets aplenty from Josh, from herself, and from her mother. Secrets that are bound to come out because in a small town, how do you maintain the anonymity expected from an AA meeting? Astrid is troubled, haunted by her past, cognizant of all the amends she must make to everyone she harmed during her wild drinking days. But she has a core of truthfulness and self-awareness that is very appealing. If only she can make it out of Flinstead alive.

New York Times bestseller Lee Childs sums up the intense allure of Who Did You Tell?— “Instantly immersive, then intriguing, then insanely suspenseful, then . . . the truth. Believe me, Lesley Kara knows what she’s doing.” All true. Lesley Kara has so many different balls in the air: a tortuous path to sobriety, an adult’s relationship with a parent, a tentative romance—with menace underlying every passage—but she weaves it together masterfully.