Book Review: Wherever She Goes by Kelley Armstrong 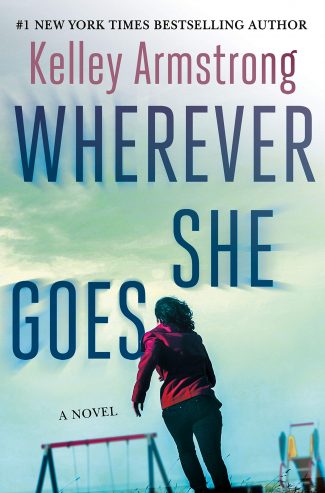 From New York Times bestselling author Kelley Armstrong comes Wherever She Goes—a brand new psychological thriller about the lengths one woman will go to in order to save a child.

Kelley Armstrong is one of the most versatile authors out there right now. She writes urban fantasy and fantasy, and with Wherever She Goes, she’s once again proven her chops as a talented craftswoman of crackling thrillers featuring fascinating characters, such as 30-year-old single mom Aubrey. Aubrey has a three-year-old little girl named Charlotte and an ex-husband named Paul, who is a defense lawyer. One might think that Aubrey is living a comfortable life on alimony, but that’s not the case. In fact, she’s living in a small apartment on the outskirts of Chicago that she pays for with her job at the library, and she refuses to take one penny from Paul. Aubrey has some secrets that she doesn’t want Paul to find out, because she’s afraid he’ll try to take Charlie away from her, which, of course, is her worse nightmare.

Unfortunately for Aubrey, her past is about to come back to haunt her when she witnesses a child being abducted from a park. She sees the little boy, who she recognizes from a previous encounter with his mother (who is noticeably absent) and is alarmed when he starts running toward an SUV pulling into the parking lot.

Mom must have gone to fetch the car, unable to find a spot in the lot. She’s told him he could swing for a few more minutes while she brought the car around. Not the choice I’d make but—

A sharp boyish yelp of surprise. Then, “No!”

I grit my teeth and will my body to go faster, just a little faster, damn it.

The SUV takes off, speeding through the lot, and all I see is that damned roof rack.

Faster! Harder! I hear my father’s bark. Dig deeper. Work harder. You can do better, Bree.

You can always do better.

Aubrey tries to take a picture of the license place, but it’s obscured by mud. When the police arrive, she has precious little to give them. She doesn’t know his mom’s name and can only describe him as a blond-haired little boy. When she follows up, they tell her that until a child is reported missing, they have no case. Aubrey is frustrated because she knows what she saw. When a woman’s body is found in the park, Aubrey is convinced that it’s the boy’s mother, and vows to find the truth.

Luckily, Aubrey’s got some skills from her past she can mine for her search. She happens to be a skilled hacker who once attended MIT before her beloved father, a veteran who suffered from PTSD, died from suicide and sent her into a tailspin that led her into some dicey situations and a criminal past. The statute of limitations has run out on her crimes, but it doesn’t matter. If Paul found out, he’d never let her see Charlotte again. But Aubrey can’t bear to see a child in danger, and since no one seems to be taking her seriously, she takes matters into her own hands, leading to a cat and mouse game with sky-high stakes.

Moms of all different stripes will probably recognize a bit of themselves in Aubrey. Society largely expects women to always be natural mothers, knowing just what to do and how to act at all times. Aubrey, who narrates readily and refreshingly, admits that mothering doesn’t come naturally to her, that although she loves her daughter fiercely, she has to work at it every day. At first, she’s very self-deprecating, to the point of self-punishing, but that lessens as the story goes on and Aubrey rediscovers her strengths, including all the things she put aside in order to become a wife and mother. To be fair, it’s clear that Paul didn’t demand these things of her, this is a choice she made because she assumed that Paul wouldn’t want her if he knew about her past. Armstrong also resists the urge to make Paul the bad guy. He’s just a dad trying to do his best in a very uncertain situation. And people are messy.

Armstrong effectively weaves together a fast-paced thriller with a story about a complicated woman who strives to do the right thing, even as she faces some very hairy situations and some very dangerous people. This twisty page-turner is the perfect summer read.