Book Review: When No One Is Watching by Alyssa Cole

September 1, 2020
In When No One Is Watching, a gripping new thriller from Alyssa Cole, the gentrification of a Brooklyn neighborhood takes on a sinister new meaning… 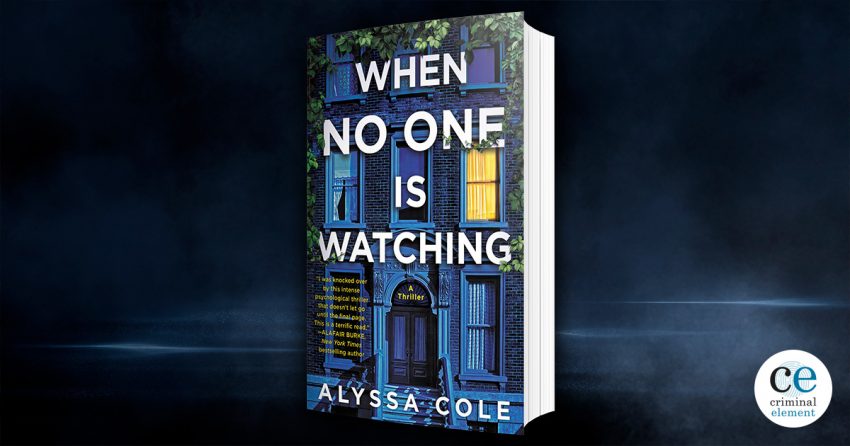 When I was a teenager, Mommy and Drea and I would picnic on the roof every Fourth of July. Brooklyn sprawling around us as fireworks burst in the distance. When I’d clambered up there as an adult, alone, I’d been struck by how claustrophobic the view looked, with new buildings filling the neighborhoods around where there had once been open air. Cranes loomed ominously over the surrounding blocks like invaders from an alien movie, mantis-like shadows with red eyes blinking against the night, the American flags attached to them flapping darkly in the wind, signaling that they came in peace when really they were here to destroy.

Sydney Green has spent nearly all of her life in Gifford Place, a brownstone-lined block in Brooklyn. Frustrated by a historical tour that whitewashed the neighborhood, she decides to put together her own to showcase the true history—and shine a light on the notable people who still call the Place home.

When newcomer Theo volunteers to help her with research, she’s hesitant. Coming off of a divorce and her mother’s long illness, the last thing she needs is an eager, attractive white boy who’s living with another woman.

But Theo is really the least of her concerns. Things are happening to her neighborhood. Lifelong residents are disappearing and hostile yuppies are moving in. Small businesses are being squeezed out, good kids are getting arrested, and more and more cops are patrolling the street.

The three-block walk to the beauty supply to pick up my hair feels like I’m moving under water. It strikes me when I’m walking that several of the stores on just this short stretch are new. The West Indian fruit and veggie store is still here, as are the patty shop and the nail salon, but the pet store where I got my first goldfish is gone. The barbershop where older men used to congregate and play jazz records is now a home goods boutique. And the halal market is a thrift shop that has price tags more expensive than neighboring stores that sell brand-new items.

I start walking faster, pushing through the fatigue as a single terrifying thought possesses me: What if the beauty supply is gone? I passed it two days ago, but…

None of it feels like typical gentrification. It’s all happening too quickly, and Sydney starts to wonder, amidst dozens of harassing phone calls from realtors desperate to sell her house, if something more is happening. Something insidious.

“What are you trying to say?” Kim’s eyes are wide and her lips are pressed together and oh hell, that expression never precedes anything good.

“I’m saying that even if you didn’t see me, when you realize you’ve made a mistake, you don’t ignore me and continue making your purchase. You move away and let me make mine. Like a civilized person.”

Kim’s face is pink now. “You need to stop attacking me.”

The woman tilts her head in confusion. “Attacking?”

“You’re making me feel unsafe and if you don’t stop, I’ll—I’ll call the police.” There’s a malicious glee on her face as she says it… An expression that says, I’m fucking with you just because I can.

As Sydney and Theo begin to trust one another, they realize they can’t trust anything or anyone else around them. Are their suspicions well-founded? Is there truly a far-reaching conspiracy playing out beneath the surface, one hidden by societal gaslighting at a massive scale? Or is their paranoia the result of personal upheaval and financial strain?

Alyssa Cole is best known for her wildly popular and award-winning romances—quick pause to strenuously recommend her Reluctant Royals series—but When No One is Watching proves she’s a master at crafting spine-chilling thrillers, too.

When I review books, I try to maintain a detached and impartial tone. But, good Lord, that is impossible with this one. Few stories have felt so real, so visceral, or so disturbing. At one point, Sydney mentions feeling like she’s “neck deep in wet cement,” and that’s a fitting description: this is a painfully timely thriller that pulls you under a claustrophobic wave of paranoia and unease, rarely letting you surface for air. With each page, you’ll find your heart rate spiking significantly.

Some are describing this as “Rear Window meets Get Out”, and that’s certainly apt: this feels like a Jordan Peele movie you hold in your hands. Right out of the gate, Cole submerses us in historical, factual horror. The dark underbelly of America—beginning with the slaughter of indigenous people by white colonizers—permeates everything. From there, Cole steadily layers in all-too-plausible psychological terror, from micro-aggressions to vicious attacks.

Watching is definitely not for the faint of heart. Triggers abound as Cole pulls no punches, incorporating many of the daily, systemic oppressions BIPOC face: hateful language, false police reports, the War on Drugs, profiling, and Othering.

“You keep saying ‘them’ and ‘those people’ when you mean our neighbors who were just now nefariously choosing time slots for who was going to oversee the bouncy castle,” I say slowly. “So, yes. It is ridiculous.”

Terry smirks at me, a mean and familiar curve of his mouth upward, and I realize he doesn’t mean “our neighbors.” He’s thinking something much worse.

Readers of color will find themselves nodding in agreement and wincing in empathy for Sydney. Performative allyship is ruthlessly skewered as the rotten heart of racism is revealed behind smiling white faces, and Cole makes a special point to shine a light on white women’s contributions to the deadly status quo; hanging a portrait of Michelle Obama in your living room or marrying a Black man does not give you a free pass.

Sydney feels like a real, breathing person. A woman whose righteous anger is unapologetic and vital to the story. She’s smart, prickly, fiercely independent, and protective of her community. Cole makes it clear that she’s strong as hell, but also allows her to be vulnerable and show weakness. Seeing a Black woman fight back as she does is sure to be cathartic for readers who have lived so many of her experiences. Theo, her co-narrator, is also refreshingly complex. He’s not an anti-racist paragon or a perfect white knight; he makes mistakes along the way and has suffered his own trauma. But he puts the work in to be a worthy partner to our heroine, and Cole uses him to illustrate that poor whites have more in common with BIPOC than the white elites—both groups are equally exploited and oppressed.

Of all the thrillers to hit stands this fall, When No One is Watching deserves to be at the top of the pile. It’s one of the most relevant modern horror stories I’ve encountered, with killer prose, vibrant characters, razor-sharp societal commentary, and a knockout of a finale. Absolutely guaranteed to keep you up all night—and make you look at the daily news reports with narrowed eyes.