Book Review: When It’s Time for Leaving by Ang Pompano 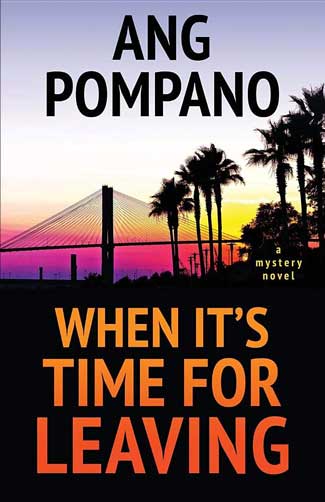 When It's Time for Leaving

When It’s Time for Leaving by Ang Pompano introduces former police officer Al DeSantis, who must deal with his past, his estranged father, and murder in this debut novel.

Connecticut’s Ang Pompano has been writing mysteries for more than two decades. While his first novel, When It’s Time for Leaving, just came out, his short stories have appeared in several collections, including Malice Domestic’s 2019 anthology, Mystery Most Edible. Pompano has also written several academic pieces, including one on teaching detective fiction. He is a member of Mystery Writers of America and once received the Helen McCloy/MWA Scholarship for a novel in progress. He is also a brother member of Sisters in Crime and longtime board member of their local chapter. Additionally, Pompano has served on the planning committee for New England Crime Bake for 14 years.

When It’s Time for Leaving introduces beleaguered policeman Al DeSantis, who quits the New Haven PD after a particularly bad stretch in which his girlfriend leaves him for a fellow cop and then he’s nearly killed in a high-speed altercation with a local drug dealer. Having severed those ties, he plans to relocate to a condo in Los Angeles and begin anew—until the past comes calling. It turns out that DeSantis’s father, who abandoned him as a child and was said to be dead, is actually living in Savannah, Georgia, where he’s just been admitted to a nursing home for dementia care. But not before deeding his business, the Blue Palm Detective Agency, to his son.

While Al expects his time in Savannah to be short—after all, he’s only there to tie up some loose ends—the discovery of a dead body washed up on the agency’s dock tends to indicate that things are going to be far more complicated. So, too, the fact that he keeps getting calls from the nursing home threatening to discharge his frequently agitated and defiant father, Big Al. Despite not wanting to have any contact with the man, young Al can’t risk the repercussions and begins to take his father out for periods of respite; Big Al still has a PI’s inclinations and believes he’s now on the case with his new “partner.” But when he goes missing in the aftermath of a second killing and evidence starts to incriminate him in the crimes, it becomes Al Junior’s job to find his father and the real killer before there’s a devastating miscarriage of justice.

Pompano infuses the mysteries at hand with learnedness and levity, but it’s the ensuing relationships that compel our emotional investment. In addition to the well-drawn, exasperating-yet-endearing dynamic between father and son, there’s also Al Junior’s comedically awkward romance with a new superior, his begrudging battle of wills with the nursing home’s care coordinator, and a (mostly) respectful rivalry with the case’s lead detective, among others. Each of these associations has a distinct tone and serves a distinct purpose, revealing nuanced layers to a character of surprising depth. The disarming first-person narration compliments his transformation beautifully while fostering a sense of intimacy between Al and the reader. If only he’d cut down on the “dude” speak a bit.

The book is an impressive achievement for Ang Pompano, who admirably proves that time is but a test of talent and tenacity. When It’s Time for Leaving is a fun, and fine, piece of PI fiction worthy of a place on every aficionado’s shelf. We can only hope that the author and his equally memorable protagonist stick around for a long while yet.