October 28, 2021
In When Christmas Comes by Andrew Klavan, a sleuthing English teacher will need a Christmas miracle to prove a condemned man innocent... 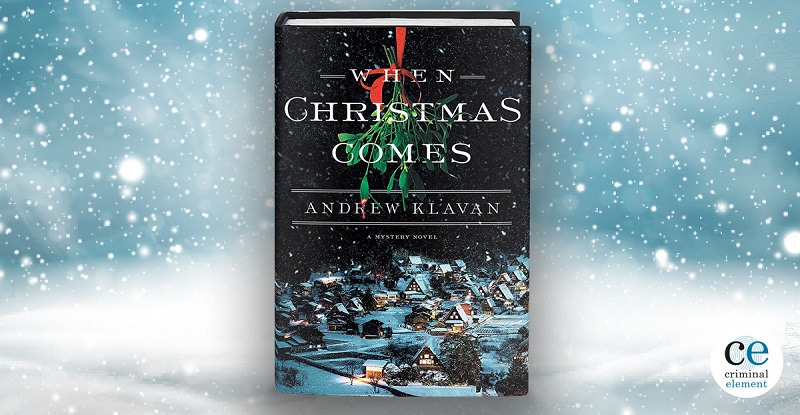 Andrew Klavan is a bestselling author, screenwriter, and podcaster. The recipient of two Edgar Awards and a Thumping Good Read Award, he’s also had his work adapted for film—including True Crime (directed by Clint Eastwood) and Don’t Say a Word (starring Michael Douglas). Klavan’s books range from thrillers and hard-boiled mysteries to YA and non-fiction. His newest book, When Christmas Comes, is a holiday-themed novella published by Mysterious Press.

It’s Christmastime in the idyllic town of Sweet Haven—the lakeside home to an abundance of military veterans living on the outskirts of Fort Anderson. But not all is merry and bright. War hero Travis Blake, a third-generation Army Ranger and recipient of the Silver Star for his bravery in Afghanistan, stands accused of murdering his lover, Jennifer Dean, a librarian at his daughter’s elementary school. Though Travis has confessed to the crime, his lawyer, Victoria Grossburger, has a gnawing suspicion that the full story hasn’t been told. Shunned by her client, she turns to an old flame for help. Enter English professor Cameron Winter, a loner whose track record speaks for itself.

At once charmed and sobered by the scenic surroundings, Cameron sets about completing the investigation that local authorities haven’t; after all, they’ve got their man, right? While Blake unquestionably returned from war a deeply troubled man (a state further compounded by his wife’s death), it’s the enchanting yet enigmatic Jennifer who raises red flags. A model employee and angel on Earth, she nevertheless appears to have landed in Sweet Haven without a history. Just who was this woman who managed to rekindle Blake’s passion only to see it seemingly turned against her?

As Cameron endeavors to untangle the mysteries of the present, he’s also reckoning with the ghosts of his own past. In memories recounted to a psychotherapist, we learn about his lonely childhood, save for the Christmases he spent with his nanny’s family—including beautiful Mia, the source of a great unrequited love. Cameron’s disillusionment with domesticity and romance has largely shaped his solitary nature and activities, which includes unspeakable acts that he’s still reckoning with. Revelations about Jennifer and Blake—and their complicated relationship—resonate deeply, resulting in an emotional investment that could have deadly consequences.

The author’s prose—which is economic and often poetic—alternates between cerebral and sentimental, incorporating both intellectual discourse and nostalgic remembrances. And while the depictions of crime and depravity are appropriately stark, they’re offset by a sense of whimsy that captures the atmospheric embellishments of the season:

A church tower looked down on neat, well-tended clapboard houses and Victorian manses, all of them dressed up in lights for Christmas. Toward the center of town, office buildings of brick and stone were hung with wreaths and crosses. Winter-coated companions, friends and lovers walked in the park on paths through snowy hills and on stone bridges over the icy river. On the lonely winter bench by the lake, a single man looked out at the vast expanse of glittering water.

Andrew Klavan’s When Christmas Comes is a masterclass in mysteries of the melancholic kind. It’s also proof positive that the old adage about good things coming in small packages remains true. This book, like the best stories, is deeply haunting yet ultimately hopeful.