Book Review: What We Did by Christobel Kent 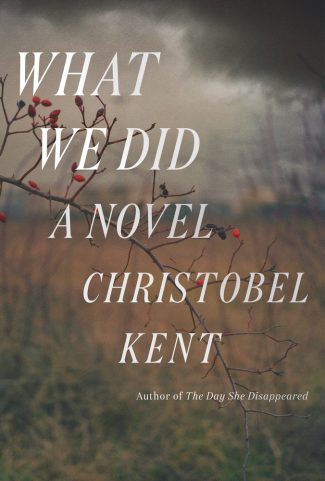 Bridget has a secret—one she keeps from everyone, even her husband. What We Did by Christobel Kent is a nightmarish tale of the secrets we keep from our families, of chilling childhood abuse, and of long-awaited retribution.

Bridget is happy. She has her own little dress shop in Rose Hill, England, a teen son, Finn, who she adores, and a gentle, kind husband in Matt, who handles IT for the nearby university. It’s a happiness, that as a child, she never thought she’d have. When an older man comes in the shop with a young girl, Bridget thinks it’s an odd pairing. He doesn’t seem to be her father or grandfather, but it’s really none of her business, right? She just gets a strange feeling about the pair. Turns out Bridget’s instincts are pretty good because as soon as she hears his voice, she’s transported back all those years ago when she was a young girl learning violin. Anthony Carmichael, her childhood violin teacher, is in town teaching at the university, and that was definitely not his daughter or his granddaughter. Bridget is near panic. He didn’t seem to recognize her, but she definitely recognized him.

Bridget felt as thought she could hardly breathe, then she began to feel something else, something she couldn’t control: it wound its way up inside her, a tapeworm; a viper; a dragon. He was putting his credit card away when abruptly he looked at her in the eye, and she had to hold his gaze.

Older, hair thinner, turkey neck. Sandy eyebrows. He smiled. He smiled at her.

Bridget goes back to her life in a bit of a panic, and desperately trying to contain it. It’s like a seismic shift has happened. Just his existence, somewhere nearby, is enough to throw her into a tailspin. As soon as poor Bridget starts to relax a bit, Carmichael returns to the shop, and she happens to be there alone, without the company of her assistant, Laura.

Turns out he did recognize Bridget, and he can’t resist getting close to her. Threatening her.

He began to talk in a way she remembered, with horror. And although she tried to blot the words out, the tone was so familiar, the memory bringing sickness up inside her, up from her gut: he was very reasoned, smiling all the time, although his eyes were different. She remembered that, too: his eyes dead and flat and cold while his voice was smooth and warm.

Bridget is terrified, transported back to a time in her life that she’s worked so hard to keep inside, to forget.

Bridget felt so abruptly sick she put a hand to the doorframe to steady herself. She remembered him talking this way while doing things to her body. Images flashed into her head, blinding her. The shock, the horror of it, the first time it happened: the violence of a hand pushing her down, wool choking her. She backed away from him, into the kitchen, the room so small the stepladder clattered as she bumped into it.

Thoughts of the girl he came in with fill her head, and it’s not long until Bridget has had enough. She takes matters into her own hands. Soon after, her troubled sister Carrie shows up, having had a fight with her girlfriend. Carrie needs to stay for a few days, which just throws one more complication at Bridget. And Bridget has a lot on her plate.

Meanwhile, reporter Gillian “Gill” Lawson has suspected Carmichael of sex crimes for years, and when she sees that he’s turned up in Rose Hill, she grabs the opportunity to do her best to take him down. As Carmichael’s disappearance inevitably gains attention, Bridget becomes increasingly paranoid and desperate to keep her life intact, but, of course, it’s not that easy. Things never are.

Fair warning: If you’re looking for a fast-paced read, this is not that read. Although certainly suspenseful, it’s a very psychologically astute slow burner, and Kent does a great job exploring the aftermath of sexual abuse and of the tendency for women and girls to internalize sexual trauma. Bridget has never shared Carmichael’s abuse with Matt, and the thought of him looking at her with something like pity is something she can barely stand to imagine. Kent’s lyrical, conversational writing style belies the undercurrent of menace that thrums below the surface, and Carmichael rises from the page like a crocodile emerging from a stagnant swamp. His vileness is palpable to Bridget and to readers, but to everyone else, he’s a star in the classical music world. Bridget can’t imagine even attempting to go against someone like that. There is a bit of a twist at the end, but this is ultimately the story of Bridget coming to terms with her horrifying ideal and taking control of her life, with a little help from the people that love her, especially the females in her life. Things do get dark, but Kent’s conclusion is satisfying, and most importantly, hopeful. This one will resonate.