July 26, 2022
Barbara Graham's What Jonah Knew is a literary thriller packed with psychological suspense and questions about motherhood, trauma and how death illuminates life. Check out Doreen Sheridan's review! 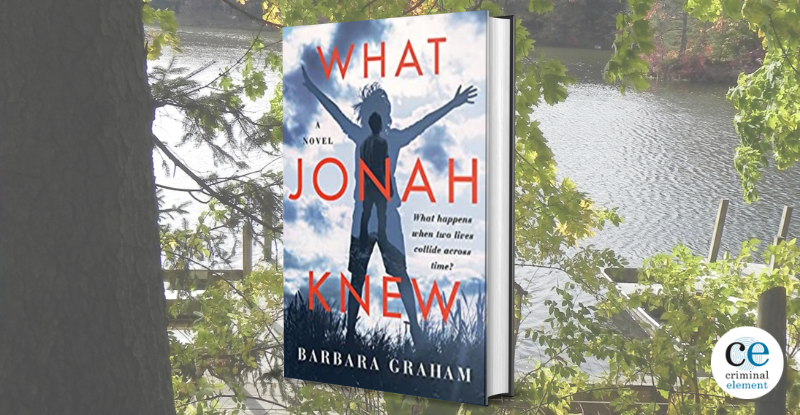 When twenty-two-year-old Henry Bird goes missing one night, his mother and pregnant girlfriend are completely at a loss. Henry was last seen by his bandmates leaving their performance venue. Things hadn’t gone as well as Henry wanted with their second set, so he elected to walk back to their motel by himself to blow off steam. His bandmates assume he’s sleeping in the next morning, but grow worried when they later discover all his stuff gone from his motel room.

Henry’s concerned mother Helen immediately calls the police, but they assure her it’s far more likely Henry took off of his own volition than he was the victim of foul play. Helen, however, knows her son far better than that:

Viewed from a certain angle, Detective Handler’s theory made sense. Given Henry’s landscaping job, double duty as Dog Radio’s fiddler and manager, his relationship with Mira, and a baby coming, he was under massive pressure for anyone, let alone a twenty-two-year-old. Only this was <i>Henry</i>, whose maturity and sense of responsibility, even as a young boy, had outpaced his years. Henry was not a person who took time-outs, any more than Helen was a person who lolled around waiting for something to happen. They were scrappers. Survivors.

Helen, you see, had escaped an abusive marriage over a decade ago, packing up her young son and fleeing east to start a new life in Aurora Falls, a tiny town in upstate New York. The experience drew her and Henry closer, and she refuses to believe he would ever walk out on her or his own young family without a very, very good reason.

As the years pass, her hope that Henry is still alive somewhere begins to fade. His girlfriend Mira has their baby, and Helen does her best to co-parent with the young woman she views as a daughter. But even Mira has to move on, getting married to another man and leaving Helen feeling even lonelier than before, despite frequent visits from her granddaughter.

Helen has just about decided to accept that Henry is never coming back when a little boy walks into her life instead. Seven-year-old Jonah Pressman is the son of Lucie, a neurotic magazine editor who’s constantly pestering her husband Matt about buying a second home in Aurora Falls. While they’ve vacationed there intermittently throughout their marriage, Lucie’s tired of competing with the increasing demand for a dwindling number of rentals. The matter becomes more urgent when city life seems to overwhelm sweet, sensitive Jonah, whose night terrors and other unexplained phobias have his mother at her wits’ end.

Moving to Aurora Falls, even if only for the summer, is a relief for everyone in the Pressman family. But then Jonah starts talking about his other mother—his real mother—and begins to describe things only Helen and Henry knew. Will Lucie be able to overcome her own anxieties in order to help her son and Helen find a strange sort of closure, and perhaps solve a murder mystery in the process?

What Jonah Knew reads very much like a cross between Alice Sebold’s The Lovely Bones and George Saunders’ Lincoln in the Bardo, as what remains of the victim of a terrible crime attempts to reach out to those he left behind. The novel doesn’t choose a cut-and-dried explanation for how all this is happening, recognizing that everyone will have their own opinions on reincarnation or the collective unconscious or even quantum phenomena. Instead, it smartly and sensitively chooses to focus on the best thing to do to help kids who inexplicably carry the burdens of other people’s trauma. In the words of the child psychiatrist the Pressmans contact about Jonah:

“We may never solve the mystery of how one person’s memories show up in the mind of another, but we do know that it happens more often when the previous person died violently. Like Jonah, some of the kids I’ve worked with had an urgent need to complete the earlier life cycle before they could let it go. But as soon as they had permission to express what they remembered, the memories began to lose their power, their actual stickiness to the brain, until eventually they seemed as ordinary and forgettable as last Thanksgiving dinner at Grandma’s.”

It was really nice to read such an even-handed, almost holistic examination of alleged past life trauma in children, in tandem with a dissection of grief. That these issues are all wrapped up in a disappearance and murder mystery only add to the intensity of the read, as a killer begins to feel threatened by Jonah’s revelations. While I didn’t necessarily agree with some of the assertions in the book—particularly with the idea that motherhood makes people “crazy” (pretty certain those moms weren’t terribly rational to begin with)—I found this overall to be an engaging, thoughtful read that embraces a multiplicity of belief systems while championing the power of open-mindedness in the search for true psychological healing.